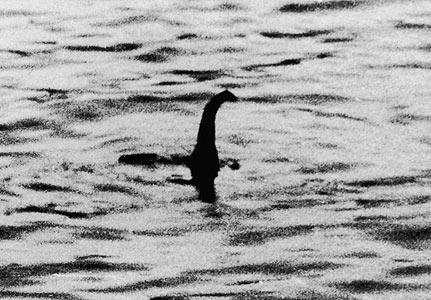 When you look at a 3-D map of the Scottish Highlands , the first thing you notice is a long divide going south-west to north-east, from Fort William to Inverness. This is what is called the “Great Glen”(gaelic : An Gleann Mòr), a large geological fault called the Great Glen Fault, caused by the sliding between the Grampian mountains in the south, towards south-east, and the Northwest Highlands, in the north, towards north-west. The Great Glen south of Inverness is the location of the famous Loch Ness and Loch Ness Monster Legend.

Loch Ness is a deep loch of freshwater. It is one of the largest of Scotland, only beaten by Loch Lomond, but it has the biggest volume of water. It has actually more water than all the lakes of England and Wales altogether. Its deep waters contain several species of fish: eel, pike, stickleback, brook lamprey, arctic char, and of course atlantic salmon and trout… And Nessie….

On the western shore you can visit the mighty Urquhart Castle. At the entrance you are welcomed by a panel telling you that you are following some famous footsteps : St Columba of Iona (AD 580), Sir Andrew de Moray (AD 1297), Sir Donald MacDonald, Lord of the Isles (AD 1395), and Sir John Grant, chief of Clan Grant (AD 1509). There were numerous battles for this castle, which was eventually destroyed by the Williamites in 1692, to ensure it could not be used by the Jacobites as a stronghold. In the castle museum lies a beautiful piece of bronze : the Urquhart Ewer (16th century).

If you want to see and experience Loch Ness from an entirely different perspective make sure to book a trip on one of the many boats that cruise the loch. Jacobyte for instance offers 2 hour cruises starting from Dochgarroch, south of Inverness. Cruise Loch Ness offers shorter trips, they start from Fort Augustus. There is also Castle Cruises, they are leaving for cruises from Drumnadrochit and are close to Urquhart Castle. Based between Drumnadrochit and Dochgarroch are Beastie Boats. They operate a 12person RIB and tend to go a wee bit faster than the others!

Nessie: The Monster of Loch Ness

The most famous monster in the world is the Loch Ness Monster, affectionately known as Nessie, in Latin probably know as Nessiteras Rhombopteryx. Nessie has been a Scottish Legend for some time.

Near Urquhart castle, at Drumnadrochit, you can find the Nessie museum. This is a great place to visit and to find out more about the loch and its history.The Loch Ness Monster (which could be the subject of an entire article) has been reported as early as the 7th century in the Life of St Columba written by Adomnán a hundred years after the facts. St Columba saw the burial of a man who had been attacked by a “water beast” while swimming the River Ness. Hearing this, St Columba sent one of his followers to swim across the river. The beast came to attack him, but St Columba made a sign of the cross and the beast disappeared in the waters.

Sightings of the Loch Ness Monster

The very first Sighting of a mystery creature appears in St Adamnan’s seventh century biography of St Columba, who supposedly calmed an aquatic animal which had attacked one of his Monks. Modern day interests, however is probably much greater outside of Scotland than within the country itself, and dates from the building of the road following the western side of the Loch in the 1830’s. In 1934, the Daily Mail published London surgeon R.K Wilsons magnificent photo of the head and the neck of the monster reaching up out of the Loch, and the worldwide hype has hardly stopped since. More recent sighting range from waves and ripples spotted by fishermen to the more famous occasion in 1961 when thirty guests of a local hotel saw two humps break the Lochs surface and travel for about half a mile before sinking back into the depths of the Loch.

If you are visiting Loch Ness, take the time to stop along the shores and look at the water.
Open your mind and heart, smell the odours and hear the whispers of the wind, and maybe if you are lucky, Nessie will come by to say to you a little Fàilte !

A circular trip around the Loch is the best way to explore the many interesting sites. When you start at Inverness in the morning it’s great to take the old military road, from Inverness to Fort Augustus, on the eastern shore of Loch Ness. You have the sun in your back and you can fully enjoy the stunning views over the loch. Halfway this military road is the village of Foyers which was once an important staging post on the old military road. The original inn at Foyers was first built in about 1655 when Cromwell’s troops had garrisons at Inverness and Inverlochy. General Wade, who built the first military roads and bridges linking Fort Augustus and Inverness around 1732 built himself a shelter called the “General’s Hut” and it has been stated that the building of The Foyers Hotel was on this site. Foyers was the first village in the Highlands to have electricity in each house powered by the British Aluminium Company and The Foyers Hotel was boldly advertised as “the only hotel to have electricity”.

You can go by boat from the Atlantic Ocean, near the Isle of Mull, up to the North Sea at Inverness, using the lochs and the Caledonian Canal, using beautiful locks to go up and down the Highlands. After Fort William, Loch Lochy and Loch Oich, you arrive at Fort Augustus, a beautiful little village at the south of Loch Ness.

In very few places on Earth has watching a grey cold expanse of water ever been so compelling, or have floating logs, otters, surface fish and boat wakes been photographed and filmed so often with such excitement, Yet while even modern high tech sonar surveys carried out over the years have failed to come up with any conclusive evidence , However its difficult to dismiss Nessie as pure myth, after all, no one really knows where the unknown layers of mud and silt at the bottom of the Loch begin or end, best estimates say the Loch is 750ft deep much deeper than much of the North Sea. While others point to the possibilities of underwater caverns and unknown channels connected to the Sea.

What Scientist have discovered in the cold dark depths of the Loch, include pure white eels and rare Arctic Char, offer very fertile grounds for speculation, with different theories declaring Nessie to be a remnant from the dinosaur era, a giant newt or a Hugh visiting Baltic Sturgeon. With the possibility of a definite answer sending excitement through the local tourist industry, Monster hunters these days are supplied with many great websites offering information and webcams scanning the surface of the Loch, and many tours of Scotland can take you to this fascinating area to scan the surface of the loch yourself with the hope you will be the one to take that film footage or photo that would send excitement and news all around the world. You never know Nessie may appear but many a Scot will tell you Nessie is alive and well and doing just fine.