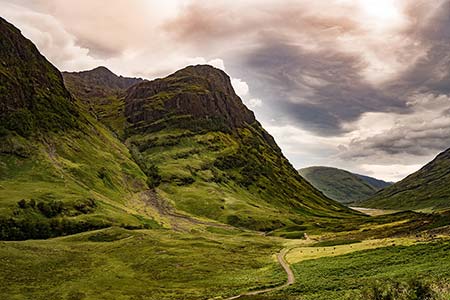 In earlier times the Highland region was dominated by the Gaels and their Gaelic language and culture while the lowlands were Scottish. The dividing line was everything west from the Great Glen (Inverness to Loch Linnhe and the islands) and roughly 50 miles of land east of the Great Glen. In a way this line still exists and there are still differences between Highland and Lowland culture and language although most Gaelic speakers are nowadays confined to the islands in the west with a Gaelic stronghold in the Outer Hebrides.

The Romantic and Mystical Highlands

The Highlands are often portrayed as a romantic part of Scotland. This is not at all strange given the stunning unspoilt nature with rugged mountains, deep blue lochs and empty glens where majestic Red Deer rule the hills and Eagles rule the skies. Due to the ever and fast changing weather the Highlands have a mystical touch. One moment you see the hills, the next they are gone. Sunny spells and dark shadows move over the hills and the white snow capped mountains in winter give the Highlands a sparkling touch. The Highlands, and its castles in particular, are often chosen as wedding venue due to their romantic nature.

The Dark side of the Highlands 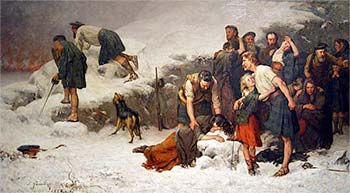 There are also darker sides to the history of the Highlands and one of them is the “Highlands of the clans” with their chieftains, the battles, the massacre’s and the bloodsheds, portrayed in history books and later turned into movies we all know such as William Wallace and Rob Roy McGregor. A good example is the massacre of Glen Coe in 1692 when the Scottish Captain Robert Campbell and his soldiers enjoyed the hospitality of the MacDonalds in Glen Coe. After orders received from the Secretary of State for Scotland, John Dalrymple of Stair, the soldiers turned against their hosts in the middle of the night, killing 37 men and more than 40 women and children and destroyed their homes.

Not long after the clan battles were over and the wars with the English were fought the Highlands became silent, and empty. Landowners found out they could make more money with sheep grazing on the hills and the population, mostly poor crofters with small patches of farmland, had to make way. These Highland Clearances as they were called, were sometimes performed with great force and resulted in mass evictions as well as mass emigrations. The people were sometimes literally driven towards the sea where they built small settlements and lived from fishing, the kelp industry and farming. Later big infrastructural works such as the Caledonian Canal provided some relief. These were hard times and many Highlanders tried their luck elsewhere and migrated to the US, Canada and Australia. Nowadays there are more descendants from the Highlanders living outside Scotland than there are inside. The results of the clearances are still visible today if you drive through the empty Glens in the Highlands and most people still live in villages and towns near the coast. The Highlands remain very scarcely populated.

This type of woodland, which consisted mostly of Scots pine, rowan, birch oak and Juniper, one covered huge areas in Scotland. Climatic changes caused the forest to retreat but fortunately there are quite a few remaining parts of the Caledonian Forest which are not only unique but also home to amazing wildlife such as the Capercaillie. Glen Affric is a good example of this ancient forest, so is Abernethy forest as well as the area south of Loch Maree, the Beinn Eighe Nature Reserve.

As written above, The Highlands are a region in Scotland but nowadays there is another way in which Scotland is organised and that is by councils. It took hundreds of years to transform the shires to counties and in 1975 the local government counties were abolished and were replaced by regions and districts and islands council areas. The regions and districts were themselves abolished in 1996, in favour of unitary Scottish council areas and one of these councils is Highland council, the largest in Scotland, and covers most of the land area in the Scottish Highlands. Highland council is based on the former counties of Caithness, Sutherland, Easter and Wester Ross, Inverness, Nairn, Badenoch and Strathspey, Isle of Skye and Lochaber. The total population of the Highland council is approx. 210,000 from which a third live in Inverness which is the council’s capitol.