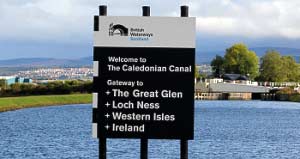 The Caledonian Canal is considered by some as one of the greatest waterways of the world, it certainly is a very beautiful one. Running from Inverness in the north-east to Fort William (Corpach) in the west, this 62 mile coast to coast channel passes through towns and villages, beautiful highland lochs, and stunning countryside. Only one third of the entire length is man-made, the rest being formed by Loch Dochfour, Loch Ness, Loch Oich, and Loch Lochy. These lochs are part of the Great Glen, a geological fault in the Earth’s crust. A total of 29 locks have to be crossed to reach the other end of the canal. Near Banavie are eight locks and they are also referred to as Neptune’s staircase. 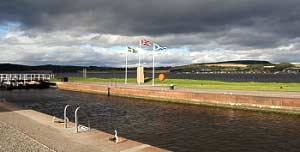 In former days before the Caledonian Channel was built, the wooden vessels had to round Cape Wrath and cross the hazardous Pentland Firth to sail from west to east or vice versa. Also in those days, we are speaking about the period just after the clearances, there was a lot of unemployment in the Highlands. That’s why a survey for a canal was carried out by James Watt in 1773. It was the Caledonian Canal Commission that paved the way for the actual construction.

With a budget of £474,000 and a schedule of 7 years engineers Thomas Telford and William Jessop started their survey, design and construction of the waterway in 1803. Construction of the Caledonian Canal started at both ends but due to various problems the canal finally opened in 1822, having taken an extra 12 years to complete, and cost £910,000. In the meantime, shipbuilding had advanced, with the introduction of steam-powered iron-hulled ships, many of which were now too big to use the canal. But due to the beautiful scenery the canal itself became more and more popular as a tourist attraction. Queen Victoria took a trip along it in 1873, and the publicity surrounding the trip resulted in a large increase in people visiting the region and wanting to travel on the canal. Even the arrival of the railways at Fort William, Fort Augustus and Inverness did little to harm the canal, as trains were scheduled to connect with steamboat services. 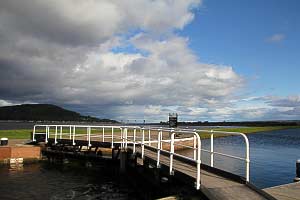 The canal is now a Scheduled Ancient Monument, and attracts over half a million visitors each year. British Waterways, who work with the Highland Council and the Scottish Forestry Commission through the Great Glen Ways Initiative, are hoping to increase this number to over 1 million by 2012. There are many ways for you to to enjoy the canal, whether it is taking part in the Great Glen Rally, cycling along the tow-paths, or cruising on Hotel Barges. If you are planning on making the journey yourself make sure that the maximum boat length is 45m and the maximum beam is 10.7m.

There are various places where you can easily visit the locks and see parts of the canal. Fort Augustus is a nice place to see the locks in action if you’re lucky. I personally like to visit the the Clachnaharry Sea Lock in Inverness [Google Maps], at the entrance of the Caledonian Canal. Here you have beautiful views over the Beauly Firth and Kessock Bridge and you can see the sailing yachts arrive at the lock from far out.

Places along the Caledonian Canal

Below is the route including the most important places and locks starting in Inverness. 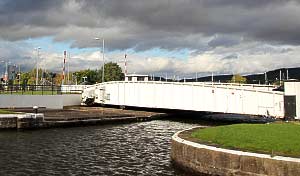