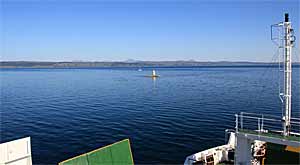 Arisaig it was time to move on, time to make plans to visit the Outer Hebrides. On day 10, a sunny Sunday morning, we left early for Mallaig for the ferry to Skye, the MV Coruisk to be precise. Since we had booked the ferry from Uig to the Western isles, we first headed for Portree for some sightseeing and shopping and from there we headed north over the Trotternish Peninsula to see the Old man of Storr. Just south of Staffin at Tobhta Uachdrach we stopped and enjoyed the breath-taking scenery. There was no wind, it was hot, the sea was dead calm and the basking sharks were feeding themselves on the krill and plankton. In the distance were the Isles of Rhona and Raasay and further away the beautiful mountain scenery of Wester Ross and the Applecross Peninsula. After spending some time there we headed for Staffin where we found a nice space at the Staffin Campsite, just before you enter the village of Staffin on the right. After a walk to the village where we met some of the locals we went back to the campsite to relax, cook our dinner and enjoy the calm evening, that is until the midges arrived, by the thousands, and fierce as hell. We were literally forced inside and had to close the windows because the midges came right through the motorhome’s mosquito nettings. It was really hot inside the motorhome but at least we weren’t bothered by the horrific creatures. The other day I spoke with someone who slept in a tent and he had hundreds of bites on his legs! 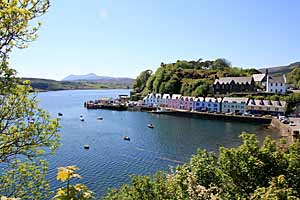 Day eleven, the mist is hanging low over the Trotternish Ridge while the sun is attempting to break through the clouds offering the misty views you’d expect on Skye, it’s stunningly beautiful and the midges of last night are long forgotten. We can’t stop taking pictures while driving to Uig on the other side of the Trotternish Peninsula which we reach after a few hours and bathing in sunshine, yes it’s hot again!

There’s quite a queue of motorhomes and caravans waiting already and with the prospect of not having booked a campsite we wonder where we will end up tonight. Halfway in the 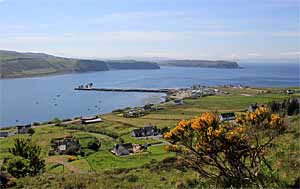 afternoon the MV Hebrides takes us across the Little Minch and when we arrive in South Harris the village of Tarbert is bathing in sunshine. We decided to visit the Tourist Information Office in Tarbert first for some information on campsites etc. We drove south-west towards Luskentyre in search of a campsite and when the white sands and blue water appeared in front of us we are stunned, this must be the most beautiful spot in Scotland. A mile further down the road we stop to take in the views, it’s awesome, just awesome, emotional too and I wipe away a tear of joy, it’s that beautiful. South of Luskentyre, near Horgabost, we found a great campsite just behind the beach and dunes where we admire another beautiful sunset later that evening. 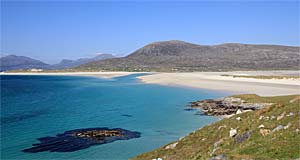 The next day, nr twelve, we left early for the Grand Tour of Lewis. Our first destination was Stornoway and again the skies were blue and the weather glorious. We parked our Motorhome at the Co-op supermarket where there’s always space for such a large vehicle (good tip!). We walked into the pretty town centre of Stornoway, enjoyed the fact that we fulfilled a long time wish. We had a coffee and a snack and before we did our shopping in the co-op we visited the Stornoway Fish Smokers, they have an excellent choice of smoked fish. Our next stop was the north-west of Lewis and the road that’s leading to the west takes us over some amazing landscape. When we reached the west we notice that the light is extremely beautiful here and it feels so much different from other parts of Scotland, as if we have reached the far north of Norway, it’s very special, breath-taking. 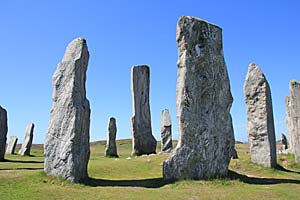 Next stop were the black houses of Gearrannan which were inhabited until the sixties. There’s a wee museum inside one of the houses and as I strolled around the village I walked into another black house when someone welcomed me in their holiday home, that I didn’t know! Next stop was the famous Callanish Stone Circle, the construction of which started around 2800 BC with an added tomb built later. The Callanish Standing Stones are a massive site and not to be missed when you visit Lewis. Since campsites are quite rare in the Outer Hebrides we decided to head back to South Harris, to Horgabost, for the night but not before we had dinner on a remote parking place next to Luskentyre Beach. What a great holiday so far. 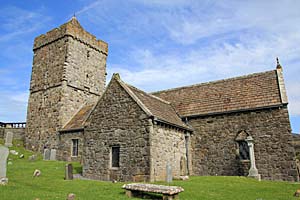 Another early start while the sky is blue, again, and the sun warms the interior of our motorhome. A promise of a beautiful day so we headed south to Leverburgh where we stopped for a coffee and an interesting blether with one of the locals. We talked about how the “English Invasion” has changed the lives of the Gaelic community. in some parts of these islands most houses are owned by people from England bringing with them a totally different culture and, as a nasty side effect, a dramatic increase of house prices which makes it impossible for the local youngsters to buy a house here. The result is that they move out, more English come in and in twenty or thirty years or so the Gaelic community is gone. I don’t think you can blame this on the English but I believe that a Scottish government should do more to make it less attractive for outsiders to buy a first or second home here, because this is driving up the prices. The woman we are talking to is also complaining about the incomers being members of all sorts of local committees raising their voice while the original community don’t let themselves be heard in such a way. I wonder where this is leading to but I really don’t want to think about it. 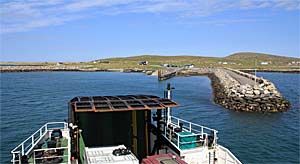 After our interesting blether we visited St. Clement’s church in Rodel, a fifteenth century church built for the Chiefs of the MacLeods of Harris and very much worth visiting. After our church visit we drive north over the Golden Road for a while, which is a remarkable road in an amazing landscape. Not much later it is time to go back to Leverburgh where another ferry, MV Loch Portain, was waiting for us, one that brought us to Berneray, well just actually, since the ferry port is next to the causeway to North Uist which is where we were going. First stop the tourist information centre in Lochmaddy to inform about campsites in North Uist. It seems there is hardly any choice so we’re advised to head south to a campsite called Moorcroft Holidays, a decent campsite. In the meanwhile we’ve tried to book a ferry back to Uig and it turns out that we have to stay in North Uist for three nights, all ferries are fully booked. Since the weather is still fabulous we are quite lucky although we would have enjoyed spending more time on Harris, I guess that’s the disadvantage of not booking all ferries in advance. So when we arrived at Moorcroft we immediately booked the campsite for three nights which was already difficult due to a lot of other bookings. I wonder how it’s like in the summertime when the “crowds” are coming to the Western Isles. 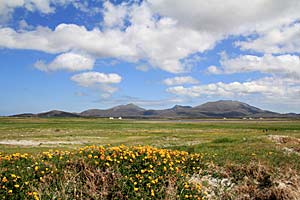 Day fourteen and we’re driving over the causeway to the Isle of South Uist, via Benbecula. Our first stop, after watching a barn owl flying low over the grass, was the Lady of the Isles, a white statue overlooking the western part of South Uist and Benbecula. For the first time in days there were clouds but the sun was already making progress to break through which was the case an hour later when we arrived at Flora MacDonald’s monument, just north of Lochboisdale. We decided to not go any further south but to visit the west coast of South Uist instead, we wanted to see the Machair and the beaches. We returned back north and near Kildonan we took a wee road on our left and tried to find access to the beach, which wasn’t easy. First we ended up at a graveyard directly near the beach (Rubh’ Aird-mhicheil) and from there we headed north again to find ourselves a stunning place near the sea wall, just metres away from the beach near Eilean Bheirean. The sun was out again, the sea blue, the waves rolled gently on the shore and the sand was white with the most beautiful pebbles I’ve ever seen. We had found our wee paradise! 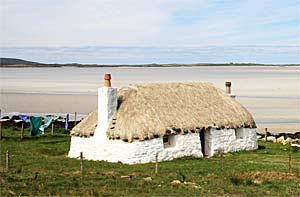 After our fabulous day on South Uist we were curious what North Uist had to offer us. There is one major road in North Uist and we travelled it clockwise starting with a visit to the Trinity Temple at Cairinis which has an interesting connection with Islay and the Lords of the Isles. The first wife of John, Lord of the Isles, is buried here. We continued west and stopped at the Hebridean Smokehouse where you can have a look in the viewing area which we found to be a bit disappointing, there are people working that’s all, but the smoked salmon we bought turned out to be excellent! Further west is the RSPB Balranald Nature Reserve, a paradise for bird watchers and nature lovers. We’ve spent some time there but never made it to walk the nature trail in between the crofts. The weather was on our side again and it was very clear so we could see the islands of St. Kilda far out to the west, a quite impressive view, same as the strange shapes of the Monach islands closer by.

Our goal for the afternoon was a visit to the beach at Malacleit and a walk to Veilish Point which turned out to be a perfect plan. At Veillish point you can walk up the dunes and look towards other beaches and the Isle of Oronsay. The colours of the sand and sea were amazing. When we turned back we decided to do a wee visit of Berneray, a most enjoyable and pretty wee island with lovely houses and some nice beaches.

Day 16 – Return from Lochmaddy to Mainland

Day sixteen and our last day in the Western Isles. We took things very easy and when we left the campsite we first went to Langais where we had a lovely walk and a visit to the Stone Circle. The weather was still on our side and so far we had seen nothing but sunshine and blue skies, amazing….. From there we went to Lochmaddy where we had lunch in the motorhome, a relaxing walk through Lochmaddy and we waited for the ferry back to the mainland which arrived an hour late due to strong winds. The crossing wasn’t easy but we arrived back on Skye early in the evening and we camped that evening in Shieldaig in Wester Ross, not a real campsite but excellent for our needs. The Western Isles were everything we wished for and much more, also due to the never ending blue skies and warm sunshine. Yes. we’ve counted our blessings, each and every day! This week was the best we’ve ever had in Scotland. I know we will come back here but it will never be the same again. Continue to Wester Ross & North West Highlands to Durness

Sunset over Taransay from Horgabost Beach 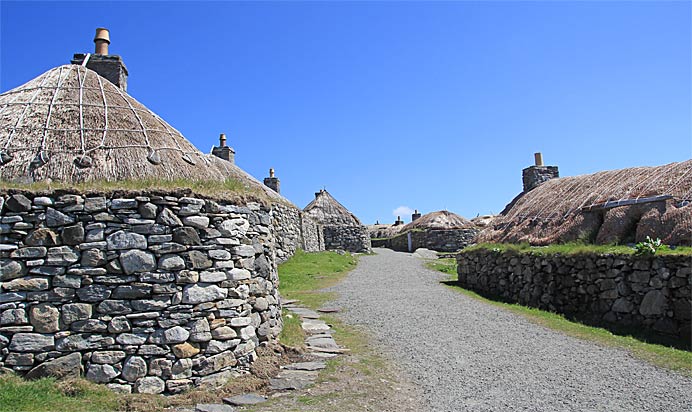 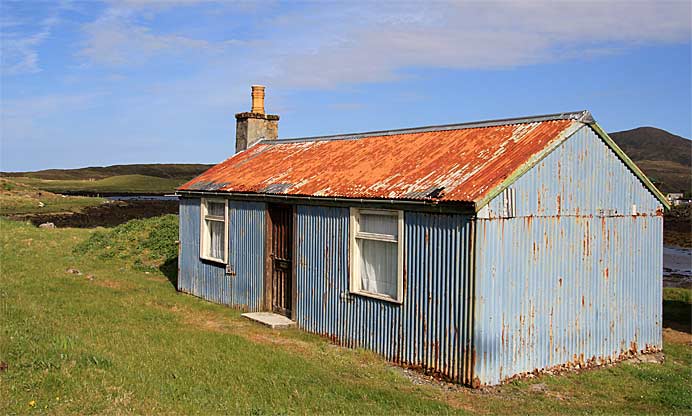 Tin cottage on the Isle of Harris 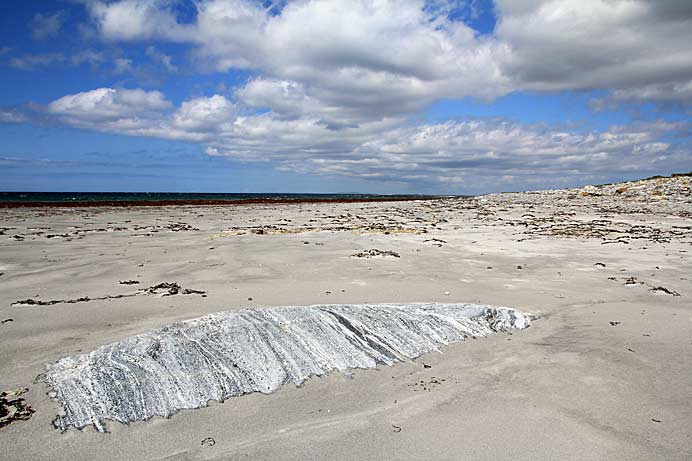 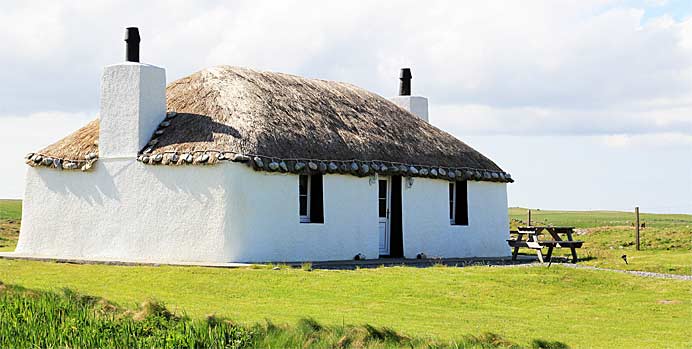