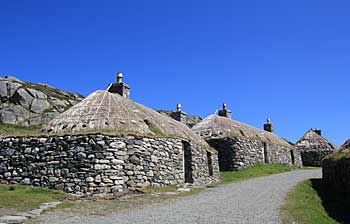 On the outer edge of Europe, in the far north west of Scotland, are the Western Isles or Outer Hebrides, they form their own council area. This chain of islands form an area of unspoilt natural beauty with spectacular scenery, impressive mountain ranges, moorland, lochs, machair and miles of golden (sometimes sheltered) sandy beaches and turquoise seas. The Outer Hebrides have a unique Gaelic culture and many traditions while religion plays a very important role in daily life. The Scottish Gaelic language is still dominant in many communities in the Outer Hebrides.

Some Facts and Figures

Stornoway on the Isle of Lewis is the administrative capital of the Western Isles. Water is a major feature of the Western Isles with over 6.000 lochs spread over their comparatively small terrain. Though they comprise only 1,3 % of the UK’s landmass, the Outer Hebrides contain 15% of its freshwater surface area. From the Butt of Lewis all the way down to Barra/Vatersay is approx. 240 Kilometres. The highest mountain, 799 metres, is the Clisham on the Isle of Harris.

Most islands on the Outer Hebrides are host to large numbers of wildlife due to the huge variety in (protected) habitats and vast areas of unspoilt nature. Golden Eagles, Otters, Corncrakes and a huge variety of waders inhabit the islands and attract many visitors.

The Far North-west Isle of Lewis 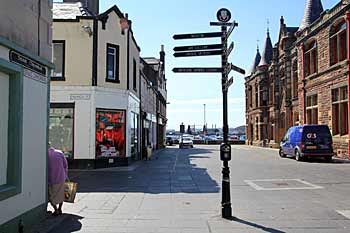 Unpopulated Islands in the Outer Hebrides

Map of the Outer Hebrides

Lewis is the most northerly island of the hebrides and the largest island of the Outer Hebrides. Lewis has a history that goes back thousands of years and ancient stone circles and standing stones can be found everywhere. On the west coast of the Isle of Lewis, at Callanish, stands the awesome collection of stone circles and rows of standing stones called the ‘Hebrides’ Stonehenge’. More to the west is the Blackhouse Village of Gearrannan with a museum and cafeteria. Some of Lewis’ highlights are Garry Beach near Tolsta, Ness with the Butt of Lewis and harbour surrounded by fantastic cliffs and a very huge standing stone at Clach An Truiseil near Brù. Most villages can be found near the coasts and in particular on the east coast around Stornoway. The interior of Lewis consists mostly of moorland and was, and still is, an excellent source of peat which is used as fuel. The southern part of Lewis has more mountains. Gaelic is the main language in the Western Isles together with English. The Western Isles culture remains very strong, and the Sunday is still strictly lived by the Free Church traditional values. 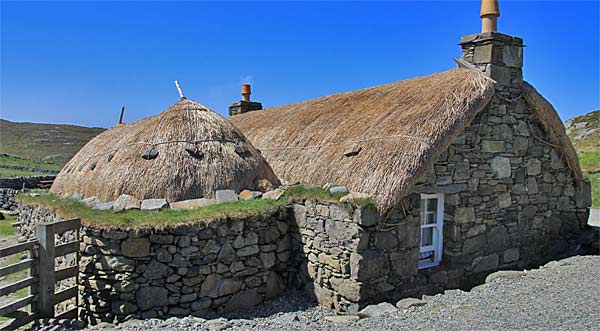 Luskentyre Beach on the Isle of Harris

Sunrise over the Isle of Taransay from Harris

Harris is bordered in the north by Lewis and also called North Harris, while south Harris is almost a separate island with the town of Tarbert as the centre. North Harris has the highest mountain in the Outer Hebrides, the Clisham at 799 metres. the north of Harris is hardly populated. A bridge links the Isle of Scalpay to Harris. The southern part of Harris is less mountainous, with numerous unspoilt, white sandy beaches which are mainly on the west coast. Luskentyre and Scarista beaches are considered, by many and myself, to be the most spectacular. This area has some of the most breathtaking scenery in the Western Isles and in fact in the whole of Scotland.

Causeway between North Uist and Berneray on the other side. Note the “Otter Crossing Sign

Berneray is an island in the Sound of Harris, close to North Uist in the south and Harris in the north east. With an area of a little over 10 square kilometres, Berneray rises to a height of 93m at Beinn Shleibhe (Moor Hill) and 85m at Borve Hill. Most of the people on Berneray live on the east coast near Bays Loch where there is a harbour. The west coast is mainly white sandy beach and dunes. Berneray currently has a population of around 130 people. Berneray is linked to North Uist through a 900m long causeway which was opened first in 1998, and linked with Harris through a regular ferry service. Berneray is often confused with Great Bernera, also known as Bernera, which is an island in the Outer Hebrides off the west coast of Lewis. Bernera is linked to the west coast of Lewis by a road bridge. 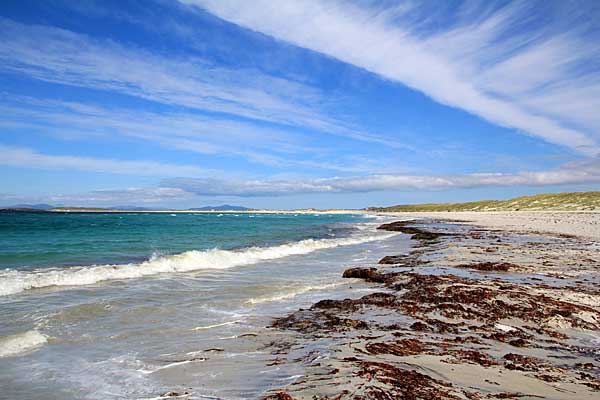 North Uist is relatively flat compared with Harris except for the south east, and most of North Uist is covered with relatively low hills, many lochs and peat bogs. More than half of the island is covered by water. The mixture of fresh and salt water lochs creates interesting and sometimes unusual habitats. Lochmaddy is the main settlement on the island and it’s from here that the ferries leave for Uig on Skye. Lochmaddy has a shop, petrol station, tourist information office, an arts centre and other amenities. North Uist is also known for its interesting and diverse birdlife and the Corncrake is one the rare species here. North Uist has many prehistoric structures, including a chambered cairn, the Pobull Fhinn stone circle and the Fir Bhreige standing stones. North Uist is also a paradise for birdwatchers and the island is home to an RSPB reserve at Balranald.

Looking over Benbecula from South Uist

Benbecula is a rather flat island in between the two Uists and is connected by causeways. Benbecula has no ferry service but Benbecula Airport has daily flights to Stornoway, Glasgow, Inverness and Barra. Benbecula’s main village is Balivanich in the northwest, it houses a military base and its personnel. Other villages include Craigstrome, which lies on the eastern half of Benbecula. The eastern part of Benbecula is quite flat, has some nice lochs and a nature reserve rich with birdlife. The only hill is 124 metres high. 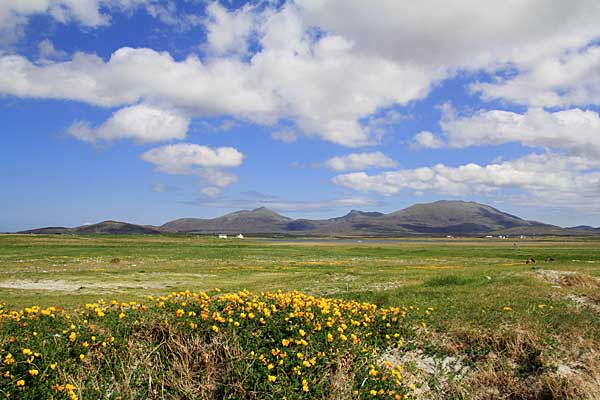 The west of South Uist consists of a continuous and most of the times deserted sandy beach backed with beautiful patches of Machair. The east coast, in contrast, is mountainous with the peaks of Beinn Mhor 620m and Hecla 606m. Interesting sites on South Uist include the Kildonan Museum, housing the sixteenth century Clanranald Stone, and the ruins of the house where Flora MacDonald was born. The island is also home to the Askernish Golf Course, the oldest on the Outer Hebrides. The main village on the island is Lochboisdale, from which ferries sail to Oban on the mainland and to Castlebay on Barra. The island is also linked to Eriskay and Benbecula by causeways.

Eriskay is located just south of South Uist and connected with that island through a causeway which was opened in 2001. This was a good reason to make Ceann a’Gharaidh on Eriskay the ferry terminal to and from Ardmore on Barra, located to the south of Eriskay. Eriskay is famous for the Eriskay Ponies, picture on the right, and of course Eriskay is the real ‘Whisky Galore’ island. It was just off Eriskay, between Great Todday and little Todday, that the S.S. Politician ran aground in 1941 with 50,000 cases of whisky aboard. The locals managed to save several hundreds of cases before the ship sunk into the sea, providing them with a good supply of their ‘Water of Life’.

Barra, which is one of the most southerly island of the Outer Hebrides, is and island with stunning scenery and beautiful beaches on the west part of the island. Barra is very suitable to be discovered by bike or by foot. Castlebay is Barra’s largest village and has an interesting castle, one of few by the way in the Western Isles. Kisimul Castle is owned by Historic Scotland and still occupied by a MacNeil Chief – Roderick, son of Robert Lister MacNeil – who pays an annual rent of 1 Pound and a bottle of whisky. Barra also has a ruined church, a museum at Cille Bharra and a number of Iron Age brochs and other structures.

How to get to the Outer Hebrides

Airports on the Outer Hebrides

Barra: The Island of Barra is located near the southern tip of the Western Isles. The Airport lies on the north east coast of the island. Washed by the tide twice a day it is the only beach airport in the world to handle scheduled airline services.

Benbecula: Benbecula lies between North Uist and South Uist in the Western Isles. The airport is located on the west coast of the island.

Stornoway: Stornoway Airport provides a key access point to Lewis and the Western Isles, with flights from Aberdeen, Inverness, Edinburgh and Glasgow, and inter-island services to Benbecula and Barra.

Ferry services to the Outer Hebrides

Local Ferries on the Outer Hebrides