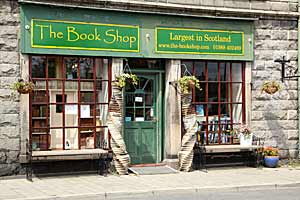 As we crossed the Scottish Border near Gretna Green excitement kicks in. Finally we’re on our way after waiting for so long. Already a year ago we decided to do this once of a lifetime trip and now we find ourselves in a lovely and rather luxurious motorhome in Dumfries and Galloway. Our home for the next 24 days is a Hymer Tramp 694 with a lot of facilities on board such as a separate shower, a bathroom with chemical toilet, a well equipped kitchen, a nice sitting area, good beds, stereo, TV etc. We haven’t booked any campsites, we were basically blank on how things worked in Scotland so it was a bit of an adventure as well since we hadn’t figured out a lot in advance. I had read in forums about wild camping and looked at a few campsites along our route but nothing was booked. We thought that it would be quiet on the campsites because the main tourist season hadn’t started yet which turned out to be partly true. 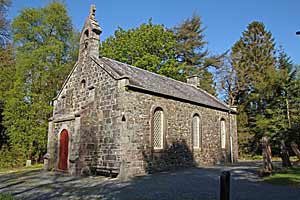 Late in the afternoon of our first day we arrive on our very first campsite, Seaward Campsite south of Kirkcudbright. It turned out there was plenty of space, we almost had the site to ourselves, lovely. There was a nice playground for our daughter and I was busy “hooking up” power and getting everything ready for our first night in the motorhome. A few hours later it started to rain while we were making dinner and with the lights on it all looked very cosy and comfy. It was quite a procedure to get everything sorted for the first time and making dinner was like building a house on a shaking chess board due to the limited space and lack of experience but my wife managed wonderfully well. After a good night sleep we woke up with some sunshine and used the shower facilities of the campsite before having breakfast. After that it was time to unhook the power, fill the tank with freshwater and get rid of the grey water which didn’t prove to be very easy. Most campsites have a grey water disposal point but they are not always in the most logical place and as a first timer I didn’t really know what to look for but with some help from the usual friendly staff I managed to overcome this. Time for the next day of our adventure! 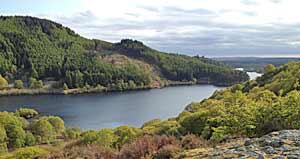 The second day and we are on our way through a beautiful landscape on a curved and climbing road when suddenly we hear a loud bang! The door from the fridge opened up by itself and we found out we didn’t close it properly before we left…. Aiii that nearly spoiled our trip, without a fridge door we would have had a serious problem. There are so many things to check before you leave!! Are the Doors closed? And the windows? Is the electric power unhooked? Are the dishes and cups removed from the kitchen workspace? Do we have enough water? Have we dumped the grey water? What’s the status of the chemical toilet? Etc. Etc. It was all part of getting used to driving around in a motorhome but we learned, eventually…

An hour or so later and a still recovering from a near heart attack due to the fridge door we end up in lovely Wigtown, book capital of Scotland, where we stroll over the market, visit some bookshops and have a light lunch. If you’re looking for a particular book you’ll find it here. Apparently Wigtown wasn’t a book town all it’s life, it has been created some years ago to boost the economy. Well done I should say. From Wigtown we head north via Newton Stuart to the Galloway Forest Park. We stop early in the afternoon at the Glen Trool Holiday Park. By now the sun was out and the weather was glorious. Our daughter had a good time on the grassy field and I decided it was time for some exercise, a bike ride to the Bruce Stone near Loch Trool, a stunning ride on a single track road, awarded with beautiful views of the Glen and the hills at the end of a good climb. 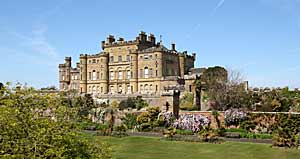 Day three, a glorious Sunday morning, and we were heading north over the A714 towards the Ayrshire coast but not before I had a relaxing walk in the area, which happens to be where the Southern Upland way passes. We had Culzean Castle on the menu but first we had to deal with the A714, the landscape is beautiful but the quality of the road is terrible. Driving in a motorhome can sometimes be compared with moving a shopping trolley over a cobblestone road and when the quality of the road is bad you sometimes long for your car. But we shouldn’t complain, towards Girvan the views of the Ayrshire coast and the Isle of Ailsa Craig were breath-taking and you soon forget the rattle of pots, pans, cups and cutlery. In Girvan we took the A77 north, a fine quality tarmac, and we soon arrived at what proved to be one of the finest castles in Scotland, Culzean Castle and Country Park. 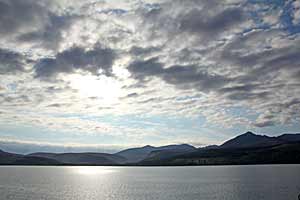 After spending a few hours in the castle and the gardens we headed north to Gourock where we wanted to take the ferry to Dunoon but…. Due to an accident on the A78 just after West Kilbright the road was closed and there was a lengthy detour in place. We decided to skip Gourock and try or luck in Ardrossan for the Arran ferry. We were lucky, the ferry had yet to arrive and late in the afternoon we sailed towards the Isle of Arran on the MV Caledonian Isles where we arrived around 7pm. After a short drive from Brodick to Lochranza we found ourselves on the Lochranza Caravan and Camping Site, not the best campsite we’ve been to in Scotland, the facilities were rather basic, but the beautiful location and the deer in the fields nearby made up for that.

Day four and not a clue where we will end up today. We left from Lochranza late in the morning on the Claonaig Ferry and headed to Tarbert. At Kennacraig we saw the new Finlaggan Ferry waiting for her journey to Islay. From Tarbert we headed north over the A83 and took the A817 to Oban through Kilmartin Glen. At Kilmartin we enjoyed a long break and wonderful lunch at the museum. Afterwards a walk to visit the monuments and from there we travelled to Oban. The weather was amazing and the campsite where we ended up was just perfect, located a few miles south of Oban, with views to the Isle of Kerrera. In the afternoon we went for a wee walk and also due to the beautiful weather it felt like we had arrived in paradise so we decided to stay for two nights.

The extra day in Oban was great, we had a wonderful time at the campsite and a lovely visit to Oban where we’ve visited McCaig’s Tower, built by the wealthy philanthropic banker John Stuart McCaig, those were the days! The views from the tower are great, the ride up with the bike proved to be rather difficult, the rest in the afternoon with a cold beer on the campsite was a treat!

It’s day six and since we have good friends in Lochaline on the Morvern Peninsula we decided to head to the Isle of Mull. We took the ferry from Oban to Craignure on a hot morning after enjoying a nice coffee on the pier while watching the world go by. The MV Isle of Mull left around 11 and offered us beautiful views of Oban and the surrounding islands before arriving in Craignure. From Craignure we headed a few miles south where we visited the beautiful Torosay Castle Gardens. The castle itself was closed but the gardens alone are worth a visit and so was the playground for our daughter. While walking in the gardens of Torosay Castle you can see Duart Castle in the distance and that’s where we headed afterwards.

Duart is a very impressive castle, no gardens though, but famous from the movie Entrapment starring Sean Connery (who has MacLean ancestry on his mother’s side) and Catherine Zeta-Jones. Later in the afternoon we took the ferry from Fishnish to Lochaline and spent the evening with our friends. 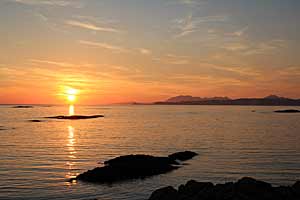 Day seven already and again a glorious day, we were extremely lucky with the weather. We toured over beautiful roads towards Arisaig via Strontian, Salen, Ardnamurchan and the Moidart peninsula. It turned out to be a stunningly beautiful drive. There was a planned road closure on the A861 from 11am to 2pm, we managed to avoid the road closure in the nick of time because we arrived one minute before the road closed, pfew…. In Arisaig we searched for a campsite and ended up in a wee gem, the Invercaimbe Caravan Site.

We had a pitch a few metres from the beach, the weather was hot and sunny and it felt like we had arrived in paradise, again! We thought it wouldn’t get better than this so we stayed here for three nights and had the time of our lives. We enjoyed the most beautiful sunsets in Scotland, we played in the sea, searched for sea shells, visited the villages of Arisaig, Morar and Mallaig, saw and heard the Jacobite arriving, visited the Glenfinnan monument and viaduct, enjoyed the breath-taking views over Loch Shiel and saw even more stunning sunsets. We had the best of weather and the best of times we ever had in Scotland, it felt like we were on a tropical island! Next on our list were Skye and Outer Hebrides…. 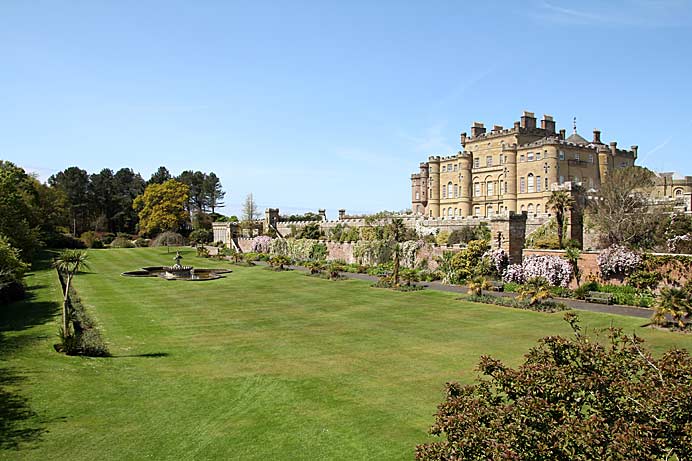 Garden in Front of Culzean Castle 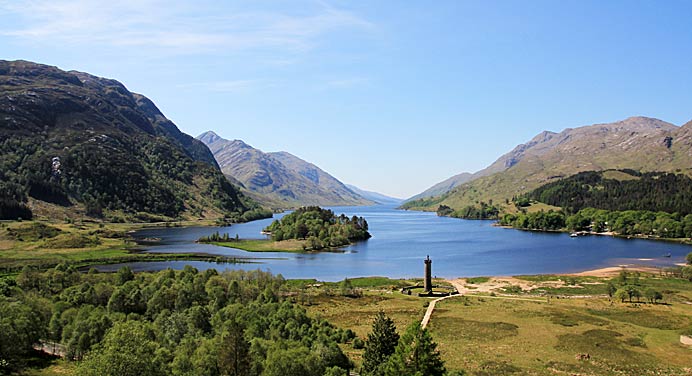 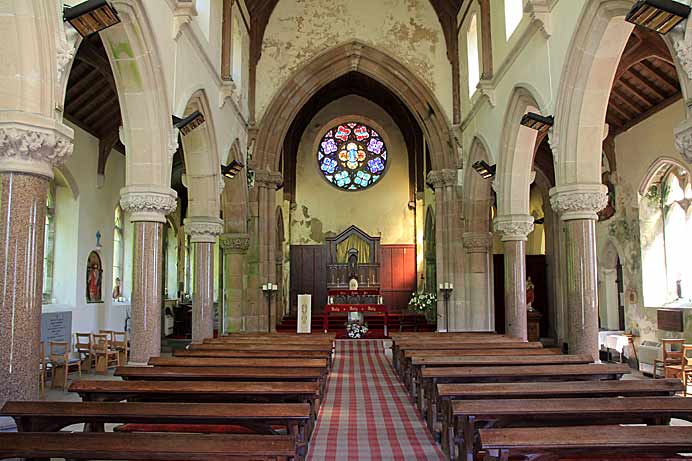 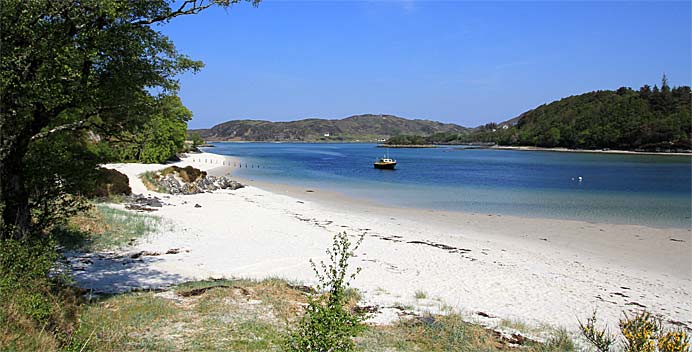 The Silver Sands of Morar

Arrival of The Jacobite in Mallaig