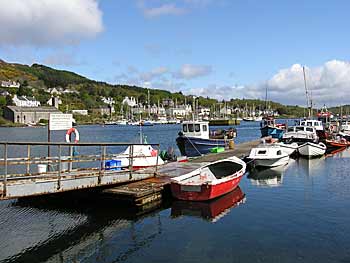 Argyll and Bute is a council area in the south west of Scotland and stretches from the Mull of Kintyre in the south, Oban and the Isle of Lismore in the north and borders in the east on Loch Lomond and the Trossachs National Park. It includes the islands of Bute and most islands from the Inner Southern Hebrides such as Islay, Jura, Colonsay, Mull and a lot of smaller islands such as the Slate Islands. Arran however belongs to Ayrshire. The county town was historically Inveraray, which is still the seat of the Duke of Argyll. Lochgilphead later claimed to be the county town, as the seat of local government for the county from the nineteenth century.

Argyll’s roads may not be the best in Scotland but the dramatic views, lovely villages, ancient castles and beautiful nature compensate that fact more than enough. The A82 and A83 roads are among the most scenic roads in Scotland and takes you to places such as Loch Lomond and the Rest and be Thankful mountain pass. The A83 passes the historic village of Inveraray while further south the Kintyre peninsula is the gateway to the southern islands of the Inner Hebrides.

To the west lies Oban, the biggest town in Argyll and gateway to the Outer Hebrides and the Isle of Mull. In between is a network with hundreds of miles of b-roads with just as many places to discover. There is always something new around every corner and almost everywhere is the sea, or a sea-loch within reach.

Kilmartin Glen, north of Lochgilphead, has one of the most important concentrations of Neolithic and Bronze Age remains in Scotland. There are more than 350 ancient monuments within a six mile radius of the village, with 150 of them being prehistoric. Monuments include 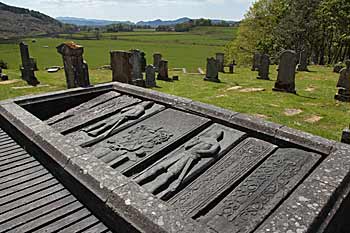 standing stones, a henge monument, numerous cists, and a “linear cemetery” comprising five burial cairns. Several of these, as well as many natural rocks, are decorated with cup and ring marks. The remains of the fortress of the Scots at Dunadd, a royal centre of Dal Riata, are located to the south of the glen, on the edge of the Moine Mhor or Great Moss. The Kilmartin House Museum of Ancient Culture is located within the village itself, and aims to interpret the rich history of the glen.

The most important town of Argyll is Oban which has an interesting town centre with lots of shops. Oban port is the gateway to the Hebrides with the important Calmac ferry terminal. From here ferries leave for Mull, Coll, Tiree and the Outer Hebrides. That and the fact that Oban is the only large settlement in the area makes the town one of the busiest places in this part of Scotland. Remarkable is the location of the distillery in the town centre. It was there before the city expanded in the 1900’s to its present size.

The Town of Oban seen from the Ferry

Argyll has a very high nature value, there are nine nature reserves which offer spectacular wildlife for even the most spoilt visitor. What to think of the 50,000 geese that migrate to Islay each autumn from the Arctic. And there are the ancient deciduous woods of Taynish whose ferns and mosses support over 300 species of plants, 20 kinds of butterflies and a rich marine life on the loch shores, or the puffins on Staffa and the Eagles on Mull, Jura and Islay. On the Isle of Jura alone are 6,000 deer outnumbering the 200 inhabitants. It is said that Argyll has more miles of coastline than the whole of France and there is wildlife to be found everywhere and seals are just as common in some places as gulls.

Loch Fyne is a sea loch on the west coast and extends 65 kilometres inland from the Sound of Bute, making it the longest of the sea lochs. It is connected to the Sound of Jura by the Crinan Canal. Loch Fyne is notable for its oyster fishery, and as a consequence the loch has given its name to the locally owned Loch Fyne Oysters, and the associated Loch Fyne Restaurants from which one can be found at the north side of Loch Fyne and a stop here is highly recommended. Other well known lochs worth visiting are Loch Awe with the beautiful Kilchurn Castle on the north side and Loch Etive which ends in the stunningly beautiful are very remote Glen Etive, only accessible from Glen Coe.

The waters around Argyll – the Sound of Jura

Inveraray is beautifully situated halfway Loch Fyne and is without a doubt one of the most beautiful historical towns in Scotland. Famous tourist attractions are Inveraray Jail with an 18th century court and prison, a lovely historical town centre with a fantastic hotel called The George, and Loch Fyne whiskies, one of the best whisky shops in Scotland. A visit to Inveraray is not complete if you haven’t visited the Duke of Argyll’s castle, just outside the town centre.

The Kintyre peninsula starts at Tarbert, a picturesque fishing port with many beautifully coloured houses situated around a perfect natural bay. A few miles from Tarbert are the ferry terminals of Kennacraig and Tayinloan offering ferry services to the islands of Islay and Gigha. Over the hills on the east side of the peninsula is the ferry terminal for the Isle of Arra. The largest town in Kintyre is Campbeltown, one of the whisky regions in Scotland, and former home to around thirty whisky distilleries. To the south-west is the famous Mull of Kintyre. Only fifteen miles separate Scotland from Ireland.