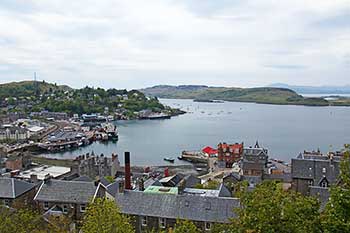 The jewel in the starry crown of Argyll and Bute is the picturesque town of Oban, sitting on the dark blue waters of the Firth of Lorn overlooking the Islands of Mull, Kerrera and Lismore. The name derives from the Gaelic language: An t-Òban, which means the Little Bay; (correctly: An t-Òban Latharnach the ‘Little Bay of Lorne’), and the harbour is a perfectly sheltered horseshoe inlet. Today, the port is the key mainland ferry terminal for crossings to Mull and several of the Outer Hebrides as well as the Inner Hebrides; as such, it is often called the ‘Gateway to the Hebrides’. Yet, Oban’s development came late as a harbour; and not really until the late 19th century and into the 20th and the coming of the railway was it fully utilised. 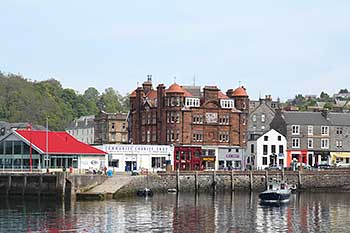 Today, the main commercial centre of Oban is based along the sea-front from the many hotels and guest houses of the Esplanade to the shops, restaurants and bars of the town centre. The residential areas occupy the slopes and terraces leading back from the main streets. Many of these terraces are raised beaches and extinct cliffs formed at the end of the last ice-age, and consequently the streets are pretty steep; which is a consideration if you happen to book into a bed and breakfast above the town. The town’s population is around 8,500 making it one of the largest in the Highlands, but at the height of the tourist season over 25,000 can be visiting on a given day making it a busy place. Travelling to Oban takes you through the sparsely populated and mountainous landscapes of Breadalbane and Argyll, so Oban’s bustling streets can come as a bit of a surprise to the visitor.

Oban Distillery
Most of the buildings are 19th century, save a couple of old inns and the distillery built by John and Hugh Stevenson in 1794. One of the oldest distilleries in Scotland, and certainly older than the town, Oban produces a stunning malt whisky that falls between the smokier drams of the islands and the sweeter nuances of the Highlands. Part of the Diageo range, there is a visitor centre and regular tours around the plant. Any visit to Oban aught to include a visit. To compliment its fine whisky, Oban is also famed as a great seafood town, which comes as no surprise; but one of the great experiences is to take the free boat over the Kerrera and have a meal at the Waypoint Bar and Grill – affording fantastic views over the Bay as you enjoy the fare. There are plenty good restaurants and bar-restaurants in the town as well, with a wide range of food – but, as a busy place it is good idea to get in early. 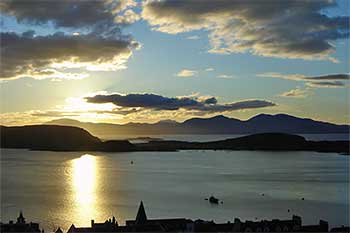 There’s something about the place that makes you want to go for an evening walk; maybe it’s the sea air, or the choice of places to stroll to: such as Dunollie castle at the far end of the esplanade, Pulpit Hill above the ferry terminal or if you’re feeling particularly fit, McCaig’s Folly which overlooks the town. The Wealthy banker, John McCaig wanted a lasting reminder and to provide local stonemasons with work over the winter months, and so from 1897 to his death in 1902 a Romanesque tower was built on one of Oban’s higher terraces. The views from the folly are breathtaking, overlooking the bay, Lismore and Mull. With his death the project effectively came to an end and only the outer walls were actually built; but it remains a prominent local landmark, and worth the hike to see (you can drive if the legs aren’t quite up to it).

As well as offering plenty for the visitor, Oban also makes a great base for touring the West Highlands. To the south you can make a day of it by visiting the Clachan Bridge over to the Isle of Seil (a stone bridge built in the 1790s and the first to cross the Atlantic Ocean) and even pay a visit to the island of Easdale, where no cars are allowed. Further south is Kilmartin Glen, and a staggering array of Neolithic stone circles and burial chambers. Also here is Dunadd Hill: an Iron Age fort where ancient Scottish kings were crowned over 1500 years ago. The Kilmartin Inn makes a good lunch stop, and the village has a great museum and medieval grave slabs can be seen in the churchyard.

Dunstaffnage Castle
Heading north is Dunstaffnage Castle, originally built in the 13th century by the MacDougal Clan, but since 1470 has been in the possession of the Campbells, the area’s most powerful family. Today, it’s partially ruined but remains once of the best windows on our clan history. Not far from the castle are the Falls of Lora, a spectacular force of nature. Loch Etive is an Atlantic fjord that has a slightly different tidal regime from the open ocean, which means at certain times the waters either rush in or out of the loch at breakneck speed. There is a rock-bar at the entrance to the fjord, and this creates a huge set of salt-water rapids. 40 minutes further north will take you to the dramatic landscapes of Glencoe and the road to Inverness.

One of the great journeys from Oban is over the sea to Mull and Iona. There is a regular ferry service to Craignure on Mull, which takes about 50 minutes and passes the impressive Duart Castle, seat of the MacLeans (which is open to the public). Mull itself is worth exploring, and if you want to spend time, I’d advise spending a couple of nights in Tobermory the main town on the island. If you’re only over for the day, then you should drive the single track road down to Fionnphort (about one hour) and take the ferry to Iona (Ì Chaluim Chille). It was here that St Columba founded a monastery in 563AD, and the current Abbey sits on the site. The standing stones, stone crosses and the ‘Road of the Dead’ (along the route of which over 50 kings are buried) take you back through the centuries to a time when this remote island sat on a cultural crossroads. Away from the historical, Iona has some great walking, and the beaches off the west are unsurpassed for beauty and relaxation.

For the more adventurous you can take a boat from Iona to the uninhabited, but enthralling Isle of Staffa. Here volcanic columns of basalt usher you into the huge maw of Fingal’s Cave(which so inspired Mendelssohn); and the trips give you time to enjoy the island’s peacefulness (and get up close and person with the Puffins).

Oban is one of Scotland’s gems, a fun town with plenty to see and a great base to explore some of the most important prehistoric, historic and scenic locations in Western Europe; and whether by rail, road or boat it should be on any itinerary.