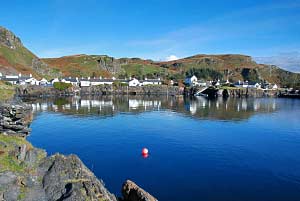 It was on the 16th of October 2010 when we drove down from Wester Ross to the Isle of Islay and passed Oban on a marvelous day. The weather was stunningly beautiful, the skies blue and the wind, usually quite present on the Scottish West coast, decided to take it easy as well. The leg from Oban to Lochgilphead over the A816 is one of the most beautiful in Scotland, especially with all the history so visible in Kilmartin Glen and because the weather was in our favor we decided to go for a wee detour. A few miles south of Oban we turned right on the B844 to cross the Atlantic Bridge. It sounds a bit like the Skye Bridge but be warned, this is just a wee bridge over a wee bit of water but…. This water is the Seil Sound and is in direct connection with the Atlantic Ocean, hence the Isle of Seil is and island in the first place and that is also why you are actually crossing the Atlantic Ocean via a bridge. 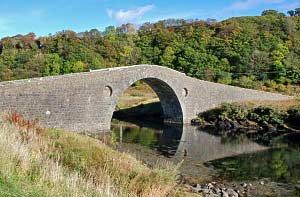 After you’ve crossed the Atlantic Bridge you find yourself on one of the Slate Islands. This island also belongs to the Southern Hebridean Isles which are also referred to as the Islands of Argyll. After a few miles near Balvicar there’s a junction, left takes you to the Isle of Luing via a wee ferry which crosses the 200 mtr of the Cuan Sound, right is the direction for the main settlement on this beautiful island, Ellenabeich. Capital is a big word for such a small island but the fact is that most people and amenities can be found here. Before you arrive in Ellenabeich make sure to keep an eye out over the sea to take in the views of the neighboring Isle of Easdale, the smallest permanently inhabited island of the Inner Hebrides. Easdale is car(e) free and it can be reached via a wee ferry from Ellenabeich Harbour. The Isle of Mull with its impressive cliffs provides the backdrop for this curiously shaped island.

Speaking about the shape of Easdale and the deep water holes in Seil for that matter…. Extensive slate quarrying have left their marks in the landscape of these islands as well as the other islands that belong to the Slate Islands group. During the peak of the slate quarrying period hundreds of people worked on these islands to quarry slate which was used to roof the homes of people in Scotland, Ireland and beyond. Slate quarrying was not without risk if you read the following quote from the Southern Hebrides website: “The fourth Earl of Breadalbane, who was the landowner at the time, built picturesque villages for the workers. The main quarry on the south side went deeper and deeper into the ground as the men chiseled out the slate. Gunpowder was then used for blasting and by 1880 the pit was 75m deep, nearly 250 feet below sea-level, with only narrow walls of slate keeping the sea out. In November 1881 the inevitable happened. There was a violent storm and the sea broke through. Luckily it was night and the pit was unmanned but 240 families lost their only means of support and severe poverty ensued. The place where this happened is still clearly visible.” 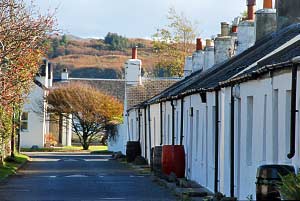 When we reached our destination, the village of Ellenabeich, we were very pleasantly surprised. The village is home to the Slate Islands Trust Heritage Centre in a former slate quarrier’s cottage and has displays illustrating quarry working’s and many aspects of 19th century life in the area. There are also a few restaurants and there is plenty accommodation if you decide to stay a bit longer, which we normally should have done if we hadn’t booked something else already. The village of Ellenabeich turned out to be a wee bit of tranquil heaven on this sunny afternoon. It felt like an almost lazy Mediterranean atmosphere looking at the white washed cottages which were bathing in the Autumn sunshine while the sun itself created beautiful reflections in the Firth of Lorn, a special area of conservation. The view of a sailing boat passing by added to the wonderful atmosphere. As we sat on a bench near the putting green watching the world go by we decided that this was one of the nicest surprises we experienced in Scotland so far. We will be back soon!

Easdale Seen from the Isle of Seil 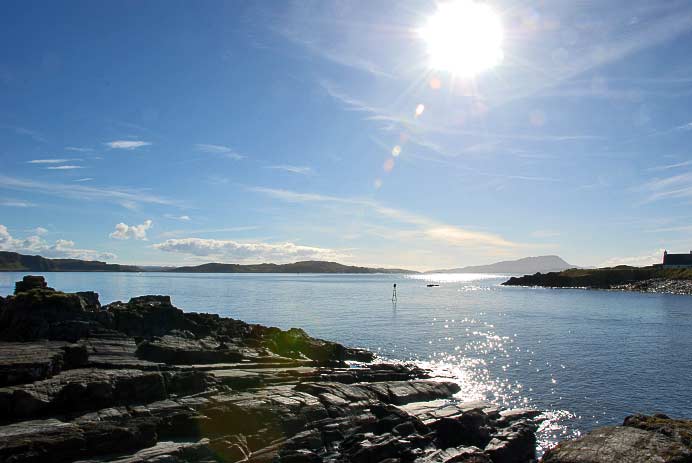 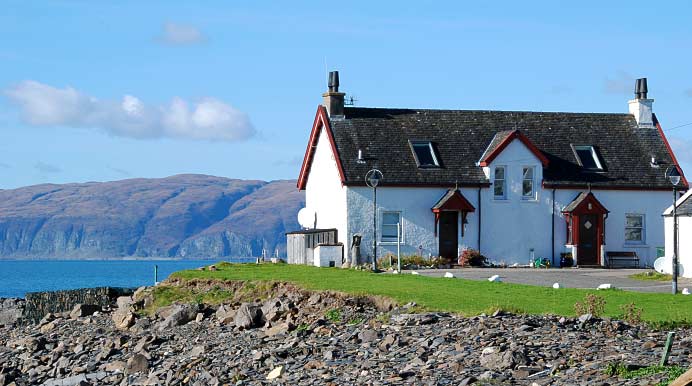 White Washed Cottage in Ellenabeich near Firth of Lorn