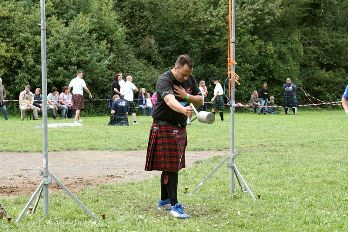 As sport continues to become ever more modernised with the latest technology in sports footwear and equipment, it is always nice to see certain cultures continuing to compete in truly traditional events. The Scottish are just one culture still participating in traditional athletic competitions such as Tossing the Caber and Putting the Stone.

Each year, the Scots combine these historical sporting events into one mass competition – The Highland Games – which take place all across Scotland throughout the year. With so much history behind all of the events that are included in the ‘Games, here is a fleeting guide to just a couple of the oldest sports that hail from the Highlands.

Also known as the Caber Toss, Tossing the Caber is one of Scotland’s oldest athletic events. During the competition, competitors (a.k.a. ‘tossers’ or ‘throwers’) are required to toss a large wooden pole (known as a caber) taken from a Larch tree. Each pole typically measures 19 feet 6 inches (5.94m) in height, and weighs around 175 pounds (79kg).

In order to score, the throwers are not only required to throw the pole a significant distance away from the starting line, but to also complete a “perfect” throw where the top end of the pole lands nearest to them, whilst the bottom end lands directly away. However, where the pole land in the opposite manner (i.e. top end landing away from the thrower, bottom nearest to them) then the scoring is completed as though the pole were a clock hand. A pole landing at 12:00 would be considered perfect whilst a pole landing on 11:00 is scored less, as is a pole landing pointing towards 1:00, and so on. Where a pole lands on its end and falls towards the thrower, a much lower score is awarded.

The Caber Toss as it is known today was first recorded as an athletic event in Scotland during the 1574 “wappinschawes” – or weapon showings. There are also rumours that the sport came out of the wartime era, where Scotsmen were required to toss cabers across small streams, in order to make a temporary bridge that allowed them to cross quickly.  It is also believed that the accuracy method of scoring a caber toss event came from the second fable of bridge-making, as the quickly-formed bridges had to be stable to make them safe to use as crossings.

Putting the Stone can be considered an ancestor of the modern day shot put, using a natural stone or rock as throwing apparatus instead of the steel ball that is used in contemporary competitions. Stone weights for the stone put are typically either 16 or 26 pounds for men and 8 or 18 pounds for women,  dependent on whether it is the Braemar stone or Open stone event which is being contested. The stone put is much less accurate than the caber toss, as scoring is based purely on the distance that the rock is thrown.

Like the caber toss, there are a variety of rumours surrounding the origin of the stone put competition. Essential Guide to the Highland Games (1992) author Michael Brander researched the history of the stone put competition, and discussed two different historical events in his book. The first is the Clack Cuid Fir, where a stone weighing over 100 pounds was used to test strength. Competitors were required to lift the stone up to a specified height, or to lift and then place it on a wall. The second rumour is that it came out of the Clach Neart, where a smaller stone weighing around 20 or 30 pounds was thrown, and the competition scored on the landing distance from the starting line.

It is probably clear to you by now that most of the traditional Scottish sports involve throwing an object of sorts, and sheaf toss is no different. In this sport, competitors are required to throw a burlap bag stuffed with straw over a horizontal bar, using only a pitchfork as throwing apparatus. In the main, the burlap bag used weighs 16 pounds (7kg) and each competitor gets three attempts per bar-height to throw the aforementioned bag over the bar, without touching it.

Much like a high jump or pole vault competition, the bar is raised in height once all competitors have cleared the existing bar-height in their three attempts. Only successful competitors go forward to each new height, and the competition continues until just one athlete remains and is crowned the winner.

The exact roots of this sport remain unclear, although there is a common myth that states that its origins lie in medieval times, when knights would use a hay fork to toss flaming animal droppings and bedding materials over castle walls, to set the buildings on fire during sieges. These days, the sheaf toss remains a staple event in the Highland Games. It is also a common event in Irish, French and Australian agricultural shows.

The beauty of the Highland Games is that it not only highlights Scotland’s rich sporting history, but also its love for agriculture across the years. So on your next vacation to Scotland, why not check out just one of the many Highland Games meetings taking place throughout the country?