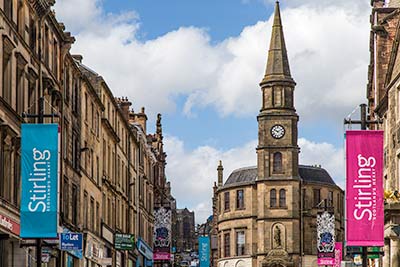 Stirling is the youngest city in Scotland as it gained city rights in 2002 at the Golden Jubilee of Queen Elizabeth the 2nd. Before that Stirling was declared Royal burgh, that was in the year 1130, and it remained so until 1975. However, in earlier times Stirling was the capital of Scotland and it was also important as the “Gateway to the Highlands”, with its position near the Highland Boundary Fault between the Scottish Lowlands and the Highlands.

Stirling, situated in Stirlingshire council, has a little over 45,000 inhabitants making it the smallest city in population, Inverness, also a relatively young city, gained city status in 2001, has a little over 46,000 inhabitants. The main feature of Stirling, and main tourist destination too, is Stirling Castle, clearly visible from miles around the city. It’s often compared with Edinburgh Castle and some folk I know prefer Stirling Castle over Edinburgh Castle but that’s an entirely personal matter. We like to think that they both have their own unique features, historical importance and share equal stunning views.

Stirling Castle, on top of Castle Hill, has a varied building style and the entrance to the castle, with Robert The Bruce looking out over Stirling with the Wallace Monument in the background, is a very impressive sight which also includes Stirling Bridge, famous for the Battle of Stirling Bridge, where the Scots under William Wallace defeated the English in 1297 resulting in thousands of English infantry killed.

Stirling Castle grounds are home to several buildings with different purposes and most of the principal buildings of the castle date from the fifteenth and sixteenth centuries. A few structures of the fourteenth century remain, while the outer defences fronting the town date from the early eighteenth century. Main buildings are the Great Hall, or Parliament Hall, built in 1497, same as the King’s Old Building, on the western side.

To the left of the gatehouse, and forming the south side of the Inner Close, is the Royal Palace, completed in 1542. Furthermore there are the chapel royal, nether bailey and a large number of buildings in the fore-work and outer close. The gardens are well maintained and a pleasure to visit on a sunny and quiet day, especially the Queen Anne Gardens, overlooked by the Prince’s Tower, with a beautiful and majestic tree. The Great Kitchens are a treat for the kids, here you can see what life was like for the people who prepared the feasts for kings and queens. The views all around the castle are stunning and we’d recommend a sunny and clear day for a visit as it adds a lot to your experience. For more info please visit our Stirling Castle Page

Top of the Town Walk and Holy Rude Church

Don’t make the mistake to head back after visiting Stirling Castle as you’d be missing out on a lot of treasures. There are various walks around the castle and walking down from “Top of the Town” there is The Church of Holy Rude, which has been the historic Parish Church of Stirling for 900 years and is the only church still in active use, apart from Westminster Abbey in London, to have hosted a coronation, when the infant King James VI of Scotland (later also James I of England) was crowned in the Holy Rude on the 29th July 1567. The church of Holy Rude is very much worth a visit and do take the time to walk into the graveyard all the way to the back where there’s a wee hill with fantastic views of Stirling Castle. More info on Holy Rude Church

There are a few options to walk down to Stirling Lower Town. There is the back walk which was built between 1724 and 1791, and is regarded as one of Europe’s finest urban walkways. It is the oldest publicly maintained road in Scotland and follows the old city walls up to the castle, then runs around the base of the Castle Rock and back up to the Old Town. Make sure to do this walk and my advice would be NOT to park at the castle itself but park in the lower town, near the railway station. That way you can do the back walk going up to Stirling Castle and take Broad Street or St John Street going back down. The latter two are fantastic walks through the old town and you don’t miss out on Argyll’s Lodging, The Tolbooth and the Old Town Jail, an impressive building with guided tours.

The city centre is a pleasant mix of pedestrianised streets, walkways, excellent shopping facilities and pubs and restaurants. The Stirling Arcade in King St is a restored 19th-century shopping gallery, home to independent stores, fashion boutiques and cafes. The Thistles, close to the railway station, is Stirling’s central shopping mall with well over 80 stores, close by are a few cinema’s. Stirling University is situated close to the Wallace Monument at the foot of the Ochil Hills.

The Battle of Bannockburn, 24 June 1314, was a significant Scottish victory in the First War of Scottish Independence, and a landmark in Scottish history. Stirling Castle was occupied by the English and was under siege by the Scottish army. The English king, Edward II, assembled a formidable force to relieve it. This attempt failed, and his army was defeated by a smaller army commanded by the King of Scots, Robert the Bruce. The grounds at the visitor centre are home to an impressive statue of Robert the Bruce. For more info, tickets and opening hours visit www.battleofbannockburn.com

Museums and other attractions in Stirling

Stirling Smith Art Gallery and Museum is a Victorian museum housing European art and artefacts, plus British pewter and local history exhibits.For more info visit www.smithartgalleryandmuseum.co.uk
The National Wallace Monument. For over 140 years, this world-famous landmark has impressed visitors with its exhibits, displays and stunning views from the top, telling the story of Sir William Wallace. For more info visit www.nationalwallacemonument.com

There is a large car park at the Railway Station, which is a few hundred metres away from the City Centre. Also the Thistle Shopping Centre has two car parks with 1300 spaces. Taxis can be found at the Train Station and for those who arrive by train will be pleasantly surprised by the beauty of Stirling Station, it’s a wee gem!