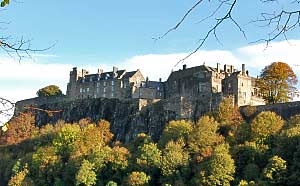 Stirling Castle is one of Scotland’s grandest castles, if not the grandest of all. The castle is situated on top of the 250ft high Castle Hill, an extinct volcano and is open for visitors all year round. It is surrounded on three sides by steep cliffs, giving it a strong defensive position. Stirling became the strategic military key to the kingdom during the 13th and 14th century Wars of Independence and was the favourite royal residence of many of the Stuart Monarchs.

Several Scottish Kings and Queens have been crowned at Stirling, including Mary, Queen of Scots, in 1543. There have been at least eight sieges of Stirling Castle, including several during the Wars of Scottish Independence, with the last being in 1746, when Bonnie Prince Charlie unsuccessfully tried to take the castle.

Most of the principal buildings of the castle date from the fifteenth and sixteenth centuries. A few structures of the fourteenth century remain, while the outer defences fronting the town date from the early eighteenth century. Stirling Castle is a Scheduled Ancient Monument, and is now a tourist attraction managed by Historic Scotland. It towers over some of the most important battlefields of Scotland’s past including Stirling Bridge, the site of William Wallace’s victory over the English in 1297, and Bannockburn where Robert the Bruce defeated the English in the summer of 1314. 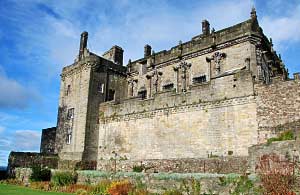 There are a few distinct area’s within the castle grounds. The Outer Defences comprise artillery fortifications, and most of them were built in the 18th century, although some parts date back to the 1550s. The buildings within Guardhouse Square date from the 19th century. Outside the castle is the early 19th-century Esplanade, used as a parade ground, and now as a car park and performance space. This is the only place to my knowlegde where you can take a picture which includes both the statue of Robert the Bruce and the Wallace Monument on the other side of the valley near the Ochil Hills.

The walkways on the Outer Defences also offer the most beautiful views of the surrounding area. The views on a clear day comprise the mountains in the Trossachs such as Ben More, the Ochil Hills, the Wallace Monument and to the south-east the Forth Road Bridge near Edinburgh. The remains of the formal garden known as The King’s Knot, which dates back to the 12th century, are visible as well from the castle.

The gatehouse providing entry from the outer defences to the castle proper was erected by King James IV, and was probably completed in the early 1500s. It originally formed part of a Forework, extending as a curtain wall across the whole width of Castle Hill. At the centre is the gatehouse itself and is now the official entrance to the castle. Within the Forework is a courtyard known as the Outer Close. To the south-east are Georgian military buildings; the late 18th-century Main Guard House, and the early 19th-century Fort Major’s House. The early North Gate contained the original castle kitchens, which were probably linked to the Great Hall. The Great Kitchen which is now visible was constructed later, against the east wall of the castle. 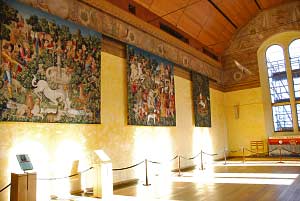 The oldest part of the Inner Close is the King’s Old Building, on the western side, which was complete around 1500. It was begun as a new residential range by James IV, and originally comprised an L-shaped building. The principal rooms were on the first floor, over cellars, and included two chambers with wide open views to the west, although the interiors have been much altered. The royal chapel was established by James IV in 1501 and this was the chapel in which Queen Mary was crowned in 1543. The chapel was later modified for military use, housing a dining room. The wall paintings were rediscovered in the 1930s, and restoration began after the Second World War. Stirling Castle remains the headquarters of the Argyll and Sutherland Highlanders, although the regiment is no longer garrisoned there. The regimental museum is also located within the castle. 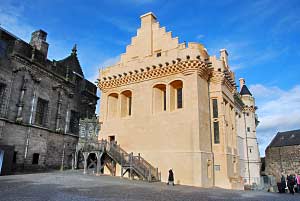 On the east side of the Inner Close is the Great Hall, or Parliament Hall. This was built by James IV following on from the completion of the King’s Old Building in 1497, and was being plastered by 1503. With 42 by 14 metres across the Great Hall is the largest such hall in Scotland. It was agreed that a historically correct restoration could be achieved, and works began which were only completed in 1999. The hammerbeam roof and parapet were replaced, windows reinstated, and the outer walls were limewashed. To the left of the gatehouse, and forming the south side of the Inner Close, is the Royal Palace. A £12 million project to recreate the grandeur of the Royal Palace, re-opened to the public in June 2011. The work which has taken a decade of research and craftsmanship includes the ongoing restoration of the seven hand-woven tapestries; four of which have been completed with the last one due to be finished in 2013. The weaving and restoration of (some of) the tapestries can be seen live in a separate building in the back of the castle. 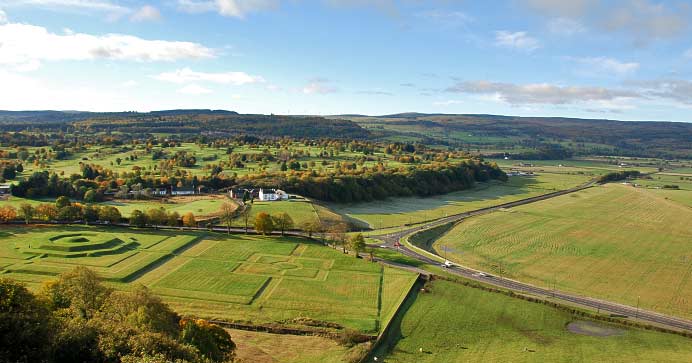 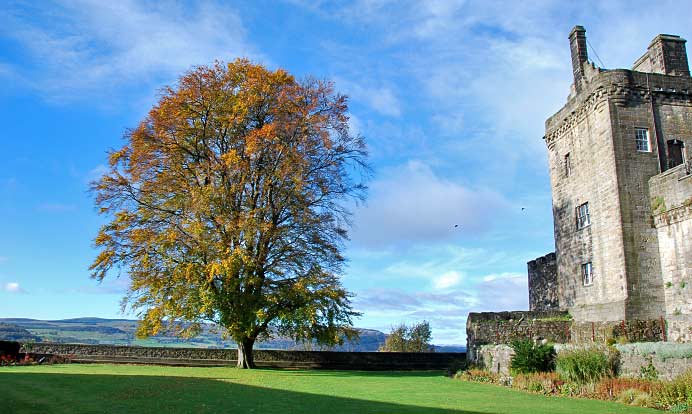 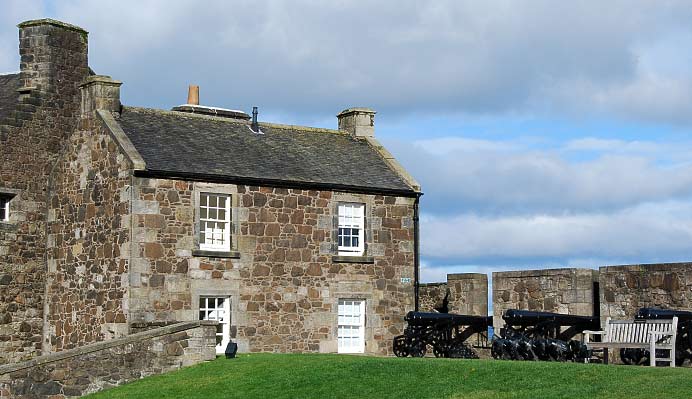 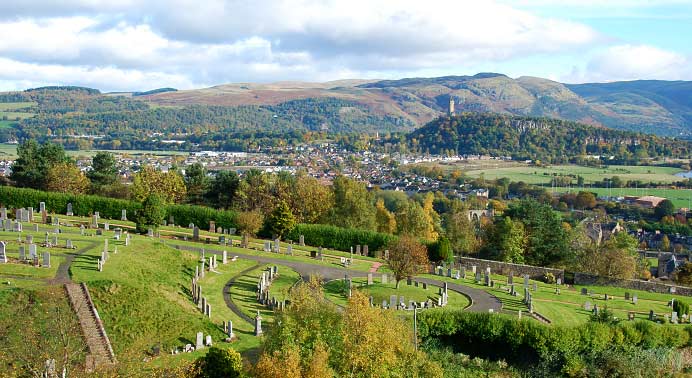 View from Stirling Castle to Wallace Monument and Stirling Bridge 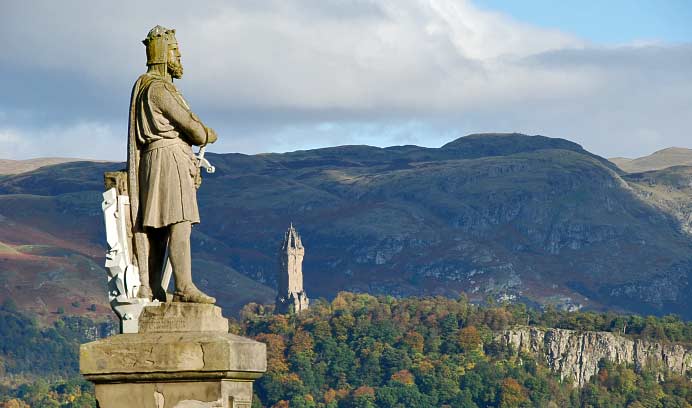 Robert the Bruce and Wallace Monument from Stirling Castle 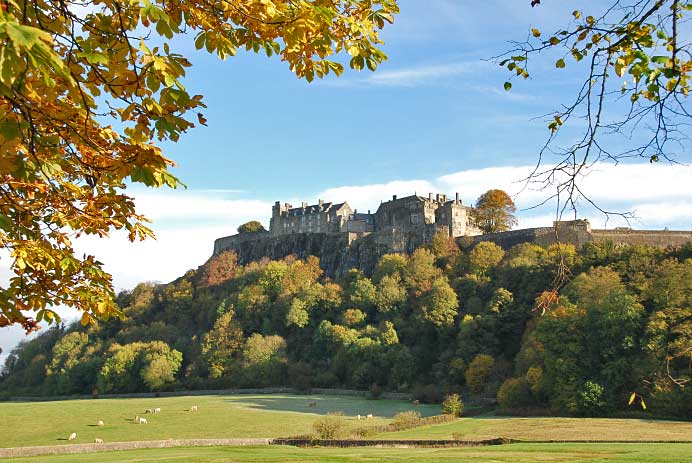