At Garron Point, a little to the north of the town of Stonehaven in Aberdeenshire, a small band of yellowish rock juts out into cold waters of the North Sea: carbonated serpentine, a tough rock that millions of years ago when molten crystallised in a crack formed in the earth’s crust known as the Highland Boundary Fault Line. This is one of the few places in Scotland that you can physically see the geology of this most important of faults; but from the air or even space the division created by the fissure is striking; and its impact on Scottish history even more so.

Around 430 million years ago two small continents, one equating to modern Scandinavia and the other to the eastern seaboard of North America slammed, geologically speaking, into each other throwing up a vast mountain range similar in many respects to the modern Himalayas. At the height of the uplifting phase the peaks may have breached even the 30,000ft ceiling. From these ranges flowed vast rivers, especially as ‘Scotland’ was positioned somewhere over the equator at the time and seasonal heavy rains would have brought significant flooding: depositing sands and gravels that would heavily influence the later geology of northern Europe.

Mountain building, rock formation and tectonic plate movement creeps along at an achingly slow pace; beyond the observation of many several lifetimes, but creep it does, forever and inexhaustibly. Millions of years, the blink of an eye in geological terms can change mountain building to ocean formation as the pressures and strains affecting the earth’s crust move and undulate under the surface. By 400 million years ago, the mountain building stresses were weakening, the forces pushing the plates together relenting in their headlong pursuit. Sedimentary rock, rocks that had once sat at the bottom of an ocean, had been melted, twisted and thrown thousands of feet up where they solidified into brittle metamorphic strata; and now with the pressure released they cracked and faulted along lines of natural stress. 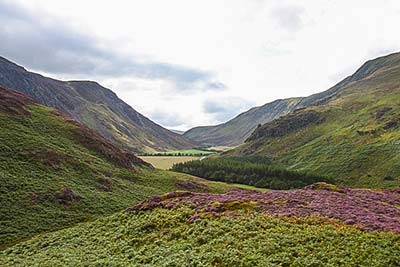 When rocks are mushed together they fold into a sort of wave pattern of what geologists call synclines and anticlines. This is overly simplistic, but fine for our purposes here. One huge syncline – where the fold in the crust is bent down – formed around this time, known today as the Strathmore Syncline. Although full of later sedimentary deposition, the fold still forms the base of the wide Strathmore valley north of Perth and Dundee. The northern limb of the fold cracked under the strain and originated a fault that split across the mountains. Far to the south another fault sliced open, equating today to line stretching from Girvan in Ayrshire to Dunbar in East Lothian; and known as the Southern Upland Fault. The weight of the rock between the two forced the crust down, leaving the two mountain blocks high and dry on either side forming a rift valley. The northern fault then fully developed and became the Highland Boundary Fault Line.

Eons of erosion whittled the great mountains to stumps, and the opening of the Atlantic 100 million years ago tore the long chain into a series of fragments, now scattered across North America and Europe including Scotland and Norway. As the ranging torrents washed the mountains downstream the deep rift valley between the faults filled up with rock that would eventually solidify into a geology known as Old Red Sandstone. Due to Scotland’s geographical position the country was also full of swamps and thick forest; a landscape that would eventually evolve into the vast coalfields of the Central Belt. Modern Scotland was slowly emerging.

The A9 Trunk road is the major arterial route connecting the Highlands with the great cities of Lowland Scotland; and as it drives north from Perth it crosses the faultline near the village of Birnam and the scenery suddenly changes from the rolling arable landscapes of Strathmore to the rugged hills and mountains of the Highlands. There are equally striking changes along the line from Loch Lomond in the southwest to the Angus Glens in the east; and for a large part of Scotland’s history it also marked a distinct change linguistically from English to Gaelic and socio-politically from the feudal system of landownership in the south to the clan system in the north. Until around 1300 there was little much to choose in terms of lifestyles either side, but by 1800 the divergence had become quite distinct.

As populations grew the Lowlands were more able to support the rise and more adaptable to the agricultural changes the demographic increase necessitated; power then centralised around Edinburgh shifting the focus of the realm south and east, and to a certain extent alienating and almost ignoring the north and west. As a result the Highlands with a limited agricultural scope due to unforgiving and harsh landscapes and climate, where the people adopted a certain social structure and warlike existence in order to survive got somehow frozen in time. Gaelic and the nature of Highland customs and dress became, seen from the point of view of the south, as a backward anachronism; and its warrior lifestyle was generally feared.

Even following the destruction of the clan system and the rule of the warlords at Culloden in 1746; which was fast followed by the Clearances that stripped the area of its greatest asset – its people, there remained a sense of them and us. The old Gaelic phrase Mi run mor nan Gall, which translates as ‘the Lowlanders great hate of the Highlander’ was well used throughout the Victorian age, and while that animosity developed more into a ‘never the twain shall meet’ by the early 20th century there remained a palpable difference. However, and somewhat ironically the clear-water, clean-air, seemingly easy lifestyle of the Highlander, living as he did among some of the most outstanding natural scenery in Europe became a major draw for tourists from the Central Belt and beyond especially following the rise of the motor car. People began to realise that far from being backward the Highlander (and Islander) might just have it right. In time, it became cool to wear Highland dress (the kilt), holiday in the north and eventually up-sticks and move there.

Technological advances and improvements in the road network since the 1960 have narrowed the gap in lifestyles and amenities north and south to a ubiquity not seen in 800 years; yet, the landscape changes are there, the wildlife and land use transforms almost immediately you cross the fault line; the accent alters perceptibly and the pace of life still slows. The Highland Boundary Fault remains not only the most important geological division in Scotland but its greatest cultural boundary as well.