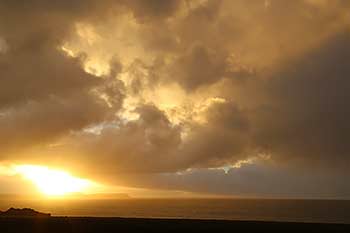 The weather in Scotland doesn’t differ that much from other areas in the UK although Scotland is a bit more cloudy, somewhat wetter, windier and the average temperatures are lower, especially in the (far) north. Overall one can say that the weather in Scotland is very changeable and depending on the season, altitude and region, there can be big differences. Heavy snowfall and blizzard like conditions can occur on the highest peaks of the Cairngorms while the south of Scotland can have dry weather. And sometimes the peaks of the Cairngorms are bathing in sunshine whilst the lowland is covered in mist and low clouds. When low pressure areas with warm air arrive from the Atlantic Ocean heavy rain can fall in the West Highlands for days, while the east coast remains completely dry.

It is often said that there are four seasons in a day and quite regularly that’s the case. Another saying goes as follows “If you don’t like the weather, wait five minutes”. So there’s no “golden rule” for the weather, it is as changeable as humans are. If you’re holidaying in Scotland it’s sometimes better not to pay too much attention to the weather forecast. Quite often, due to all the local differences, I’ve seen many bad forecasts turn into a beautiful day.

When is a good time to visit Scotland?

A question that is often asked… What is the best time to visit Scotland? My first response would be to say late spring to early summer (April to July), that’s the short answer. The long answer is that there actually is no short answer. Spring is often sunniest on the west coast and on the islands in the Hebrides but as the weather is very changeable it can just as well be rainy and windy. Summers can be great but they can be horrible too. And there are sometimes weeks of fabulous weather in the autumn but it might just as well be the other way round. The Scottish weather is changeable, all year round!

As a general rule for most visitors I would say to try and avoid November to February, these are typically the months with winter storms, snow, rain, ferry disruptions and little daylight and not to forget rain falling horizontally, waterfalls going up and waves being blown back into the sea 🙂 But… These months can be fantastic for visiting distilleries, photography, skiing, making refreshing beach walks, visiting cities and spend some more time in museums, pubs and other attractions. We have also written a lengthy blog post with all the pros and cons of each Scottish season to help you further. For the authors of this website Scotland is great in every season, it can be for you too!

The Mountain Weather Information service produces forecasts for a number of mountain areas in Scotland. A major revision for each area is released at roughly 4:30pm, with updates to the forecasts being made whenever necessary during the day. A necessary resource before taking off into the hills. www.mwis.org.uk/scottish-forecast

The best of the sunshine is for Ayrshire and the south-west coast, Lothians, Angus and Fife, the least for the mountains in the Highland region. The peak in sunshine hours falls in May and June and the least sunshine is for December and January. Because of the high latitude the winter days are very short but are compensated with long summer days with only 5 hours of ‘almost darkness’. Check out the Daylight Hours in Scotland table to find out about the amount of daylight in each month.

Rainfall is another key element of Scottish weather although it is not as bad as people sometimes tell you. Some areas receive about 3,000 mm per year (the western Highlands) and other areas only 800 mm per year (the east coast). Measurable rainfall occurs on over 250 days in the Highlands to 175 days per year in other parts.

The winds favourite direction is from the south-west and strong winds occur more often and are the strongest in the Western Isles and the north-west coast .

January and February are the coldest months with an average of around 5 to 7 °C. The summer months have an average of about 15 Celsius (Glasgow). The annual mean temperature on Ben Nevis (1344m) is -0,3C. Snowfall occurs on less than 20 days near the west-coast to more than 100 days in the Cairngorm Mountains mainly in the months December to March.

Weather Poetry – (with a smile)

It rained and rained and rained,
The average was well maintained;
And when our fields were simply bogs,
It started raining cats and dogs.
After a drought of half an hour,
There came a most refreshing shower;
And then the queerest thing of all,
A gentle rain began to fall.

Next day ’twas pretty fairly dry,
Save for a deluge from the sky.
This wetted people to the skin,
But after that the rain set in.
We wondered what’s the next we’d get,
As sure as fate we got more wet.
But soon we’ll have a change again,
And we shall have….. A drop of rain.

Wettest counties
From the ten wettest counties in the UK, six of them are in Scotland – Argyllshire 2200mm, Dunbartonshire 2000mm, Inverness 1970mm, Ross and Cromarty 1800mm, Buteshire 1720mm and Kirkcudbrightshire 1630mm. The other three counties are in Wales and one in Cumbria.