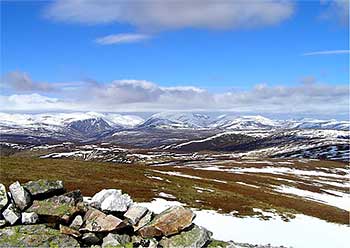 Cairngorms National Park is located in northeast Scotland, officially established as a park in 2003.  At 1,467 square miles, it is Britain’s largest National Park and located within the heart of the Scottish Highlands. The park has a large upland plateau, and is categorised as a “protected landscape” which allows for limited development within its borders.

The park is home to reindeer, ospreys, eagles, wildcats, red squirrels, and boasts an extensive array of activities that range from hiking, skiing, and traditional villages. The Cairngorms National Park is truly a thrilling land of adventure and discovery, and it also boasts natural wonders containing, mountains and gorges, forests and rivers, and within the park you will wonder in the delight of ancient highland communities and whisky distilleries.

With a rare wildlife stronghold and a landscape shaped by the ice ages, the peaty rivers, lochs and ancient forests ensure the Cairngorms are full of scenic variety and a treasure trove of natural wonders. Next to the mountains, the ancient Caledonian forests are probably the most striking feature of the Cairngorm landscape. Set around remote lochs or fringing spectacular stretches of wild open moorland, these forests are centuries old, cover huge acreages and are easily accessible right across the region. 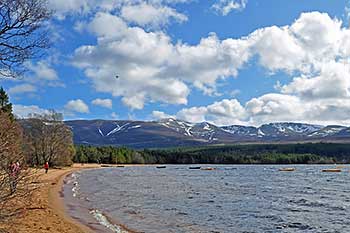 The waters offer a variety of scenic delights including gorges, waterfalls and tranquil expanses of little – frequent waters. The lochs are home to rare birds, otters, wild brown trout, arctic charr and pike. Loch Garten is famous for the Osprey centre, where these iconic birds can be watched as well as other wildlife of the Scottish Caledonian Pine Forest.

Tourism is a vital part of the Cairngorms National Park economy and it’s communities are keen to welcome visitors and share the regions treasures. The National Park was setup to conserve it’s natural and cultural heritage to promote the sustainable use of its resources and to facilitate greater understanding and enjoyment of its natural and historic assets.

Things to do in the Cairngorms

A visit to the Cairngorm Mountain Centre is an essential part of any trip, regardless of the season.  The winter months attract skiers and snowboarders with high-quality ski runs – seven green, six blue, and eight red – and an extensive snowboard park.  When the snow has melted, a number of guided walks are offered to explore the beautiful landscape around the Centre.  These range from the 4-5 hour Northern Corries walk to the less extensive 90-minute Walk to the Top.

Map of the Cairngorms National Park

Cycling in The National Park

Cycling within the park is also a major attraction, with more than 39.5 miles (64 kilometres) of off road trails.  Amenities are currently being built within the park, with the Glenlivet Mountain Bike Trail Centre stated to open in late 2013.  Some highly recommended routes include Speyside Way, Badenoch Way and the Cateran Trail.

The Highland Wildlife Park within Cairngorms contains native Scottish wildlife along with endangered animals from all over the world, including musk oxen, tigers, and polar bears.  The park has won awards for its wolf enclosure, and the popular Keeper for a Day program allows visitors to learn from professionals and get up close and personal with the animals. 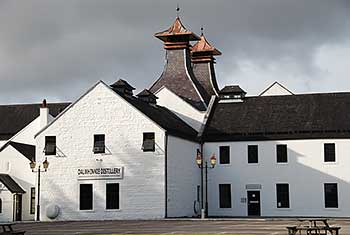 While the wild beauty of the park is stunning, there are also a number of amenities that add a level of comfort. The Dalwhinnie Distillery (claim to fame – the highest distillery in the country) has been open since 1897.  The tour provides insight into whisky-making techniques used to this day to produce world-class spirits.

There are also a number of attractions that allow visitors to explore the human history of the Highland area.  At the Highland folk museum at Newtonmore, interactive exhibits provide a window into the traditional way of life of the Scots who lived in the area. Aultlarie Farm is a reconstructed working farm that recreates life in the 1930s, allowing visitors to learn traditional crafts and wield old-fashioned tools. A nearby townstead recreates the 1700s, providing a taste of life even farther back in Scottish history.

There are a number of attractions near the wildlife park.A mere 10 minute drive brings one to the Ruthven barracks, the site of many historic conflicts. The barracks were built in 1721 later captured by Jacobite forces, an example of Scotland’s dramatic and often turbulent history. The nearby Balmoral Castle and Estate in the Royal Deeside is still used as a royal residence today and guided tours take visitors into selected rooms inside the estates.

Things to do in the Cairngorms on a rainy day 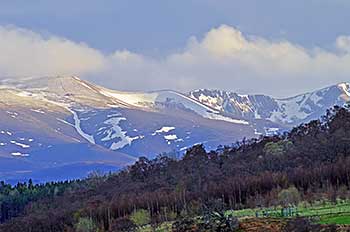 Don’t despair if the weather turns against you when on holiday in the Cairngorms because there is plenty of indoor fun, interest and excitement to enjoy.

Rainy summer days can be occupied with a visit to a castle or a distillery – a warming dram always chases the clouds away! For something a bit livelier, the leisure arena at Aviemore Highland Village and the fun house at Coylumbridge are great destinations where children can let off steam. There is also the indoor climbing wall at Dalfaber in Aviemore to keep thrill-seekers entertained.

Board the heather hopper, the bus service that travels a high-level scenic route right across the hills between Braemar and Aviemore via the hilltop village of Tomintoul. This is fascinating ancient community with a distillery, a great heritage museum and plenty of places to eat. The Strathspey Steam Railway also gets you out into the country or take a Landrover safari for something different.

Winter visitors facing closed ski slopes can still get their thrills on the hill-side karting at the Lecht, or on a fun mountain bike circuit. A sled dog ride is a great way to view the scenery and even if the snow is thin on the ground, you can go sledging on the artificial slope at Glenmore.

If you have arrived by public transport and would like to adventure into the wild country of Scotland why not take some Car Hire and have the freedom of going where you like and when you like, the freedom of having your own car in Scotland is fantastic and there are roads that can take you to places you would have never dreamed of attempting on foot, many secluded beaches and magnificent view points are easily reached by car and best of all you dont even have to get wet, just take in the great views from the car. Car Hire is easily booked in Scotland with many companies offering great deals.