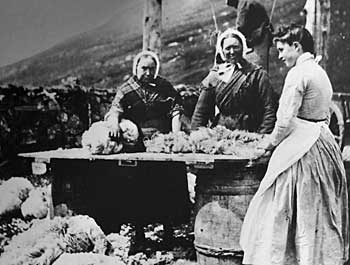 Cloth-making was women’s work and the tedious chores were often enlivened by groups of carders and spinners coming together to sing while they toiled. Before the Cheviot and Blackface sheep were introduced to the Islands, the small native tan-faced sheep was shorn for its wool.

The wool was scoured in rainwater softened with bran and the fleece was opened out and dipped in the heated soapy solution. When it was clean, with the natural greases removed, the soggy mass was rinsed out and laid on the grass or heather to dry. A mordant was used to fix the dye; this could be urine which was kept in a special tub, and tipped into a pot of water; the wool was submerged in the liquid. Slowly, the dye liquid was brought to the boil. A stream was chosen for dyeing and beside it, a large iron pot was placed over a peat fire. In the steaming water, the colourful leaves were infused; just like boiling tea.

It all became easier when the muckle wheel appeared; later a wheel with a foot treadle was introduced and in about 1800 a flyer was adopted which allowed the yarn to be automatically wound on to the spindle. Although spinning was less strenuous than hand carding, it took up 50% of the total time taken to convert the wool into a finished web of cloth. The vertical warp threads were arranged by winding them round pegs attached to a frame; they were removed in the form of a running chain and attached to the warp beam of the loom. Much cloth used to be woven on the hand loom called the bearst bheag (small loom), its shuttle, a sheep’s shin bone, was thrown by hand.

For carding, the wool was put between two flat boards with wire teeth which were scraped together. It was tiring work and the women’s wrists and arms would often ache. In the days before the spinning wheel was introduced, a spindle and whorl were used; merely a rod thrust into a disc of wood. The task was laborious, but being repetitive was often combined with other chores, like the herding of cattle or sheep. 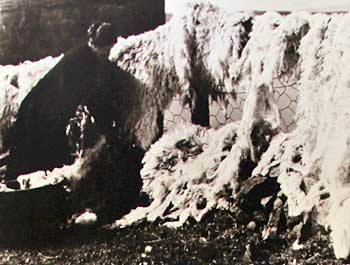 There grew up a rich tradition of waulking songs, some serious and slow for singing at the beginning and end, some quick and jolly, most of unspecified length so that they might continue until the cloth was ready for the next process. As the material softened it also shrank and the leader would measure it in finger-lengths to determine whether another song was needed. “How many songs will it take?” they asked of a piece of cloth.

No song was ever repeated, for this would bring bad luck to the workers, and offerings of milk were sometimes made to a fairy-woman. the “Ioireag”, who was believed to be present at a waulking. The process had sometimes seven stages, sometimes nine or twelve: all magic numbers for the Gael.

Before an Act of the Scottish Parliament made it compulsory for all of the “laborious classes” to weave what became known in the Isles as “riochd-mallaichte” – the accursed grey, the Hebrideans were a multi-coloured people. The numbers of colours appearing on a garment gave indication of rank: one was for servants: two for rent-paying farmers: three for officers: five for chiefs: six for poets and seven for kings and queens. 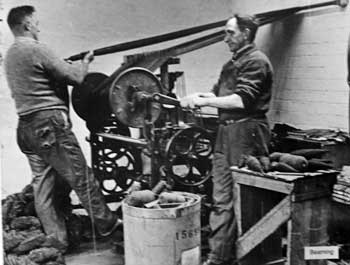 Dyed wool fibre is converted into yarn for weaving in several stages. Firstly, the fibres are oiled to replace natural oils lost during the dyeing process and to protect the fibres during carding and spinning: different shades of fibre are then blended to achieve the required colour mix by passing the fibres through a teasing machine. The next stage is carding, in which both dyed and undyed fibres are further teased and blended and finally drawn out into a continuous web of untwisted fibre, called slivers or rovings. These slivers of fibre are regular in weight and thickness but have no tensile strength. This is achieved by spinning the slivers into yarn.

At one time a woman (spinstress) would have drawn a perfect thickness of yarn on her spinning wheel but now a machine does the work. Based on the Spinning Jenny, invented by Hargreaves in 1764. this machine stretches the rovings. wound on tiered spools. to an even thickness. twists to give the yarn strength and finally winds the strong. even, well-blended thread onto a cop or bobbin. 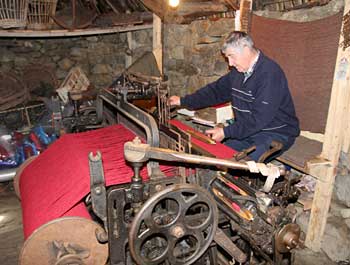 Woven cloth consists of two sets of threads. or yarn. The warp runs lengthwise. the weft across the cloth. Warping is still done by hand and involves arranging yarn according to a colour sequence on a tiered hank of bobbins and winding it onto a frame of wooden Pegs The yarn is then gathered together in long hanks and distributed to the weaver along with the necessary amount of weft.

Harris Tweed
The answer was to find a trade mark – the Dunmore family arms which consisted of an orb and Maltese Cross were chosen – and to form an association which could protect the interests of the worker in the Hebrides who produced an entirely hand-made tweed. But gradually the hand-spinning and home-dyeing practices disappeared. When the First World War came, the weavers went to the trenches; so the women forsook their spinning and took up work at the looms.