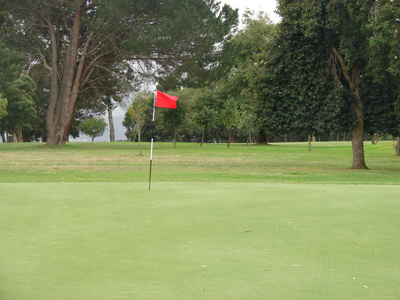 With Muirfield Golf Club having hosted the British Open Golf Championship last month, the world has recently cast its eye over one of the most famous golf regions in the world. Muirfield however is just one of sixteen top class golf courses spread out over this 20 mile stretch of coastline. It is renowned over the world for offering some of the finest golf links found anywhere, including the oldest course in the world. It is for these reasons that East Lothian pulls in golf enthusiasts from all over the globe every year.

From Edinburgh, travel east along the A1 and you will find yourself in East Lothian. It is in Musselburgh that you will find the oldest golf club in the world; The Musselburgh Links. These days surrounded by the racecourse. This 9 hole course was one of the oldest locations (after Leith links) to have documented evidence of golf being played in 1672. It hosted a number of open championships in the 1800’s and even today visitors and green fee payers can hire hickory clubs and period costume for the ultimate step back in time. The history is evident here and is an ideal stop off for those visiting Scotland’s Golf Coast. Two miles away is the second of East Lothian’s royal acclaimed courses; Royal Musselburgh Golf Course. Although more of a parkland setting amongst pine and oak trees, it still carries a links feel and is ideal for those searching for a bit of both world’s.

Traveling down the A198 you will come to Longniddry. This gem of a golf course, with windswept fairways and white sanded bunkers, boasts one of the finest links experiences found anywhere in the world. It is regularly chosen as a qualification course for entry to the Open championship when held at Muirfield and last month was no exception. Golf in East Lothian isn’t just restricted to the old, established courses. There are newer courses too, and Craigielaw, found between Longniddry and Aberlady, is one of these courses. Founded, in 2000, Craigielaw has built up a reputation as a stern test of the game, owing to its deep bunkers and open layout that is exposed to the elements. Craigielaw has hosted many tournaments and has even been muted as a possible future venue for the Scottish Open, which has recently announced its policy of course rotation throughout the country.

Travelling further east you come to Gullane, a golfing mecca for those searching the ultimate in links golf. On entering the village you immediately realise the strangle-hold that golf has on the village. There are 4 courses that surround the village, Luffness and Gullane No.1, 2 and 3. The imposing clubhouse and golf professional shop dominate the entrance to the village and showcase the golf club as a whole. All of these courses have previously been qualification courses for past open championships and provide the ultimate test in links golf. So much so that at the top of the 7th hole which looks out over Muirfield and beyond to Edinburgh, has been regularly mentioned as the best view in golf, a statement made famous by 16-time major champion Jack Nicklaus.

Travelling further East you pass the famous Muirfield, which last month hosted the British Open and in which Phil Mickelson reigned triumphant. The golf club was surrounded in controversy during this time due to its strict men only policy, a policy which is hotly debated. Next to Muirfield is the 7 year old club at Archerfield. Despite its infancy Archerfield has hosted some major tournaments including the British Ladies Open in 2011, and is also tipped to host the Scottish Open in the future. Archerfield House, a famous 18th red sandstone building with luxurious gardens reminds you of the prestige of the area, especially when you consider the £10,000 joining fee.

The next stop on the golf coast is North Berwick, another classic links course. It is also a qualification course for British Open at Muirfield and attracts hundreds of visitors each year; mainly due to its traditional 9 out and 9 back links layout. North Berwick is one of two courses in the town, the other – The Glen Golf Club – lies at the east end of the town. Following the coast south east you’ll find the Dunbar Golf Club which was established in 1856 and offers a challenging links course amidst stunning scenery.

While only a small insight to courses in the area, East Lothian hosts a plethora of golfing options for even the most discerning golfer. This article has only mentioned some of courses in the area. East Lothian has a magnitude of fine parkland courses, like Whitekirk, Haddington, and Gifford. Whether your preference is links or parkland, the choice that East Lothian offers is second to none, and should not be overlooked lightly when planning your next golfing trip to the home of golf.

Why Scotland is a special place for Golf