Cycling the West Highland Way in two and a half days – Whose bright idea was that? 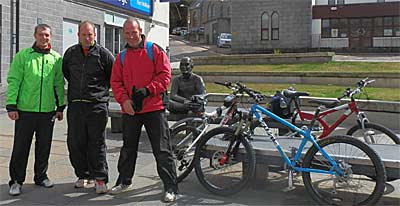 Robert Shaw, Simon Freeman and Allan campbell cycled the full length of the west highland way (96miles) over 3 days. They started on the 29th April 2013 in memory of Robert’s dad Bobby Shaw. Every one of us will be affected by cancer in some way during our lives so we thought we ‘d try and raise much needed funds for a great cause!

Simon Freeman writes: If I`m honest, it was probably my fault. Robert Shaw and Allan Campbell were quick to show their enthusiasm for the project though, and so the plan was formulated-we would raise as much money for Friends of the Beatson and Islay hospital in memory of Robert`s Dad Bobby Shaw, and we would publicise the fundraising effort by aiming to ride bikes over some extremely unsuitable territory from Fort William to Milngavie in less than three days.

After an overnight stay at the Highland Gateway Premier Inn, we caught the Monday morning train from Queen Street to Fort William. This turned out to be one of the most scenic trips any of us had ever been on, as we were treated to the very best of the diverse landscapes Scotland has to offer. From the steep hillside along the banks of Gare Loch, through Arrochar and on past Crianlarich, we eventually headed into the vast area of incredible emptiness that is Rannoch Moor. Enormous snow-capped mountains formed a vista of heather and pine forest for mile upon mile without so much as a road or pylon to spoil it. This sedentary tour of Scotland couldn`t go on indefinitely though, and eventually the train trundled onto the shoreside at our destination.

Suitably motivated by our grand tour, we scoffed a quick meal deal and wheelied into the hills. Round the road into Glen Nevis, we ate up the first two miles before being diverted onto a lung-busting climb that saw us ride from sea level to 1000 feet within the first hour of action. This introduction to the brutality that was to follow was rewarded by a superb scenic thrash down the ribbon of singletrack that leads into Lairigmor, a high glen so peaceful and exposed as to make it hard to imagine humans ever having laid an obtrusive finger on it. As we trundled through this desolate valley the trail began to fall away from us, until eventually we caught sight of Kinlochleven. As keen as we were to stock up on supplies, we were still determined to enjoy the best of the riding, and this descent turned out to be the absolute highlight of that aspect of the trip. An 800 foot drop in height through a selection of hairpins, steep rock steps, drainage ditches and tree roots combined to form one of the best downhill trails I have ever ridden, and it made it even more of a joy that I was completely unprepared for how utterly brilliant it turned out to be. As I was spat out of the chute at the end of this section with a rapidly deflating rear tyre, I turned to see how the two less experienced bikers in our group had fared. While Robert emerged from the trees sporting an enormous grin, Allan arrived on foot with a puncture and a missing front brake piston. While I was able to fix the tyre, it was clear that things were not going well for his bike- would we be able to limp it to the finish?

Refuelled, we took to the old military road that leads to the top of the Devil`s Staircase. Two things immediately became apparent: 1) This isn`t a road. Most of it isn`t even a good track. 2) It goes on forever. And it is very, very steep. By the time we had got to the twenty mile mark at 1600 feet above sea level, with the light fading and the rain belting down, I began seriously to worry about our ability to make it across the moor to Kingshouse before darkness enveloped us. To their credit though, my two accomplices maintained enough pace to allow us to reach the relative safety of the Staircase before dusk. While Robert gleefully dropped in, embracing his new-found love of downhill mountainbiking, Allan`s mood was less buoyant. The harsh rocks had dealt his back tyre another pinch flat, and his freehub was making some very ominous noises.

Regular doses of cramp on the steep climbs were not helping matters either – for Allan the sanctuary of the hotel could not come quick enough. As he pushed his injured bike down the rock steps, I set off in pursuit of Robert, finally reeling him in at the foot of another fantastic descent as his now boundless enthusiasm tempted him to push the limits of his modest steed a little too far – over the bars and into the heather! Freewheeling into Kingshouse, exhausted both mentally and physically, we couldn’t have been more delighted with the warm, comfortable surroundings of the old hotel. The food was great and the staff could not have done more for us, suffice it to say we would recommend this place to anybody planning a foray into these hills. Unfortunately we didn`t have time to truly appreciate the spectacular view of a sun-drenched Buachaille Etive Mor that greeted us from our bedroom window on Tuesday morning – we had bikes to ride and 39 treacherous miles to cover so we scoffed the biggest breakfast the staff could muster and saddled up once again. Everything went well … for about a mile. Robert and I had set off into the distance before looking back to see a forlorn figure pushing his bike. This did not look good! Read more in part 2