Allan’s bike grinds to a halt, leaving him to take on a supporting role as Robert and Simon press on to Milngavie

As Allan and his bike got closer it dawned on me what had happened – the creaking freehub in the back wheel had completely collapsed, and in an instant that was it, game over. All that preparation, all the planning, ruined by a simple bearing. Such is life in the mountains though – this was an extreme challenge and we always knew there was a chance that any of the bikes might have let us down. Allan`s only option was to turn back to Kingshouse, leaving Robert and myself to push on towards Bridge of Orchy to meet my dad, who would join us for the section to Crianlarich. The feeling of disappointment we felt for our fallen comrade was only exacerbated by our enjoyment of the beauty of Glen Orchy, and with the glorious sunshine lighting up the incredible scenery on either side of General Wade`s ancient cobbled road. We hardly noticed the effort we were putting in as we munched through the miles. We arrived in Bridge of Orchy bang on schedule, picked up my Dad and his friend Una Woodburn, and pressed on towards Tyndrum.

After lunch at the Green Welly Stop and a sedate trundle alongside the riverbank, we left the part-timers at the road junction into Crianlarich and headed uphill into the forest. Looking at the map today I can`t believe this woodland walk only covers a little over two miles – it was a steep and sweaty climb that just seemed to go on forever and it made us suddenly aware that the fifty off-road miles we already had in our legs were starting to take their toll. Finally we welcomed the relief of the gate that would reveal the wide track that would take us downhill towards Inverarnan and the head of Loch Lomond. Unfortunately for us this particular wide track was ankle deep in mud and surfaced with rocks the size of footballs, so we were faced with the demoralising prospect of pushing our bikes for several miles down to the road crossing. I was lucky to have Robert with me for the trudge down to Beinglas Farm. Had it not been for his enthusiasm I might have struggled to find the motivation to reach this refuelling point. His reward was a quick stop for a Calippo (other ice cream brands are available), a bottle of water and a phone call home, giving me time to recharge my batteries for the heinous last section to Inversnaid. We knew this bit was going to be tough, but nothing really could have prepared us for the three whole hours it took us to walk, push and carry the six measly miles. It was just as well Allan arrived to take charge of moving us into Inversnaid bunkhouse, because neither Robert nor myself had a functioning brain by the time we finally arrived!

We elected for an early start on day three, and after the last couple of miles of shoreside were completed and the long, boring climbs into Rowardennan were out of the way, I started to enjoy riding my bike again. This was in stark contrast to how my partner was feeling – his body was in complete shock at being asked to do all this again, and sickness was hampering any effort he was making to work his way through the remaining 33 miles. Luckily he had Allan to help him – having a supporter to keep him on track and supply him with food undoubtedly helped him on to the finish. Safe in the knowledge that Allan was there to look out for Robert, I pushed on, blasting the flowing sections of wooded singletrack towards Balmaha, emerging at warp speed down the steps at Craigie Fort to find Allan waiting with ham rolls and a welcome coffee. Buoyed by the intake of calories, I took on the brutal climb up Conic Hill, stomping the newly built staircases with my bike on my shoulders until my lungs were at the point of exploding. The reward for forcing the pace all the way to the top was one of the best views in Scotland. Low cloud hung menacingly over the loch and a rainbow split the patch of sunlight that lit up the fields on the far shore. This was definitely a sight worthy of the five minutes it took to recover from the 1000 foot climb. With no more time to waste, though, it was on down the steep, newly resurfaced path and through the forest to Drymen, then past Glengoyne Distillery, round the back of the hill at Strathblane and past Craigallian loch, before we all met up again at the entrance to Mugdock Country Park for a leisurely walk into Milngavie. 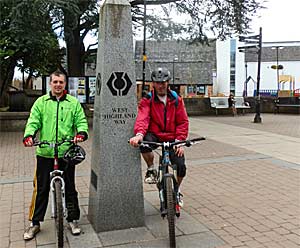 That was it then, the finish. Three days that cemented friendships when it could have broken them, three days that showed us how hard we can push ourselves (and our bikes!) if we really try, and three days when we saw just how stunning, diverse and at times how downright dangerous the glorious Scottish countryside really is. But most importantly, these were three days when we raised a substantial amount of money to support good causes, backed by so many people both on Islay and on the mainland. Thankyou all so much for contributing to our fundraising efforts, which has resulted in us raising over £4000 to help these worthy causes.

Anybody who has not yet donated to this cause and who wishes to do so can still access our donation page at http://www.justgiving/portellenboys