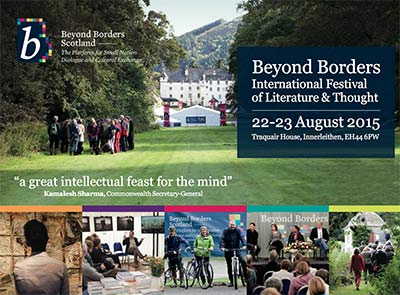 First Ministers Past and Present Gather at Traquair House

Beyond Borders Scotland has launched the programme for its sixth International Festival of Literature and Thought – held at Traquair House on August 22 & 23 – welcoming three First Ministers, past and present, to the platform to share their personal experiences and future hopes for Scotland in the UK and the wider world.

Mark Muller Stuart, Executive-Director of Beyond Borders said; “We believe there is something for everyone in this year’s programme. Whether you are interested in politics, literature, art, music or spellbinding stories from around the world, Traquair House and its beautiful grounds offer the perfect setting for a weekend of vibrant public debate, walks, rides and food tasting. We urge everyone to come and travel beyond borders.”

This year the Scottish political landscape takes centre stage with panels uncovering the lives of some of Scotland’s foremost politicians. Scottish First Minister Nicola Sturgeon and Alex Salmond MP join the Festival on different days to discuss the impact of the Referendum and the General Election as well as what it means to be the First Minister of Scotland, while Lord Jack McConnell reveals what happens when you lose high office in ‘What Jack did Next: Life after Politics’.

Looking further afield, 20 years on from the tragic events in Srebrenica, Scottish Conservatives leader Ruth Davidson MSP goes back to her roots in journalism to interview veteran foreign correspondents Janine di Giovanni and Allan Little about reporting from international conflict zones in ‘Srebrenica Remembered’. This panel will be accompanied by all-day screenings of Srebrenica Survivors, a documentary film directed by Bosnian Samir Mehanovic, which tells the stories of those who survived the genocide.

Other international talks feature Magnus Linklater on the rise of Islamic State, veteran UN diplomat Staffan de Mistura on the search for peace in Syria, and Indian politician Shashi Tharoor on the future of India.

On a more light-hearted note Steve Richards returns for a satirical look at the UK’s political classes with Sir Menzies Campbell, while Yasmin Alibhai-Brown performs her Fringe show ‘Promiscuous England.’ Other theatrical performances include Guy Masterson’s award-winning rendition of Under Milkwood, and Gerald Gifford plays a unique collection of 18th century pieces on the Traquair Rucker’s harpsichord.

Richard Demarco, Director of the Demarco European Arts Foundation, who will speak about his life in the arts in celebration of his 85th birthday, said of the Festival, “This Festival puts Traquair on the international map and gives a new and dynamic beating heart to international arts festivals.”

The full Beyond Borders Scotland Summer Events Programme and Box Office is available online at www.beyondbordersscotland.com