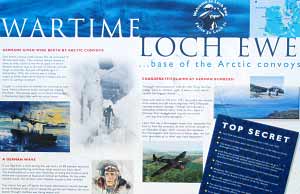 Loch Ewe has a side many people are unaware of; this beautiful north-facing loch in Wester Ross was used as a convoy collecting point with a strong naval presence during WW2. Loch Ewe is a natural deep water sea loch that links to the Atlantic Ocean via a relatively “narrow mouth” which made it easier to protect the loch from enemy submarines. There was one Heavy Anti-Aircraft Battery and one troop from a light Anti-Aircraft Battery at Loch Ewe, about 12 officers and 380 men altogether. It was in February 1941, when the loch became a convoy collecting point, that its presence became permanent. 379 Battery of the 101 Heavy Anti-Aircraft Regiment had the longest stay, from 1941 to 1942. There were plenty of air raid warnings, but attacks on the base were rare. According to the battery war diaries, the guns were fired only a few times each month, usually at reconnaissance planes. 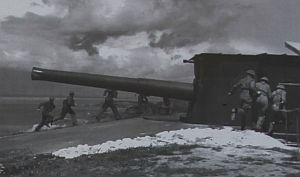 The Arctic convoys that left from Loch Ewe provided vital supplies to Murmansk and Archangel in Russia. Besides the anti-aircraft regiment the entrance of the loch had a boom net and a mine defence system helped protect the vessels in Loch Ewe from German submarines (U boats). At Rubha nan Sasan, on the western tip of Loch Ewe is a war memorial to the crews lost on Russian Convoys. Due to its wartime destination there are many ruined gun-emplacements and remains of other small buildings scattered around the loch. There is a booklet for sale in local bookshops which contains a lot of information about Loch Ewe in the war and it makes a pleasant read. The booklet also mentions an incident at Black Bay, a mile west from Rubha nan Sassan, north of Cove. 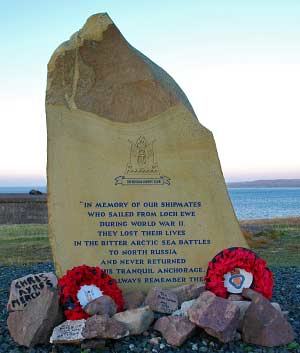 Ships that arrived in Loch Ewe had to pass an examination vessel and once through the boom net, for protection against subs, they were allocated places to anchor. Only the convoy commodore’s ship was allowed to moor up to a buoy, which gave direct communications with CASS (Convoy Anchorage Signal Station). This concrete base of CASS can still be seen on a high point of the road just south of the current NATO refuelling pier. The merchant shipping anchorage was south and west of Isle Ewe, whilst Royal Navy vessels were anchored between the island and Aultbea.

The last convoy sailed from Loch Ewe on the 30th December 1944. Altogether four hundred and eighty one merchant ships and over one hundred naval escort vessels left Loch Ewe for Russia in a total of nineteen convoys. For many hundreds of men who made the ultimate sacrifice, the cold grey water of the North Atlantic is their resting place. For these men the enfolding arms of Loch Ewe and the outer isles fading in the distance was the last sight of land they had, before the Russian convoys exacted their terrible price paid in human lives. 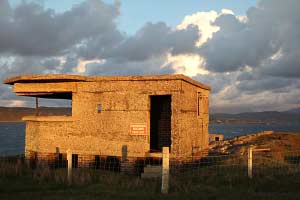 An American flag liberty ship “SS William H. Welch” went aground in Black Bay during the night of 25th February, near the entrance of Loch Ewe, in gale force winds, heavy snow and conditions of poor visibility. Of the crew of 74 only 14 members were washed ashore. A search party was sent to Black Bay and the shipwrecked survivors were admitted to RN sick quarters in Gairloch suffering from severe exposure and effects of immersion. A report by the United Seaman’s Service states: “It was the crofters who came to the aid of our merchant seamen on the worst winter’s night of the year, a day of snow, hail and biting cold. They carried tea and blankets representing weeks of meagre rationing over miles of rocky moors to revive the exhausted men. For hours they searched the boulder strewn beach for survivors.” 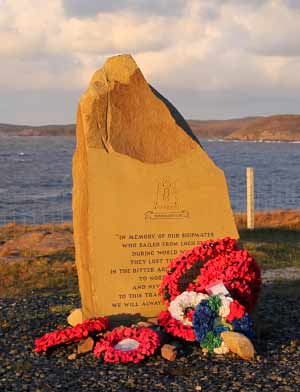 The storm swept down out of the darkness and struck the ship as if its fury were aimed at her alone. It came suddenly and bore with it stinging, swirling snow which tore into the faces of the men on the bridge. It blotted out all sight of the rocks ahead. Spray mast high flung up against them by the destructive determination of the wind. She had had her brushes with the “subs”. Ships around her had been struck down. Some burst into flame. Some had cracked in two, clinging to the surface in desperation. Some had been bombed. And so, as sure as any torpedo the storm had her now. Just ahead round the point (Rubha nan Sassan) was safe anchorage. But she could never make it. The windswept her down against the shore. Frantically she blinked out her call for help on the Aldis lamp and pounded out on the wireless, then…. in a deafening crash of breaking waves and rending steel she was carried up and flung against the rocks.

Somehow the men clung to driftwood and to life for nearly an hour in bitterly freezing water. Some of them reached land, only to be dashed against the rocks. A few were washed up on the shore of a little bay. Miraculously, two of them were not injured at all and had the strength do drag others out of the surf onto land. Then they looked about for help. Bleak hills rose from the cliffs along the coast. Cheerless and forbidding, a more desolate place would have been hard to find.

From a naval base several miles away a rescue party struck out over the icy roads. From Equally far in the opposite direction WRNS ambulances set off. As it wound its treacherous way the road became narrower, clinging desperately to the hillside and seemed ready to plunge headlong into the sea. snow squalls swirled around them making it impossible to see more than a few yards ahead. The windshield wipers were useless. Somehow the women pressed on. A grim task awaited them. Slithering over the rocks on the beach it was impossible to tell an oil covered rock from an oil covered body. 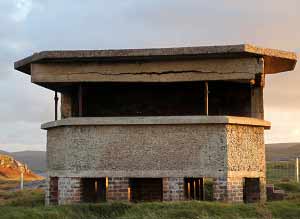 Old Mrs Mackenzie, in one of the cottages at the end of the road boiled up some tea, and putting it in her biggest jug she set off through the snow across three miles of rocks and peat bog to the shipwrecked survivors. When she had handed it out she trudged back again over the three miles to hear something up for the WRNS ambulance drivers.

Bringing back the stretcher cases was the worst job of all. It was difficult to keep a footing and the flashlights accentuated the rocks and hummocks. Lanterns flickering wildly in the wind threw weird shadows on the ground. The men fell repeatedly and the stretchers were jolted and tossed about. At the cottage Mrs Mackenzie took them in all frozen from the cold. And as far as her limited larder would allow she gave them some hot food and drink. Each time a survivor was brought in the WRNS drivers set out down the terrible road feeling that each time was their last.

For twenty-four hours after the ship had struck, 100 soldiers, sailors and civilians had managed by superhuman effort to bring back 12 of the 74 men alive that morning. The next day the storm raged on unabated and the rescue party started out again. Not with any hope of saving anybody but to bring back as many bodies as they could find. There was no reward for this cold day’s work. When dusk fell that day they rescue parties fell exhausted into bed and the hospital lights were turned out on a group of American sailors getting used to being alive once more.

Please visit the website for the planned Russian Arctic Convoy Museum where you will find information about the plans and the events leading up to the official opening of the museum in Aultbea. Visit www.russianarcticconvoymuseum.co.uk for more information.

Loch Ewe today
Nowadays Loch Ewe still has a naval presence, there is a NATO fuel station near Aultbea where naval vessels can refuel and in Mellon Charles is a small Navy depot. Most buildings that were used in WW2 are still present today. The most impressive site is north of Cove, at Rubha nan Sasan. Here are a lot of buildings overlooking the Minch and Loch Ewe including a memorial with the following inscription: “In memory of our shipmates who sailed from Loch Ewe during World War II. They lost their lives in the bitter arctic sea battles to north Russia and never returned to this tranquil anchorage. We will always remember them.” Other remains of the wartime military presence can be found near Tournaig Farm, in Aultbea and at the end of the road at Mellon Charles. The NATO is still using Loch Ewe as an exercise area, usually in spring and autumn. 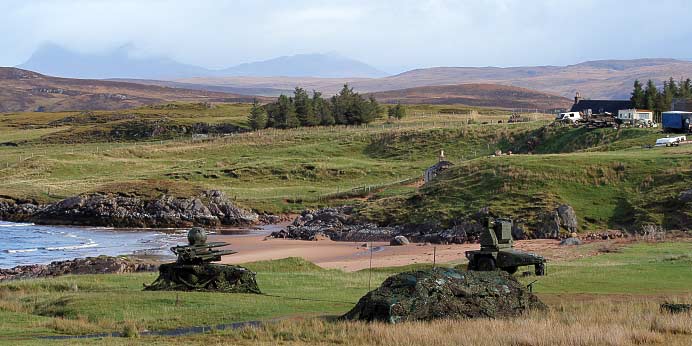 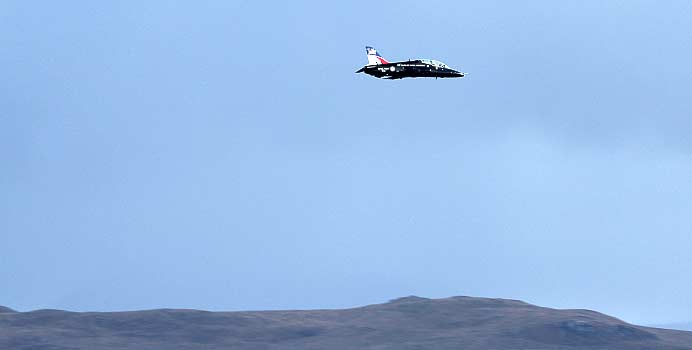