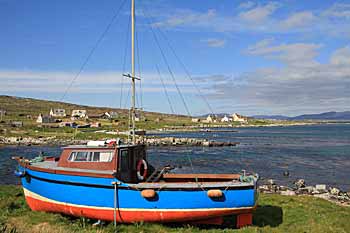 Peter Kerr, a historical researcher with a particular interest in the Isle of Harris has worked on the Berneray Historical Society’s most recent project, ‘A’ tilleadh ar n-eachdraidh dhachaigh’ (Bringing Our History Home) which has run for the last 18 months. Mr Kerr has written an account of the worldwide emigration of local people from the island, mainly in the mid-19th century.

Berneray is a small island in the Sound of Harris, between Harris to the north and North Uist to the south of the Western Isles. The island is joined to North Uist by a man-made causeway built in 1999, and also has a ferry connection to, and retains strong historical links with, Harris through both family connections and estate ownership.

A forty-page booklet is necessarily a condensed version of the stories of the large exodus of island families which took place during the 19th and early 20th centuries, with the earlier emigrations coming mainly after failures, as elsewhere in the Hebrides, of potato crops, kelp industries and reforms of land tenures. As also became a similar story on Islay and in areas of the Highlands and Islands, pressures on land resources were exacerbated by population rises due to various background causes such as “…the cessation of civil warfare after the 1745 rebellion, vaccination against smallpox, the spread of the potato as a human foodstuff that could be grown in very poor environmental conditions, supplementary income available from manufactures of kelp from seaweed, linen manufacture, fishing, whisky distilling…” (Storrie, ‘Islay: biography of an island’ 1981). It has been interesting to read that conditions leading up to emigrations of large proportions of the islands’ populations were so similar in both Berneray and Islay.

The book contains eleven clearly written chapters detailing events in the island of Berneray starting with the earliest Neolithic arrivals moving through to the present. Various listed data are accompanied by stories of human events and sketched illustrations. The book is attractively presented, readable and informative. While the writing is without excess sentiment, tales of tacksmen’s and landlords’ treatment of the local people make for sometimes painful reading, and copies in the booklet of letters both to and from Berneray emigrants give a moving testimony of the island people’s efforts to make new lives in strange lands. There are two appendices where emigrations are detailed, and a thorough bibliography of historical sources used.