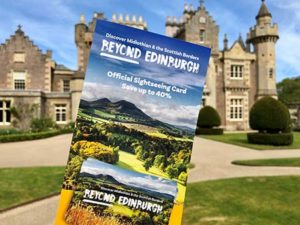 Edinburgh is a fantastic city and draws visitor from all over the world to the beautiful centre and many attractions. But Edinburgh can be busy at times so an escape to the beautiful countryside gives your city visit an entirely different twist. From the busy Royal Mile to the peace and quiet of Scott's View in the Scottish Borders or the nearby Border Abbeys is merely an hour away. Since May this year this has become much easier and now you can "see more and save more" with the Midlothian and the Scottish Borders one or two day sightseeing pass. Jump in the car or take the train or bus … END_OF_DOCUMENT_TOKEN_TO_BE_REPLACED

There is something about Dryburgh Abbey in the Scottish Borders, is it the walk towards the Abbey with the majestic trees in the park or just the serene and peaceful feeling one gets when walking over the grounds of the Abbey? Perhaps the ruins of Dryburgh Abbey are not as majestic as the neighbouring Melrose Abbey or Jedburgh Abbey but Dryburgh is even more so a place where the medieval monks lived a contemplative life, perhaps it's that atmosphere one feels when walking towards the Abbey. The ruins stand amidst a wooded seclusion beside the River Tweed. Dryburgh became the premier house in … END_OF_DOCUMENT_TOKEN_TO_BE_REPLACED

This year the weather has been off track for some strange reason, climate change perhaps or is it just the usual Scottish Climate? I read somewhere that Scotland had two summers this year, one week in April and one week in September. I was sort of lucky to witness both tail ends of these warm and sunny episodes but I was also unfortunate enough to witness the down side, howling gales, pissing rain and generally dreich weather. Dreich weather refers to wet, dull, gloomy, dismal, dreary, miserable or any combination of these. While we were on Islay in May for three weeks, this second Scotland … END_OF_DOCUMENT_TOKEN_TO_BE_REPLACED

Sir Walter Scott, poet and novelist, was born in Edinburgh, Scotland, five years before the Declaration of Independence in America. Unlike most little Scotch boys, he was not sturdy and robust, and in his second year, a lameness appeared that never entirely left him. Being frail and delicate, he received the most tender care from parents and grandparents. Five consecutive years of his life, from the age of three to the age of eight, were spent on his grandfather's farm at Sandyknow. At the end of this period, he returned to Edinburgh greatly improved in health, and soon after, entered the high … END_OF_DOCUMENT_TOKEN_TO_BE_REPLACED

Scotland boasts some of the most wonderful (Botanic) gardens in Britain and the gardens from the National Botanic Gardens of Scotland belong to the oldest and most beautiful in the world, and also contain one of the richest plant collections. Their gardens are located in Edinburgh, Benmore, Logan and Dawyck. Dawyck Botanic Garden is located in the Scottish Borders on the B712, only eight miles southwest of Peebles. This botanic garden is more than 300 years old and boasts some of the tallest trees in Britain, as well as exotic conifers. Located in a picturesque glen Dawyck is a trully … END_OF_DOCUMENT_TOKEN_TO_BE_REPLACED