Loch Awe and Kilchurn Castle I hate to start this article with an obvious Cliché but the word most used by visitors to describe their time by Loch Awe in Argyll is “Awesome” and however cheesy it sounds it pretty much hits the nail on the head. The facts speak for themselves; at 28 miles in length it is the longest fresh water loch (or lake) in the UK, it holds the current record for the largest Brown Trout caught in the British Isles and has, Kilchurn Castle, arguably Scotland’s most impressive & Iconic ancient building and ancestral home of clan Campbell, at its … END_OF_DOCUMENT_TOKEN_TO_BE_REPLACED 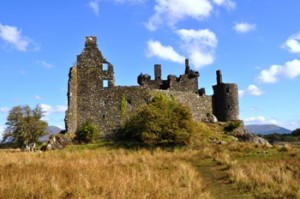 Legend has it that Loch awe, at over twenty five miles in length, the longest stretch of freshwater in Scotland, was created by a witch and lived in by an evil monster even more fearsome than the one at loch Ness. Dotted around the north of the loch, where it is joined by the A819 from Inveraray to Oban, are several tiny islands which now sport picturesque ruins, on Inishail you can see a crumbling thirteenth century chapel which once served as a burial ground for the McArthur clan,, the ruined castle on the Fraoch Eilean dates from the same period. Before moving to Inveraray in 1746, … END_OF_DOCUMENT_TOKEN_TO_BE_REPLACED