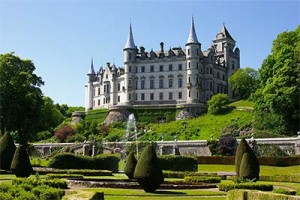 The History of Dunrobin Castle Since the 13th century, the stunning Dunrobin Castle  has played host to the many Earls and Dukes of Sutherland, before being called home by a family in 1401. The Sutherland Earldom is typically regarded as one of the most powerful in Britain, and was established in 1235. It is thought the castle was built specifically for the Earldom in the same year, and was given the name Dun Robin which means Robin’s Hill or Fort in Gaelic. The initial castle was a fortified, square keep, with six-feet thick walls and vaulted ceiling, with a view from a cliff-top … END_OF_DOCUMENT_TOKEN_TO_BE_REPLACED