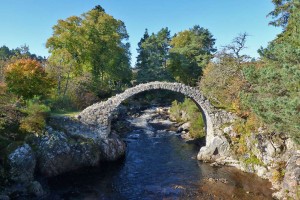 The old packhorse bridge in Carrbridge in the Cairngorms National Park is the oldest stone bridge in the Highlands. The plaque near the viewpoint reads as follows: "At the beginning of the eighteenth century, to the inconvenience of both travellers and local people, there was no point at which the River Dulnain could be crossed when it was in spate, and burials at the Church of Duthil were often delayed. Brigadier-General Alexander Grant of Grant, Clan Chief, commissioned John Niccelsone, a mason from Ballindaloch, to build a bridge at Lynne of Dalrachney. Built between May and November … END_OF_DOCUMENT_TOKEN_TO_BE_REPLACED

Reindeer were re-introduced to Scotland in the Cairngorm Mountains in 1952 by a Swedish Sámi by the name of Michal Utsi. The Cairngorm Reindeer are the UK’s only free-ranging herd, and they roam the slopes of some of Scotland’s highest peaks, feeding on the only sub-arctic territory in the UK. As a herder it was my job to ‘roam’ out and locate them throughout the year. These reindeer are still managed today in much the same way as they were when Mr Utsi brought them here. They spend almost their entire life on the mountains with minimal fuss needed from the herders. The herders know each … END_OF_DOCUMENT_TOKEN_TO_BE_REPLACED