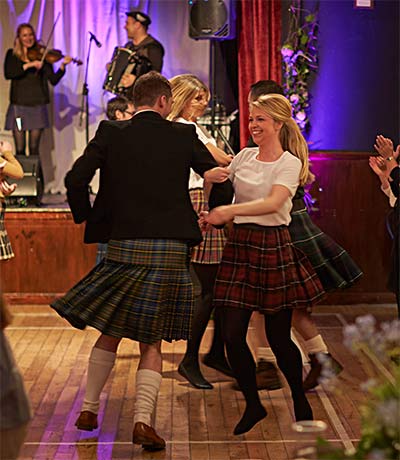 When you’re in Scotland long enough you’ll sooner or later get to know the word Ceilidh, pronounced as kay-lee. Ceilidh is a gaelic word meaning gathering or party. Donald Mackenzie wrote in 1917 in his book Wonder tales from Scottish myth and legend about the Ceilidh: “On long, dark winter nights it is still the custom in small villages for friends to collect in a house and hold what they call a ceilidh. Young and old are entertained by the reciters of old poems and legendary stories which deal with ancient beliefs, the doings of traditional heroes and heroines, and so on. Some sing old and new songs set to old music or new music composed in the manner of the old.”

Nowadays Ceilidhs are still held but they differ from those of the olden days where there was no radio or television. They feature Scottish folk music and dance and are sometimes held on special occasions, such as weddings. They are also held on regular basis in village halls throughout Scotland, a bit more in the west than in the east, and in the more traditional hotels to entertain the guest. A Ceilidh can be great fun and the better you are prepared the more enjoyable it is. As a ceilidh is about traditional Scottish Music and dancing you might want to learn more about some of the traditional dances before you visit a ceilidh. Below are three popular dances and each of them has a link to a website where you can learn the steps and see the actual dance. Here we go:

The Gay Gordon is traditionally the first dance of the evening. This dance is over 130 years old, and was named after a famous army regiment from the North East of Scotland called the Gordon Highlanders. It is usually danced to a march like ‘Scotland the Brave’ or the tune ‘The Gordon Highlanders’. Link to video and steps

This is a group dance so you’ll need to gather in groups of three. It’s a reel, and it’s a very sociable dance, changing partners every so often, meaning your group of three will get the chance to dance with lots of different people. It dates back around 150 years, having first become popular in the mid 19th century. You might find that different villages or different areas of the country have slightly different versions, especially in the reeling part, but it doesn’t matter which version you do. It will work. The Dashing White Sergeant tune was composed by Sir Henry Rowley Bishop with words by General John Burgoyne. Link to video and steps

When and Where are Ceilidhs being Held?

Ceilidhs are held throughout Scotland in all seasons. You can find them in village halls and other venues and sometimes hotels organise Ceilidhs in the tourist season. It’s difficult to point out precisely when and where you can visit a Ceilidhs in Scotland. Below are a few useful tips:

For Ceilidhs in Edinburgh try www.edinburghceilidhclub.com/ and www.ghillie-dhu.co.uk/ceilidhs/. Sloans in Glasgow have a Ceilidh every Friday night, for more info visit www.sloansglasgow.com/ceilidh/. For listings nationwide try this link.

There are probably as many Ceilidh bands in Scotland as there are village halls, and likely even more. However, for me there is one band that stand out and who have their own Ceilidh House in Oban in the West of Scotland, they are Skipinnish. I have included a video below filmed during a Ceilidh in Oban. You can see some of the dances and you can see Skipinnish perform. A most enjoyable video.