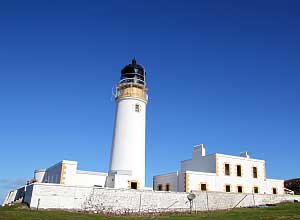 Standing 25 meters high Rubh Re (Gaelic for Rubha Reidh) was designed and built by David A Stevenson in 1912 to mark the entrance to Loch Ewe in Wester Ross at a cost of £14,900.

In 1944, an American Liberty Ship, the “William H. Welch”, missed the entrance to Loch Ewe and went ashore at Black Bay during a severe storm. Two Lightkeepers from Rubha Reidh were actively involved in the rescue of 15 survivors out of a group of 74.

A principal lightkeeper and two assistants, with their families, lived at Rubhe Re until the light became automated in 1986. Light keeping was a remote, lonely and hard existence. At night each keeper was required to keep a watch in the lightroom to ensure that the light flashed correctly to character. during daytime keepers were engaged in cleaning, painting if necessary, and generally keeping the premises clean and tidy.

The original lens at Rubh Re was a Fresnel Lens, so named after its French inventor Augustin Fresnel. The lens was made from a series of perfectly polished crystal glass lenses set into a brass structure. The lens was removed in 1985 prior to the automation of the station and can now we seen in the Gairloch Heritage Museum along with the foghorn, which was removed in 1980.

The lens was replaced with an array of sealed-beam electric lamps. When daylight falls and rises between set levels a light sensor automatically switches the bank of lights on and off. The light is monitored from the Northern Lighthouse Board’s headquarters in Edinburgh. Following the automation of the station the cottages were sold and are now privately owned.

A track going east from the lighthouse leads to the Lighthouse Jetty which was built in 1910 to bring in materials and the workforce for building the Lighthouse. Access by sea was the main way of supplying the lighthouse until the late 1950’s when road was built. Boats also brought in the coal for the keepers accommodation which was completely heated by open fires.

All the supplies were offloaded from the boats using a hand crane which was removed in the 1970’s. Then a 78 gauge railway was used to carry supplies from the jetty to the lighthouse. It was winched up the ramp by an ACE friction winch using an 8mm cable, 5-7cwt capacity powered by a single cylinder diesel engine. It was then pushed by the keepers on the tracks to the house. The parrafin for the lighthouse was transported through a pipeline from a tank at the jetty.

The Stevenson Engineers
For over one hundred and fifty years Robert Stevenson and his descendants designed most of Scotland’s Lighthouses. Battling against the odds and the elements the Stevensons constructed wonders of engineering that have withstood the test of time – an amazing historical achievement.

The Lighthouse is located 13 miles from Gairloch at the end of a long and winding single track road.

Rubha Reidh Lighthouse from the Sea Side 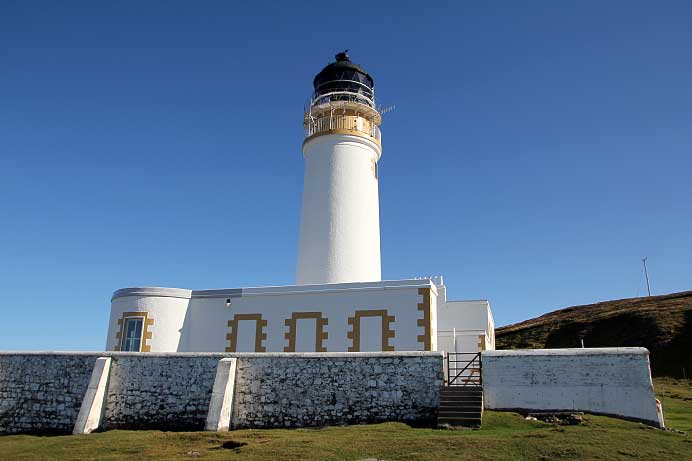 Another view of Rubha Reidh Lighthouse from the Sea Side