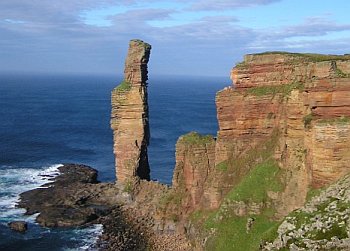 The Orkney Islands in the north of Scotland consists of about 20 inhabited islands plus 50 others, some quite small, and is 16 km (aprox. 10 miles) north of Caithness in northern mainland Scotland. The largest island in the group is known as the Mainland and has an area of 202 square miles, making it the sixth largest Scottish island and the ninth largest island surrounding Great Britain. An older name for the Mainland is Hrossey (Horse-island). Other islands can be classified as north or south of the Mainland. The islands north of the Mainland are known collectively as the North Isles, those to the south as the South Isles. All the islands together are 990 square kilometres and the total population is around is 19,500.

The rapid spread of Neolithic culture up the western seaways brought early Megalithic culture and farming settlements such as Knap of Howar from 3500 BC and the slightly later village at Skara Brae. Numerous chambered cairns include the magnificent Maeshowe passage grave, near the Ring of Brodgar and other standing stones. The Iron age inhabitants were Picts, evidence of whose occupation still exists in “weems” or underground houses, and “brochs” or round towers. Vikings having made the islands the headquarters of their expeditions against Norway and the Scottish Islands. Harold Hårfagre (“Fair Hair”) subdued the rovers in 875 and annexed both Orkney and Shetland to Norway. The martyrdom of Earl Magnus resulted in the building of St Magnus Cathedral, Kirkwall. The islands remained under the rule of Norse earls until 1231.

In 1564, Lord Robert Stewart was made sheriff of Orkney and Shetland, and received possession of the estates of the udallers; in 1581, he was created earl of Orkney by James VI of Scotland. The islands were the rendezvous of Montrose’s expedition in 1650 which culminated in his imprisonment and death. During the Protectorate, they were visited by a detachment of Cromwell’s troops, who initiated the inhabitants into various industrial arts and new methods of agriculture. In 1707, the islands were granted to the earl of Morton in mortgage but in 1766, his estates were sold to Sir Lawrence Dundas, ancestor of the Earls of Zetland. During World War I and World War II, the Royal Navy had a major base at Scapa Flow. The base was closed in 1956. In the Arthurian legend, Orkney is the home to King Lot, Sir Gareth, Sir Gaheris, Sir Gawaine and Sir Agravain.

Located in West Mainland is the ‘Heart of Neolithic Orkney’, a designated UNESCO World Heritage Site. This comprises a group of Neolithic monuments which consist of a large chambered tomb (Maes Howe), two ceremonial stone circles (the Stones of Stenness and the Ring of Brodgar) and a settlement (Skara Brae), together with a number of unexcavated burial, ceremonial and settlement sites. The group constitutes a major prehistoric cultural landscape which gives a graphic depiction of life in this remote archipelago in the far north of Scotland some 5,000 years ago.

Kirkwall is the largest town and capital of the Orkney Islands. The town is first mentioned in the Orkneyinga saga in the year 1046. In 1486 King James III of Scotland elevated Kirkwall to the status of a Royal Burgh, as is shown by the road signs as you enter Kirkwall, ‘The City and Royal Burgh of Kirkwall’. The name Kirkwall is derived from the Norse name ‘Kirkjuvagr’, or ‘church bay’. This was later corrupted to ‘Kirkvoe’ and then ‘Kirkwaa’. English cartographers mistook the latter part ‘waa’ as the Scots wa meaning wall, hence the town became ‘Kirkwall’.

Kirkwall has a port with ferry services to Aberdeen and Lerwick, as well as the principal north islands in the group. Kirkwall is a small town, with a population of about 8,500. At the heart of the town stands St Magnus Cathedral. It was founded in memory of Saint Magnus Erlendsson, Earl of Orkney 1108-1117 by Earl Rögnvald Kali. Next to the Cathedral are the ruins of the former Bishop’s Palace and Earl’s Palace. The town has two museums: Tankerness House Museum, which is contained within one of Scotland’s best-preserved sixteenth century town-houses, contains items of local historical interest. The prehistoric, Pictish and Viking collections are of international importance. The other museum is the small ‘Wireless Museum’, dealing with the history of radio and recorded sound.

Kirkwall is one of the most attractive and well-preserved small towns in Scotland. Apart from the main historical buildings, there are many 17th-18th century houses and other structures in the local vernacular style. On the west edge of the town, surrounded by Hatston Industrial Estate, is a prehistoric ancient monument, Grain Earth House (Historic Scotland), a short low stone-walled passage deep underground leading to a small pillared chamber. This is the form of earth house or souterrain characteristic of the Northern Isles (though Grain is unusually deep below ground). One of the main annual events in the town is the Ba Game, held each Christmas Day and New Year’s Day between the Uppies and the Doonies; each team representing one half of the town. 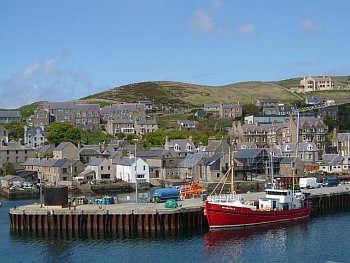 Stromness is the second-largest town in the Orkney Islands, and is located in the south west of the mainland of Orkney. A long-established seaport, it has a population of approximately 2,200 residents. The old town is clustered along the main street, flanked with houses and shops built from local stone, with narrow lanes and alleys branching off it. There is a ferry link from Stromness to Scrabster on the north coast of mainland Scotland. Stromness became important during the late 17th century, when England was at war with France and shipping was forced to avoid the English Channel. Ships of the Hudson’s Bay Company were regular visitors, as were whaling fleets. Stromness Museum reflects these aspects of the town’s history.

St Margaret’s Hope, known locally as The Hope is Orkney’s third largest settlement, after Kirkwall and Stromness. It has a population of about 550, and is situated at the head of a sheltered bay at the north end of South Ronaldsay, off Water Sound. It is South Ronaldsay’s main village, and is named after Margaret of Norway who died there. The village has a primary school, a small blacksmith’s museum, a number of shops and restaurants including the noteworthy Creel Inn. A ferry service runs to Gills Bay on the Scottish mainland three times daily, with an average time of an hour one-way.

Hoy is the second largest of the Orkney Islands after the Mainland. The dramatic coastline of Hoy is what usually greets visitors travelling to the Orkney Islands by ferry from the Scottish mainland. It has extremes of many kinds: some of the highest cliffs in the UK at St John’s Head; the impressive and famous sea stack, the Old Man of Hoy; some of the most northerly surviving natural woodland in the British Isles; the remote possibility that Arctic Char survive in Heldale Water and the most northerly Martello Towers, which were built to defend the area during the Napoleonic War, but were never used in combat. The highest point in Orkney, Ward Hill, is found on Hoy.

The Orkneys are home to two Whisky Distilleries. The Highland Park Distillery is the northernmost Scotch Whisky distillery in the world. Tours are available all year round. Check on their website for exact opening times. You can contact them by Tel:+44(0) 1856 874619 or email: [email protected]

The orkneys can be reached by ferry through the following routes:
Lerwick Shetlands to Kirkwall
Aberdeen to Kirkwall
Scrabster (Thurso) to Stromness
John O’Groats to Burwick, South Ronaldsay
Gills Bay to St Margaret’s Hope

Most of the larger islands have their own airfield. Loganair operates regular services to six islands from Kirkwall.