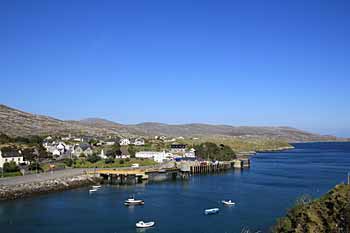 The first legal whisky made on the Isle of Harris is on course to be produced next year. The Isle of Harris Distillery which is to be built at Tarbert has been awarded £1.9 million from the Food Processing, Marketing and Co-operation grant scheme – one of five businesses to share £2.391 million in this round. A further three firms received £241,000 through the Marketing Development grant scheme. Work is due to begin on the distillery, which is expected to create around 20 jobs, by the end of this year. It will be built between a Harris Tweed craft workshop and the MV Hebrides ferry berth, to create the “super premium” single malt called Hearach – the Gaelic term for a native resident of Harris. Between 200,000 to 300,000 bottles could be produced annually using water tumbling down the nearby rocky hillside between two reservoirs on the East Tarbert burn. Exports for the mature malt will target Japan and the USA. Around £10 million is required to build the distillery and underwrite running costs until whisky sales take off. Investors are expected to be offered the use of a flat within the building where they can watch the whisky being manufactured through an internal window as well as a view to the village. Western Isles Council has yet to decide on planning permission.

Storm whipped waves risk flooding the low-lying reclaimed shore land site so the ground around the distillery will be heightened. The firm’s chairman is Anderson Bakewell who lives in Oxford. He says he wants to create a “single malt whisky intended to be of outstanding quality and highly valued by connoisseurs.’’ If the cash is raised building work may start this year with the first casks of whisky being filled by the end of 2014. Unlike some larger distilleries, it intends to mature and bottle the whisky on the island rather than ship it out to mainland bases for the finishing process, in a bid to create extra employment on Harris.

It includes a bottling hall, bonded warehouse, service yard and car parking. Tourists would be offered tours around the stills and an exhibition about the process would be displayed in the associated visitor centre. Initially barley would be imported from the mainland but there are also plans to “create close ties with crofters through a not-for-profit entity, the Harris Maltings, to encourage the growing of suitable strains of barley and offering a ready local market for the crop.” The distillers envision a “long-term project that is both beneficial to the local community and a source of pride for the people of the islands.” The company said: “The project is inspired by the environment, heritage and culture of the Isle of Harris, the rising global demand for whisky and the hearty welcome of a community in acute need of economic regeneration.’’