Although the whisky region of Speyside is part of the Moray council area, most folk will be more familiar with the name Speyside than Moray. Moray lies in the north-east of Scotland, with its coastline on the Moray Firth, and borders the council areas of Aberdeenshire and Highland (Inverness-shire). The southern area lies in the heart of the Cairngorm Mountains, the largest mountain range in the UK, home to unique wildlife, and offering ski facilities in the winter. It’s in big contrast with the northern part of this county where you can find miles and miles of beautiful beaches and Dolphins playing in the sea. Dotted around this beautiful council are many (ruins of) castles and even more whisky distilleries.

One of Scotland’s longest rivers, the Spey, crosses the county of Moray. The River Spey is probably the most famous salmon river in the World. The River Spey has its origin in the Monadhliath mountains to the east of Loch Ness and flows 100 miles northwards to enter the Moray Firth at Spey bay. In its lower course, downstream of Grantown, it is a fast flowing river, providing miles of perfect, and highly sought after, fly fishing water. 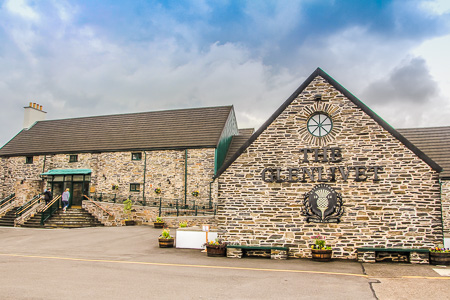 The clear water of the River Spey has attracted many whisky distilleries and thus created one of the most important whisky regions in Scotland called Speyside. Speyside Single Malts are single malt Scotch whiskies, distilled in Strathspey, the area around the River Spey in Moray and Badenoch and Strathspey, in northeastern Scotland. The two best-selling single malt whiskies in the world, The Glenlivet & Glenfiddich, come from Speyside. Strathspey has the greatest number of distilleries of any of the whisky producing areas of Scotland.

Follow the world-famous Malt Whisky Trail through Speyside to visit working distilleries, including a fascinating cooperage and a historic distillery. From Benromach to Dallas Dhu, a perfect time capsule of whisky-making; from Glen Moray to Strathisla, home and heart of Chivas Regal; from the Glen Grant distillery to the Speyside Cooperage where real coopers work with incredible speed and skill; from Glenfiddich to The Glenlivet and the Cardhu distillery, Scotland’s whisky trail signposts lead you through the picturesque lush countryside of Speyside, the world’s favourite malt whisky region.

Elgin is the largest town in Moray and administrative capital. This attractive town with its many beautiful buildings such as the Cathedral, although ruined, is home to a famous shop in South Street where you find Gordon and MacPhail’s shop. Founded in 1895 Gordon and MacPhail’s production of independent bottlings is well known amongst the many whisky enthusiasts. On the edge of Elgin is Glen Moray Distillery with its excellent visitor centre.

Lossiemouth is situated on the Moray Firth and has miles of beautiful beaches backed by wonderful dunes. It’s an ideal location for beach walks and to get away from it all. The town has a lovely tranquil atmosphere and is well equipped for golf lovers with the Moray Golf Club directly to the west. The Moray Forth has a resident population of Dolphins and boat trips from the harbour can take you out dolphin spotting.

Dufftown, at the foot of the Conval Hills, is a thriving Highland market town and is often referred to as the “Scottish malt whisky capital of the world”. There are six distilleries surrounding the village, the largest being Glenfiddich, named after the nearby river Fiddich. The others are Dufftown, Mortlach, Glendullan, Balvenie and Kininvie distillery. Dufftown is in the heart of the Speyside whisky trail and it’s the largest exporter of whisky in Scotland. The Dufftown Clock Tower is the focal point of the town square, built in 1839, and now acts as Tourist Information Centre.

Tomintoul and The Glenlivet Estate

If you like rolling hills, wonderful scenery and great walks a visit to The Glenlivet Estate should be on your list. The 58.000 acres Crown Estate is located in the south of Moray and is part of the Cairngorms National Park. Late summer/early autumn is a great time to visit as the hills turn purple when the Heather is in bloom. In nearby Tomintoul is a visitor centre, open all year from Mon – Fri, 9am -5pm, which provides more information. www.glenlivetestate.co.uk

Ballindalloch Castle can be found In the southern half of Moray, 14 miles east from Grantown on Spey, and is often referred to as the Pearl of the North. Ballindalloch is one of the most beautiful and renowned castles in Scotland and located in the heart of Speyside, near to the famed local whisky distilleries of Cragganmore, Glenlivet, Glenfarclas and Glenfiddich. Surrounded by majestic hills, and with the tumbling waters of the Rivers Spey and Avon flowing through the grounds, the setting is truly magnificent. The Macpherson-Grants have resided here since 1546 and they have opened their castle for visitors. The interior is one of the most beautiful I have seen and this castle is well worth a visit.

Themed on Whisky, Food, Music and the Heritage & Culture of Speyside, the Festival offers a wide array of quality events held annually in April. www.spiritofspeyside.com