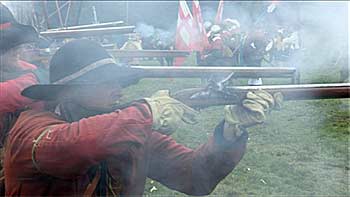 The film, Scotland’s Greatest Warrior (Friday November 30th on BBC2) reveals how the Marquis of Montrose, a military genius, led an outnumbered army to victory in six successive battles during the civil wars of the 17th century. Some call him the greatest general that Scotland has ever produced and General Montgomery, commander of the D-Day land forces in 1944, quoted Montrose’s poetry to his men on the eve of the Normandy landings:

He either fears his fate too much
Or his deserts are small
That puts it not unto the touch
To win or lose it all.

As the King Charles 1st’s General in Scotland, Montrose led a series of extraordinary forced marches – two through Highland winters – to win brilliant victories at Tibbermore, Aberdeen, Inverlochy, Auldearn, Alford and Kilsyth – and all in a single year. He also sacked the Campbell stronghold of Inverary, causing the Covenanting Marquis of Argyll to flee in his galley.

Montrose’s ally was Colonsay born Alasdair MacColla, a MacDonald obsessed with wresting Islay and Kintyre back from Campbell control. Together Montrose and MacColla turned a ragtag band of Irish, Highland and Lowland men into a devastating army. They invented the ferocious ‘Highland charge’ – a tactic used effectively for a century right up to the Battle of Culloden a century later.

To Covenanters, Montrose became a pariah who unleashed MacColla’s bloodthirsty Highlanders on the raw recruits of the Scottish parliament, nurtured sectarian hatred between Protestant and Catholic, and created a great divide between Highland and Lowland Scotland. To Royalists, he was a military genius who could save the King from the Parliamentary army in England.

A brilliant young man. A glittering career. An epic adventure. And yet this story is a tragedy. Montrose was finally defeated, betrayed, condemned as a traitor and publicly hanged, his body decapitated and his limbs severed. He was a man who dared to win – and lost it all. On the 400th anniversary of Montrose’s birth, historian Professor Ted Cowan reveals the life of this extraordinary Scot. Among the experts he meets are former war correspondent, Max Hastings, and battlefield archaeologist, Tony Pollard.

The programme makes extensive use of CGI and re-enactment to illustrate the tactics and brutality of 17th century warfare. It also follows modern Highland soldiers as they re-enact one of Montrose great winter marches through Argyll as a gruelling modern training exercise.

The programme was produced by the Glasgow/Islay based production company, Caledonia TV.