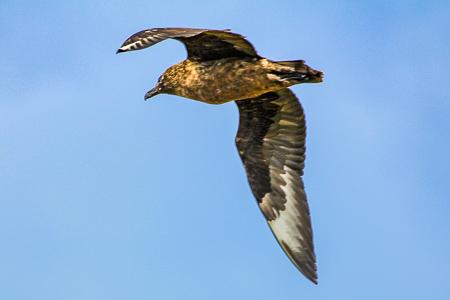 One of the lesser known, now unpopulated, Inner Hebridean Islands of Scotland is the Isle of Handa. It can be found in the north-west of Scotland, a few miles north of Scourie and 25 miles south of Durness. The name Handa origins from Norse and Gaelic and means “island at the sandy river”. Handa currently has no human population but records show that 65 people inhabited the island in 1841 before potato famine forced the islanders away, they were moved across the Atlantic to Nova Scotia. Wikipedia writes that “The islanders had a parliament, similar to that of St Kilda, which met daily, and the oldest widow on the island was considered its “Queen” Anciently the island was used as a burial place, and there are still the remains of a chapel in the south east, commemorated in the name Tràigh an Teampaill (Beach of the Temple).”

Handa and the Seabirds

The Isle of Handa is internationally important for seabirds and is therefore a true paradise for bird lovers and other nature friends. From the high cliffs you can admire spectacular scenery and live seabird colonies. Depending on the season, birds such as puffins, arctic skuas, skuas, fulmars, red grouse, razorbills and guillemots can be found on the island or flying around the cliffs and sea stack. From the high cliffs, up to 120 metres, Dolphins, Seals and even Whales can be spotted. Best times to visit for breeding seabirds is April to July and Mid-May to July to see the Puffins.

The Isle of Handa is owned by the Scourie Estate and managed in partnership with the Scottish Wildlife Trust, a charity dedicated to conserving the wildlife and natural environment of Scotland. The Scottish Wildlife Trust acquired its first wildlife reserve in 1966 and now has more than 120 reserves throughout Scotland and well over 35,000 members. A downloadable leaflet is available via this link

How to get to Handa?

In order to get to Handa you need to take a wee ferry from Tarbet, accessible through a 2.6 mile single track road from the main road, the A894. This road is unsuitable for caravans and parking can be difficult at busy times. The wee passenger ferry from Tarbet sails every 20 minutes, weather permitting, from Monday to Saturday between 9am and 2pm. Costs for adults are £15 and children £5, under 5 are free. More info on ferry times etc via www.handa-ferry.com.