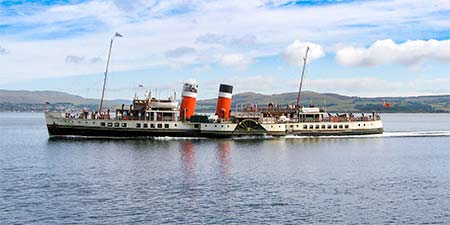 Paddle Steamer Waverley is the last seagoing passenger-carrying paddle steamer in the world. She was built in 1946 and was named after Sir Walter Scott’s first novel. She replaced a PS Waverley which was built in 1899 which was sunk in 1940.

The ship was bought from Calmac in 1973, after serving the Firth of Clyde for many years, by the Paddle Steamer Preservation Society (PSPS) who restored the ship to her former glory and is now in use as a Passenger Excursion ship around the British coast. She sails from ports such as Glasgow, at the Science Centre, Bristol, the Thames, Liverpool and the English south coast. Sailing on the PS Waverly is very popular and thousands embark annually for a nostalgic sea faring trip.

This winter however things took a turn for the worst. Work on the ship’s boilers has been ongoing since February and following extensive consultation and investigation it has been concluded that the boilers must be replaced if Waverley is to have a future and sail in 2020. This means that Paddle Steamer Waverley has regrettably been withdrawn from service and will not operate any of her sailing programme for the first time in 45 years.

The PS Waverly website says: “As part of the winter maintenance programme we have been undertaking boiler works since February. Unfortunately, after extensive consultation and investigation it is now conclusive that the ship’s boilers require replacement.

We immediately face a significant challenge to raise the required funds to reboiler Waverley and return her to service. Waverley is owned by a Registered Charity which will shortly be launching an appeal to ‘Save the Waverley’ and ensure she sails in 2020. We fully appreciate any support at this time to help return Waverley to steam.”

Make a Donation to help the Waverley

If you’d like to support the boiler replacements you can make a donation by visiting www.waverleyexcursions.co.uk or calling 0141 243 2224 or by texting STEAM followed by your chosen amount to 70085.