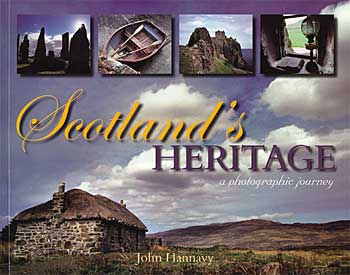 Brian Palmer, a friend from Islay, wrote a book review about Scotland’s Heritage: Scotland is justly renowned for its scenery: mountains, valleys and the occasional river running through it. The Clearances and its often violent past have left a legacy of ruined homes, villages and castles while its traditional industries often continue to leave their mark upon the landscape. All in all, a veritable gift shop for the photographer. If you add in some wild variations in weather and climate, it is little wonder that folks travel from across the world to marvel at it for themselves.

John Hannavy is not only a reputable photographer, but one who knows many of the intricacies of his art as a Fellow of both the British Institute of Professional Photography and the Royal Photographic Society, as well as a recognised historian of the subject. However, qualifications are only a part of the equation; the proof ought to lie in the quality of his observations and subsequent imagery of which there is a considerable amount in this 192 page book.

To be parochial and partial for a moment, there is a question raised in relation to Islay by way of the contents of this volume. Though perhaps all too obviously the Kildalton Cross takes its deserved place in the chapter entitled ‘The Marks left by Men’, none of the island’s distilleries feature in the ‘One Thousand Years of Industry’ chapter (though other distilleries do). It seems strange to have come all this way to photograph the cross, passing three distilleries on the way, yet exclude them from the final copy.

That aside, almost every aspect of Scotland’s past and present is covered in some way or other within John Hannavy’s extensive travels. I do fear, however, that the book’s layout does not serve him as well as could have been possible. Several photographs of note have the audience distracted by arbitrarily imposing a second smaller image on top. The extensive use of a script typeface for cover notes and chapter headings is also slightly incongruous.

Scotland’s Heritage is most definitely a book for the ‘visual tourist’; well captioned, accompanied by a comprehensive narrative and copiously indexed at the back. It is not, however, the book to acquire if it is more the art of photography that you seek. Though the images are of high quality and particularly well reproduced, there is a certain ‘shortbread tin’ theme that runs throughout. It may well appeal, however, to those who have been introduced to Scotland by way of Disney Pixar’s ‘Brave’. These images provide a conventional way of perceiving Scotland, and though I fear this may be seen as a criticism of Mr Hannavy’s art, it is in point, a simple statement of fact. It could, of course, be simply that I have become blasé about my surroundings.

Scotland’s Heritage: A Photographic Journey is published in soft back by Whittles Publishing at a cost of £18.99