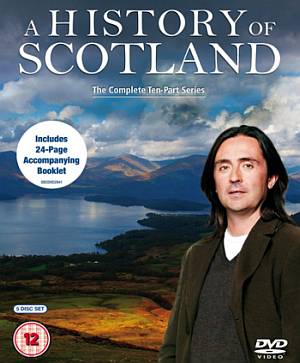 You probably know Neil Oliver from the very successful BBC series Coast. Fortunately Neil didn’t stop there and since he is from Scotland who could better tell and show you all about the very rich history of Scotland? In ten thought-provoking, episodes Neil Oliver brings a fresh perspective to Scotland’s past and challenges many of the perceived notions of Scottish history. With stunning, BAFTA-winning cinematography and mesmerising narrative the series tells of battles and allegiances, political intrigue and religious conflict. This is one of the best Scotland DVD’s if you ask me.

The series charts the journey from the diverse tribes’ first stirrings of identity around 2,000 years ago through to devolution and the reopening of the Scottish Parliament. It reveals the fascinating struggles, power brokers, incidents and characters across the years from William Wallace, Robert the Bruce and Sir Walter Scott to the Highland-lowland rivalry, the Covenanters, the Darien disaster and the tobacco lords. Using the very latest in historical research, A History of Scotland is a sweeping and insightful chronicle of an often turbulent, but continuingly fascinating, nation.

A wee review: “Neil Oliver’s History of Scotland was absolutely enthralling and interesting from beginning to end. Visually, the series is stunning with wonderful landscapes, cities and historic buildings.The music perfectly complements and enhances the whole- and unlike many modern documentary series, the music did not drown out the narration. The dramatisations were not intrusive but added to the visualisation of the people and the periods. Neil Oliver clearly explains a long and complex social, cultural and political history and his constant appearances are not intrusive but add to the intensity of the story. His quirky little asides add a lovely element of Scottishness.”