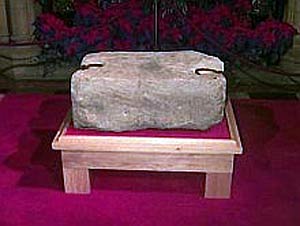 This is the legend of one of the greatest artifacts of all time. The Stone of Scone also referred to as The Stone of Destiny or the Coronation Stone on which Kings and Queens of Ireland,Scotland and England have been crowned for century after century.. The stone itself is a 336 lb. chunk of yellow sandstone.

The stone goes back to Old testament times when according to the legend Jacob used the stone as a pillow when he saw the ladder going into heaven as told in Genesis 28:10-22. During his dream Angels made prophecies to Jacob and when he awoke he used the stone to build a pillar after annointing it with oil and calling the place where he had slept Bethel.

Later the stone was taken to Ireland around 400AD by Princess Tea where it was renamed Lia-Fail. The hill Tara was named for Princess Tea. Kings of Ireland were crowned upon the stone until the time that Fergus MacEarca took it to Scotland in 843AD first to Scone and it stayed for a time in Iona and many a Scottish king was crowned upon it until King Alexander in the 13th century about 600 years.

The stone was taken from Scotland by King Edward the First in 1296AD and was kept in Westminster Abbey until 1996AD when it was returned back to Scotland. The stone now sits in Edinburgh Castle but must be returned to Westminster for the crowning of the next coronation. The year after the stone was returned the Scots voted to have their own parliament and be an almost independent nation once again.