The Enchanted Forest, a light and sound show in the midst of stunning woodland surrounding a loch, is held annually in the Perthshire woods near the lovely village of Pitlochry. Now in its 18th year, The Enchanted Forest has won numerous awards, most recently being named finalist for Best Cultural Event at the Scottish Thistle Awards. The show has been captivating audiences since 2002 and attracts around 80,000 visitors each year to Loch Faskally in Pitlochry throughout the month of October. The 2019 event, entitled Cosmos, is inspired by the vastness and natural beauty of the skies that … END_OF_DOCUMENT_TOKEN_TO_BE_REPLACED 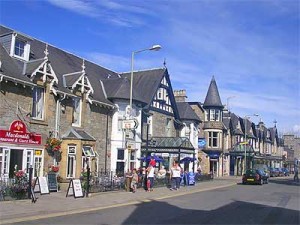 Pitlochry is one of the most visited towns in Perthshire and can be found in the geographical centre of Scotland. It is a well-known local saying that a map of Scotland can balance on the top of your finger under Pitlochry. Whether this is true or not, fact is that It's a quaint Victorian Spa town just off the A9, 26 miles north of Perth and south of the Cairngorms National Park. Pitlochry's main tourist attraction is its setting, with the surrounding mountains attracting hillwalkers and climbers. There is lots to see and do in and around the town, whether you are there for the day or for … END_OF_DOCUMENT_TOKEN_TO_BE_REPLACED