Scotland is the second largest country in Great Britain. It is bordered on the west and north by the Atlantic Ocean; on the east by the North Sea and on the south by England. 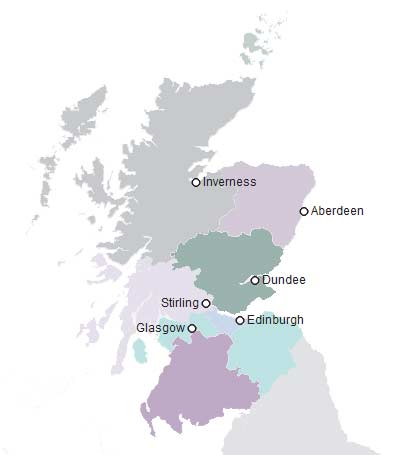 Area: 78,789 sq km (30,420 sq miles) including the islands. About twice the size of the Netherlands and almost the same size as South Carolina in the US. Scotland counts 787 islands from which around 130 are inhabited.

Currency: Pound Sterling consisting of the following coins: 1p,2p,5p,10p,20p,50p,£1,£2 and notes: £5, £10, £20, £50, £100
In most countries, the issue of banknotes is the prerogative of the government and its central bank. In Scotland, however, for historical reasons three of the Scottish banks continue to exercise a privilege which first came about in the 17th century. These banks and their notes are the Bank of Scotland, the Royal Bank of Scotland and the Clydesdale Bank