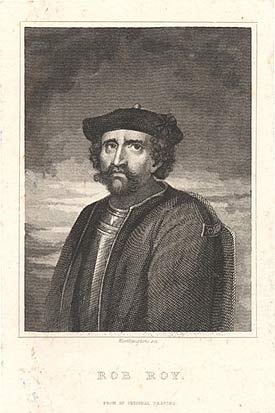 Everyone has heard of Rob Roy, that most famous of the McGregor clan. He was a giant of a man with red hair and arms so long that it was said he could tie his garters without even stooping. As a younger son he knew that he was unlikely to take over his father’s farm at Glengyle and therefore he became a drover.

He was very successful with his projects and was able to buy a farm at Balquhidder on land adjoining that of the Duke of Montrose. They became partners in the cattle business and for three years did extremely well. Then Rob Roy’s assistant who had been given £1,000 to buy cattle absconded with the money.

The Duke insisted that his share of the cash should be repaid immediately and when Rob Roy was unable to do this he sent his factor in to Balquhidder to take possession of Rob’s farm and the goods therein. It was the start of a thirty year skirmish between Rob Roy and the Duke and though the power lay with the Duke the victory was with Rob Roy.

He was not without friends in high places himself. His wife was a Campbell and for three years the Earl of Breadalbane made Rob a bailie and also provided him with a house at Corriechaorach. Today the gable end still stands and can be seen above the road between Killin and Crianlarich.

When Rob’s term of office came to an end he was forced to use less legal methods of earning a living. With a band of some twenty followers he systematically plundered the estates of the Duke of Montrose, generally in broad daylight, leaving a receipt for the goods he had taken. He was once persuaded to go to Dunkeld under promise of protection by the Duke of Atholl but when there he found himself surrounded by armed men and was taken prisoner. He asked to be lodged in the prison at Logierait and this request was granted. Meanwhile word was sent to Perth to bring a force of one hundred men to escort him there.

When they arrived Rob had already escaped having drunk his guards under the table. In a letter to his father, Lord Glenorchy writes ‘All I hear of R.R. is that there is above an hundred men of the forces quartered in Inversnaid and that he lately disarmed 40 or 50 of the Duke of Montrose’s tenants that were in pursuit of thirty cows taken out of the parks of Buchanan; and in two days thereafter went in daylight to Montrose his girnel (granary) and ordered a chalder (rather more than one ton) of meall to be weighed to him, which he carried off.’

When the Duke of Montrose complained in the House of Lords that the Duke of Argyll was protecting a robber Argyll replied that if he was protecting a robber Montrose was certainly feeding him. One of the most famous episodes of Rob’s war against authority concerned the occasion when a force of forty men and an officer were sent from Inversnaid to capture him. Of course Rob knew of their arrival at Tyndrum and disguising himself as a beggar entered the inn.

He was made the butt of some of the soldier’s jokes and pretending to be very angry he threatened to tell Rob Roy, who he said, would soon show them what happened to people who made fun of a defenceless old man. The soldiers were interested. Did the beggar really know Rob Roy, and more important, did he know where he was staying? After some feigned reluctance the beggar agreed that not only did he know Rob Roy, but that he would be willing to take them to where he was staying. He even carried them one by one across the Fillan Water at Dalrie Ford, charging them each a penny for the service. When they approached Corriechaorach he told them to stop. He would go on ahead to allay any suspicions.

After half an hour the officer and two of his men were to come up to the house and order all within to surrender. The plan worked perfectly except that when the King’s men entered they were immediately disarmed and threatened with death should they make any sound. Rob then went to the door and called in two more soldiers. So it went on until eventually all forty were disarmed. Next morning they were given a good breakfast and sent on their way promising to return to Inversnaid without trying any further tricks. The weapons remained with Rob Roy and his followers.

For a man who lived almost all his life at odds with authority it is rather wonderful to know that eventually he died in his own bed. It is said that he became a Roman Catholic and at the priest’s insistence forgave all his enemies. Then he turned to his son Robin Og ‘Look you to them,’ he hissed. Then he called his piper to play a lament and was dead before it ended.

His funeral at Balquhidder Kirk was attended by hundreds of people from far and wide in tribute to a great man who was no friend to authority but a great friend to the people.