The Isle of Muck is the smallest, but the most fertile of the Small Isles, but has a very interesting shape which means a lot of its treasures are hidden from view – you just have to walk round the island to find them! The island measures 4 km (2.5 miles) from east to west and has a population of about 30. There is a primary school on the island, but no resident doctor. The only road on the island stretches for a grand total of 1.5 miles. The name Muck may derive from the Gaelic for pig and refers to porpoises.

In 1828 the MacLeans evicted Muck and 150 people travelled to Cape Breton. The remaining population was allowed to build houses in the village above Port Mòr and tried to make a living by fishing. However, by 1835 they had either emigrated or migrated elsewhere in Scotland. Sheep were introduced to the island for the first time in 1836. In 1845 Muck was let to James Thorburn, who installed a threshing mill and reputedly ploughed the whole island. The big pier at Port Mòr was also built, as was the road. In 1878 Muck was let to David Weir, who developed a dairy farm.

In 1896 Muck was sold to Robert Lawrie Thomson, who owned Eigg and Strathaird Estate on Skye. Thomson died in 1913, and Muck was left to his older brother, John MacEwen. When John died in 1916, he left Muck to his nephew, Lieutenant William Ivan Lawrence MacEwen, who left the Navy, retrained and took over the farm in 1922.
In 1939 MacEwen was recalled to the navy to fight in WWII. His wife, Edith, took over the running of the farm at Gallanach. After the war, the Department of Agriculture paid for half the cost of a modernisation scheme, which included piped water and Rayburn cookers for every house. Tilley lamps were the means of lighting. 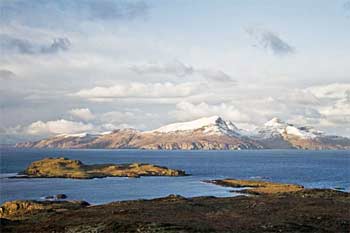 In 1967 Commander MacEwen died and the farm passed to his eldest son, Alasdair, who farmed the island before moving to the mainland. The farm was taken over by his brother, Lawrence, who continues to farm the island. Lawrence’s younger brother, Ewen, returned to the island in the early 1970s, and built and established the Hotel at Port Mòr.

There are several ancient monuments to visit on this small island. Muck is probably the easiest of the Small Isles for walking; that doesn’t mean the landscape is not interesting. It is a gem of an island with surprises round every corner. The islands’ highest hill is Beinn Airein. At a modest height of 137 metres (449 ft) it is not too strenuous a climb and overlooks the marvellous beach of Camus Mòr. There is plenty of wildlife to look for as well, from the majestic Golden and Sea Eagles to the many tiny plants adorning the ground in summer. Until 1922 Muck was treeless apart from a few poplars on the cliff on the west side of Port Mòr. In that year three small plantations were established both for shelter and amenity. Further plantings of all the commoner native British species followed and sheltered plantations continue to thrive in the island’s mild winters and cool summers.

There is a craft shop/restaurant open in the summer months, a hotel, several self-catering cottages and Rosie’s bunkhouse. If you’re staying on the island it is necessary to take all food provisions with you as there is no shop on the island. The Community Hall opened in May 2012 and is an excellent venue for all sorts of community and private functions, including weddings, ceilidhs, talks and sporting activities. Visitors are warmly welcomed to the island and invited to take part in any event that happens to be going on at the time of their visit. 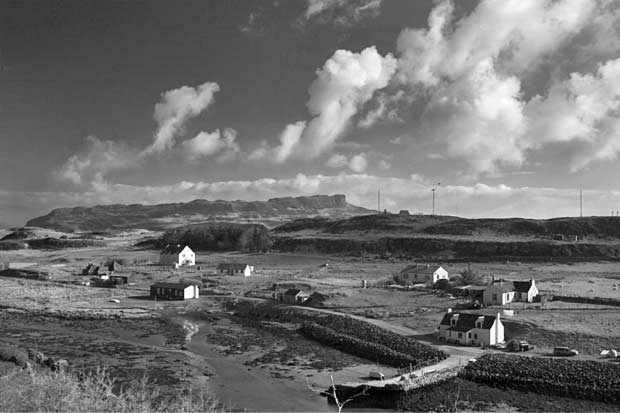 Continue to Isle of Canna