Glasgow might not be the capital of Scotland but it is on a par with its Eastern sibling Edinburgh for historic significance and attractions that keep people coming back. Glasgow is the largest city in Scotland and has a population of almost 600,000, the total metropolitan area has 1.7 million people. The city is situated on the River Clyde in the country’s west central lowlands

Glasgow grew from the medieval Bishopric of Glasgow and the later establishment of the University of Glasgow in the 15th century, which subsequently became a major centre of the Scottish Enlightenment in the 18th century. From the 18th century the city also grew as one of Britain’s main hubs of transatlantic trade with British North America and the British West Indies. With the Industrial Revolution, the city and surrounding region shifted to become one of the world’s pre-eminent centres of Heavy Engineering, most notably in the Shipbuilding and Marine engineering industry, which produced many innovative and famous vessels.

Visitors to the city can expect a vibrant and welcoming atmosphere with art, culture, music and many other attractions. It makes Glasgow one of the best European destinations and a must visit when you’re holidaying in Scotland.

One of Glasgow’s best loved galleries is the, free to enter, Kelvingrove Art Gallery and Museum located on Glasgow’s Argyle Street. Home to fantastic exhibits and collections, perhaps the most famous painting on show here is the 1951 Salvador Dali work, Christ of St John of the Cross. The painting was purchased by the city of Glasgow in 1952 and has been a fixture ever since. The most important collection in Kelvingrove must be the one of the “Glasgow Boys”, a group of twenty artists of which around 140 paintings can be seen in the museum. For opening hours, exhibitions and directions visit www.glasgowlife.org.uk

Since its opening in 1996, the gallery has hosted several million visitors.It has a dedicated Education and Access studio, facilitating workshops and artists talks and in the basement a Learning Library.

Exhibits include works by David Hockney, Sebastiao Salgado, and Andy Warhol as well as Scottish artists such as John Bellany and Ken Currie. In front of the Gallery is a statue of the Duke of Wellington, usually with traffic cone! Entry is free. museum website

The Riverside Museum opened its doors in 2011 and has already seen well over 4 million visitors since. It’s officially called Scotland’s Museum of Transport and Travel and it has a stunning collection of things on wheels, from your first Austin to a South African Railway Locomotive and almost everything in between. And this is not all. Outside the museum, on the Clyde Side, is the Tall Ship Glenlee, which was built in Glasgow and is open to the public. The Tall Ship gives a fascination look into life on a big sailing ship. Museum visitors are free to roam around the ship which also has a shop and a cafe. The Riverside Museum can be found west from the SSE Hydro, some 45 minutes walking along the Clyde from the City Centre. The Riverside Museum is free of charge.

The Glasgow Science Centre, neighbouring Imax Theatre and Glasgow Tower can be found roughly opposite the Riverside Museum, on the south bank of the Clyde, next to the BBC Scotland building. This is very much a “Hands On” museum spread over three floors. Glasgow Science Centre is one of Scotland’s must-see visitor attractions. It has lots of activities to keep visitors of all ages entertained for hours. There are two acres of interactive exhibits, workshops, shows, activities and a stunning planetarium. Nextdoor is the Imax Theatre, not connected to the museum, and the Glasgow Tower, open to the public, weather permitting. Glasgow Science Centre is a paid-for museum and very much worth the entrance fee. You can easily spend an entire day here. Official website

The People’s Palace and Winter Garden 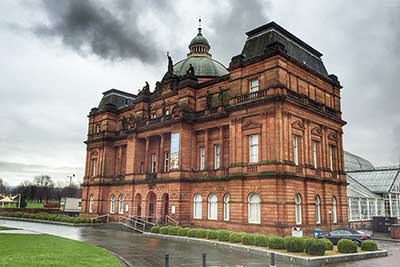 The People’s Palace can be found on Glasgow Green, Glasgow’s oldest park, and tells the story of Glasgow and its People. It’s not as “Grand” as Kelvingrove as it’s a lot smaller, and more intimate, but if you have a fascination for Glasgow you must visit this free museum. It tells the story from 1750 onwards through objects, paintings and photographs. Attached to the museum is a beautiful winter garden, a pleasure to visit on those cold and rainy days. It also has a cafe with good coffees and snacks, as most museums have these days. On a warmer day the fountain in front of the Museum is a pleasure to visit. More info: www.glasgowlife.org.uk

Other Museums in Glasgow

Apart from the ones above there are a few more museums worth visiting such as The Burrell Collection in Pollock Country Park, St Mungo’s Museum of Religious Life and Art next to Glasgow Cathedral and Necropolis, The Hunterian Museum opposite Kelvingrove and the Scotland Street School Museum south of the River Clyde, designed by Charles Rennie Mackintosh. Speaking of the latter, Mackintosh was the founder of the Glasgow School of Art which can be visited, although the Mackintosh Building is currently closed for renovation after a devastating fire in 2014.

Visiting a graveyard might not be your first priority when you visit a city but the Necropolis in Glasgow is well worth it. It is located east of the Cathedral on a prominent hill overlooking much of the city centre. The Necropolis has been described as a ‘unique representation of Victorian Glasgow, built when Glasgow was the second city of the empire. It reflects the feeling of confidence and wealth and security of that time. It is a memorial to the merchant patriarchs of the City and contains the remains of almost every eminent Glaswegian of its day.
Glasgow Cathedral stands proudly in the heart of Glasgow, almost embraced by the Royal Infirmary. Glasgow cathedral is the only medieval cathedral on the Scottish mainland to have survived the Protestant Reformation of 1560 virtually intact. It is the finest building of the 1200s now surviving in mainland Scotland but parts of it are even older.

Glasgow Botanic Gardens is an arboretum and public park located north of the University and Kelvingrove Art Gallery. It features several glasshouses, the most notable of which is the Kibble Palace which has recently been restored. The gardens were created in 1817, and run by the Royal Botanic Institution of Glasgow and were intended to supply the University of Glasgow. The gardens were originally used for concerts and other events, and in 1891 the gardens were incorporated into the Parks and Gardens of the City of Glasgow. The gardens have a tea-room and are open all year. For more info visit www.glasgowbotanicgardens.com

Other attractions in Glasgow

For sporting history and in particular football you have the Scottish Football Museum housed at the national stadium, Hampden Park. You can also get stadium tours here as well as at the world’s most successful club Rangers Ibrox Stadium and at their city rivals Celtic Park.

If you are looking for something a little bit different you can even visit the Auchentoshan distillery and find out more about the process that happens to create your favourite Scotch Whisky. Based on the outskirts of Glasgow it is a great opportunity to see how one of the lowlands distilleries runs.

For those looking for shopping, Glasgow is home to some of the top names in fashion with Buchanan Galleries, the St Enoch Centre, with Debenhams, and the Italian Centre near George Square housing a great many wonderful shops under cover.

Countless other shops can be found on the Style Mile, the heart of Glasgow Shopping, which includes parts of Argyll Street, Buchanan Street and Sauchiehall Street. From a shopping point of view Glasgow is the best city in the UK after London.

Eating out in Glasgow

Glasgow is also renowned for its interesting nightlife and for the many restaurants, pubs and clubs as well as some of the most popular music venues in Europe. The City Centre and West End, Byres Road in particular, have a large number of restaurants in all varieties and price ranges. When on Byres Street go into the University Cafe, almost unchanged since hundred years. They serve good food and have great Italian Ice Cream. If you fancy Italian food try La Vita Pizzeria in the south-west corner of George Square or the slightly more expensive and modern Prezzo, at the corner of Buchanan Street and St Vincent Place. Both restaurants are best to be booked in advance.

As far as music venus go you are spoiled for choice, the previously mentioned football stadiums have all held large scale tours and the SECC has played host to many of the bigger stars. The newly built Hydro and the Armadillo make the SECC a great multipurpose venue. In the heart of the city you have the O2_ABC. At the top of Buchanan Street is the Glasgow Royal Concert Hall where “Celtic Connections”, the annual Celtic music festival held in January and February, is one of their highlights of the year.

North of Glasgow Green is the Barrowland Ballroom. This venue is widely regarded as one of the best music venues around. After starting its life as a dance hall as the name suggests it is more commonly used as a music venue now. You also have King Tuts Wah Wah Hut, this intimate venue is where Oasis where spotted by creation records Alan McGhee making it a must see for any music fan.

If you’re more into live traditional Scottish Music and prefer a somewhat smaller venue why not visit the Park Bar in Argyle Street. They often have live traditional music and many famous Scottish Bands have performed here.

Glasgow International Airport is a few miles to the west with an excellent shuttle bus service, every 10 minutes, to the city centre. There are also a number of car parkings dotted around and in the city centre. Glasgow City Centre is quite friendly to drive in as it is compact, and many roads only allow one way traffic while the Motorway is always nearby.

A good alternative of the car is to visit the city by train when you use one of the many park and ride’s around the city. Or choose one of the smaller towns and villages near the railway lines to jump on the train. Glasgow Queen Street Station, Argyll Street and Glasgow Central Station are all located almost in the heart of the city from where it’s a few hundred metres or less to the nearest shops.

By far the easiest way to move about from one part of the City Centre and Glasgow West End to the other is the Subway. The Glasgow Subway consists of two lines, both circular and next to each other. The inner ring runs counter clockwise and the outer one runs clockwise. Trains run every four minutes at peak times and it takes less than half an hour to complete the ring and fifteen stations. Costs are as little as £1.40 for an adult single to travel anywhere else on the system. A day ticket is £2.70 for an adult and £1.35 for a child. For more info visit www.spt.co.uk/subway/

Besides the subway there’s an excellent bus system in Glasgow connecting the City Centre with the surrounding area. If you rather prefer a Taxi you’ll find these on almost every street corner. To book or for more info visit www.glasgowtaxis.co.uk

With all these options available for you, plus countless others Glasgow proves itself to be one of the most popular city break destinations in the UK.

Image of Kelvingrove by PhillipC, licensed under creative commons