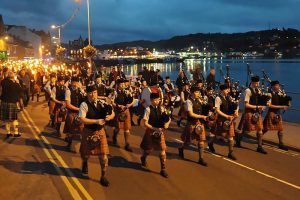 The Royal National Mòd is the main annual festival and celebration of Scottish Gaelic language and culture, song and arts. It's often referred to simply as the Mòd and is usually held in October. The Royal National Mòd is organised by The Highland Association which was founded in Oban in 1891. Scotland’s premier Gaelic festival provides opportunities for people of all ages to perform across a range of competitive disciplines including Gaelic music and song, highland dancing, instrumental, drama, sport and literature. The Gaelic culture is nowadays mostly present in the Outer Hebrides, some … END_OF_DOCUMENT_TOKEN_TO_BE_REPLACED 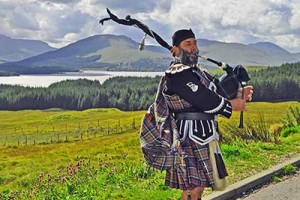 Guest Writer Neil Clark writes about Bagpipes: Most people think of bagpipes as an exclusively Scottish instrument. This isn’t really the case, as pipes have existed in many countries since ancient times. In fact, it has been claimed that Nero didn’t fiddle as Rome burned, but played the pipes. Well, maybe. And the pipes still exist in many forms, all over the world. But here, we’re talking about a particular form of pipe, namely the "Great Highland Bagpipe", and few could argue that the Scots haven’t made it their own. Even today, when two pipe bands from Canada and one from the Republic … END_OF_DOCUMENT_TOKEN_TO_BE_REPLACED