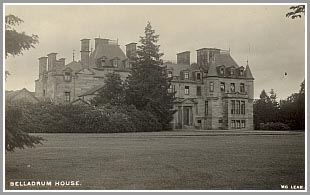 Belladrum Estate was once part of the lands owned by the Lords of Lovat, chieftains of the Clan Fraser, to whom belonged much of the land in the area and stretching to the South and West. From them it came into the ownership of the Frasers of Belladrum, whose memorials you can see in Wardlaw Church in the nearby village Kirkhill, and who raised the Regiment of Fraser Fencibles during the Napoleonic Wars. In the 1820s, the Belladrum Frasers sold their estates to merchants by the name of Stewart. They in turn sold in 1857 to James Merry of Belladrum. MP for the Burghs of Falkirk, and an ironmaster from Glasgow. Davina Merry, the mother of the current owner, was the last of the name of Merry to own Belladrum. In 1977, Davina sold Belladrum and it was split up into many parts by its new Dutch owners who operated as asset strippers. In 1987 the new owner repurchased Phoineas House, which had become the main house on the estate since Davina’s father, Eion Merry, was forced to pull down old Belladrum House. The new owner then gradually re-assembled the heart of the old estate including the home farm and woodlands. Belladrum House had been considerably enlarged by James Merry on acquiring it, using the services of the well known Scottish architect David Bryce. After the Second World War, it proved too large to staff and though offered to a number of schools and institutions, proved to be unsuited to them.

The Clan Fraser is a Scottish clan of Gaulish origin. The current chief of Clan Fraser is Flora Fraser, 21st Lady Saltoun but the chief of the Frasers of Lovat and overall Fraser chief is Simon Fraser, 16th Lord Lovat, grandson of famed Commando of the Second World War. He is traditionally referred to as the “MacShimidh,” Gaelic meaning “Son of Simon.” Simon is the traditional name for the chiefs of Clan Fraser, and the name of the Fraser from whom all Frasers of the Clan trace their lineage (Simon Fraser the Patriot). Clan Fraser of Lovat traces its heritage from Sir Simon Fraser, brother of Sir Alexander Fraser, Robert the Bruce’s Chamberlain, whom Clan Fraser traces from. Sir Simon acquired the Bisset Lands around Beauly when he won the hand of its heiress, and these lands became the family home.

These days Belladrum is still a wonderful estate and much of its former glory has been restored. The Belladrum estate, located near the town of Beauly and close to Inverness, is home to a few unique holiday cottages, both graded 5 stars by the STB, and has a unique wedding chapel. The website from the Belladrum Estate gives information about Belladrum, the cottages, getting married at Belladrum and presents information about their annually tartan heart festival in August. On the Belladrum estate are wonderful tracks through the woodlands offering wonderful views over the nearby valley. Wildlife is present almost everywhere, owls, foxes, deer and lots of birds give the estate a friendly character. Belladrum also hosts some of the tallest trees in Scotland.

This webpage is made together with Marnie who is keen to receive any information possible about Belladrum House in the early days. One of her husbands great aunts lived and worked there in the 1920’s? On one of the postcards now scanned as images she writes on the back that she went to Kiltarlity post office and saw a large announcement of the concert she would be playing at the parish hall, (also a photo) on the piano forte. She mentions a Miss Rider who says that she will be stared at by everyone coming with Mrs Merry who is the principal person here. If anyone knows anything about the great house, what is was used for etc I would love to talk to you. Marnie can be contacted by email 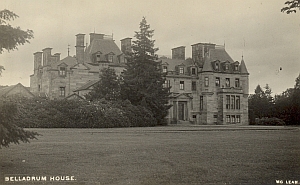 Text on the back of this card
This is the front view of the house!? bit boring 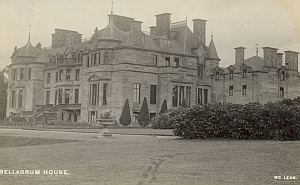 Text on the back of this card
This is a very good view, now you can see more what the house is like. My bedroom is over the steps, I will explain when I come home the rooms I know. I hope you will not have to pay on this being in the envelope. Babs
Written to her mother Mrs W. J. Goodwin, 2, The Palms, Sturry, Kent, England 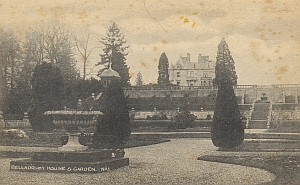 Text on the back of this card
I shall be home on Saturday by the motor, gets to Sturry at 2.35. I have to sort out my luggage and just take what is necessary to London if Auntie Emmie can have me two nights so that I can see Dorothy. We got here (London)? yesterday tea-time 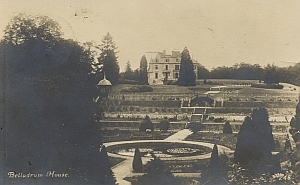 Text on the back of this card

This shows the house in the distance and is only a side view: this is the steps you see are leading out of Eions school room. The is over a foot of snow but we do not feel cold as the house is heated all over and the air is cold but very lovely as there is no wind. Written to her sister Mrs E. M. Hankin at The Red House, Devonshire Gardens Cliftonville, Margate, Kent, England 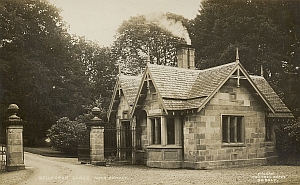 Text on the back of this card
My evening dress came today its saxe? blue very simple, and only 21/11, auntie also sent a petticoat 4/11 3/4 so its a cheap outlay. How funny you should have seen a pretty dress at Hunts that day. I did not think of asking you to get one there as they are generally rather dear. This is Belladrum Lodge gates, so you can picture us. I was interested in Miss Moats wedding you sent, the Archbishops gift was splendid. I also noted Mildreds letter and agree with your reply to her. I hope you and Dad are still well, Mrs Sworder sends Lu, she tells me to see how you are for me. Babs. 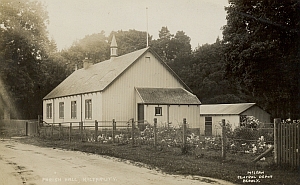 Text on the back of this card
This is where I am playing on Friday. Miss R. & J . went to Kiltarlity Pt. Office today and we saw a large announcement of the concert on which was Miss Goodwin “Belladrum” will give piano forte soloes. The post mistress said We are going to have an “artist” from Belladrum little thinking the “artist” was in front of her.! Miss Rider says I shall be stared at by everyone coming with Mrs Merry who is the principal person here, isint it amusing, its to be hoped my dress will come.