The Isle of Jura is not an island for an impromptu visit since it doesn't have a direct car ferry link with the mainland. Only in the summer there is a passenger ferry, a RIB for 12 persons, operating a service from Tayvallich on the mainland to Craighouse on Jura. So Jura is quite remote and one of the few inhabited islands in Scotland not being serviced by Calmac directly. The only car ferry to Jura is operated by the Argyll and Bute Council and sails between Port Askaig on the Isle of Islay to Feolin on Jura. It's a five minute crossing over the Sound of Islay, the fast flowing channel that … END_OF_DOCUMENT_TOKEN_TO_BE_REPLACED 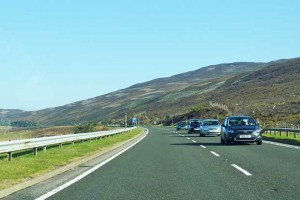 Those of you who frequently, or occasionally, travel to the north of Scotland know that the A9 between Perth and Inverness, a total of 112 miles, is not the most pleasant road to drive, and not the safest either. The scenery might be breathtaking in most places but quite frequently, especially in the busy season, there are traffic jams due to roadworks, accidents or very slow moving vehicles. When you're lucky and find yourself on a section of dual carriage way you can overtake but as soon as that ends the road becomes single carriageway again. As slow moving vehicles also make use of the A9 … END_OF_DOCUMENT_TOKEN_TO_BE_REPLACED