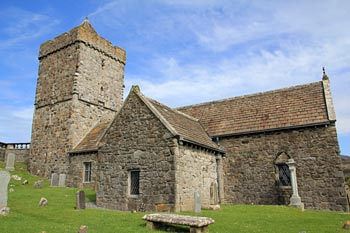 MacLeod clan chiefs of Dunvegan and Harris built the beautiful St Clement’s church as their burial place in about 1520. Although many of their tombstones survive, the exact location of the MacLeod graves is uncertain.

St. Clement’s fell into ruin after the Protestant Reformation of 1560. It was rebuilt just over two centuries later by Captain Alexander MacLeod, but within three years substantial repairs were required after the church was damaged by fire. In 1873 the building was restored by the Countess of Dunmore.

St Clements Church can be found in Rodel, at the southernmost tip of the Isle of Harris, a few miles from Leverburgh, at the start of the fascinating Golden Road.