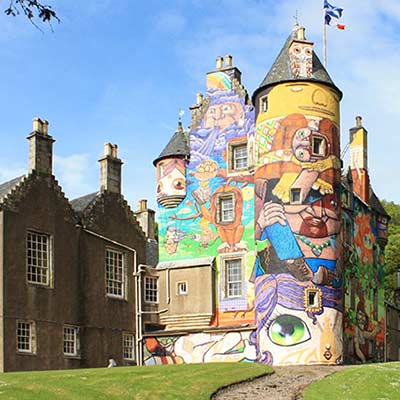 A little over 30 miles to the south-west of Glasgow, in North Ayrshire, you’ll find Kelburn Castle and Country Centre, set amidst some of Scotland’s most beautiful woodlands. Based around a 13th century castle that’s had a unique makeover, Kelburn Country Centre features exciting play areas, breathtaking woodlands and glen, beautiful gardens and many features of historical interest. The Kelburn grounds have been owned by the Boyle family since the 1100s. The historic house is packed full of heritage and tradition. Tours are run daily throughout the summer months and give an insight into the vast history.

Graffiti on a 13th Century Castle?

The fact that this beautiful castle has a huge mural painted on it makes it rather unique but can be shocking at the same time. To understand why this is done I quote their website: “The idea was simple and original: take the vibrant and often transient art form of Brazilian graffiti, out of its predominantly urban context and apply it to the ancient and permanent walls of a historic rural castle in Scotland. Kelburn brought together four of the world’s leading graffiti artists from Brazil to work alongside Scottish talent, to create a unique burst of colour, embracing the walls and turrets of the south side of Kelburn Castle. On a building steeped in rural conservative perceptions, this bold and shocking artistic statement received huge media attention, while challenging the public’s understanding of both urban graffiti art and the British institution the building represents.”

The Kelburn Glen, with its waterfalls and deep gorges, is regarded as one of Scotland’s most beautiful woodlands and leads to spectacular views over the islands of the Firth of Clyde. The burn runs down through the grounds and its largest waterfall is just metres from the castle. 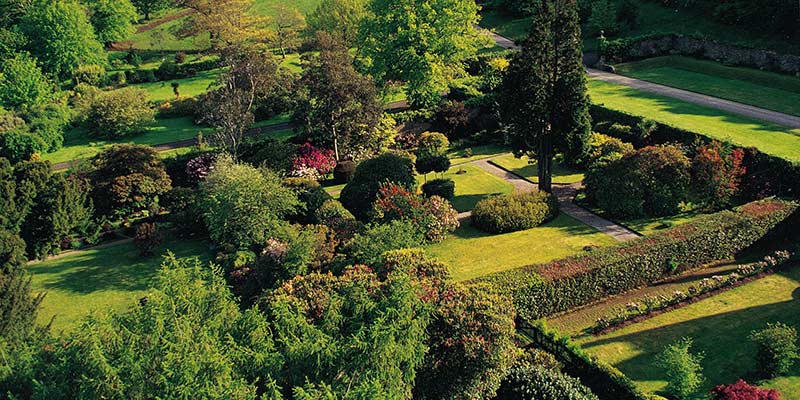 The garden is an eclectic collection of shrubs and herbaceous plants, which has evolved over time and shows the horticultural interests of the various Earls and Countesses of Glasgow. There is colour in the garden almost all year round with stunning rhododendrons, magnificent magnolias and cherry blossom. 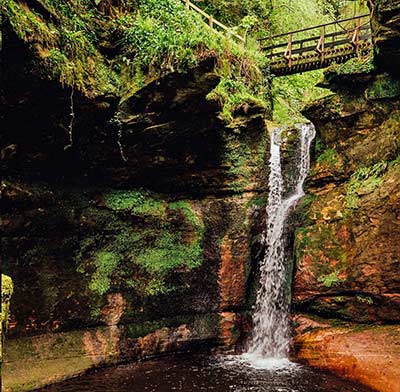 There’s always something to keep the kids occupied at Kelburn. The most popular attraction is the magical Secret Forest – a complex of woodland paths and raised walkways with fairy tale surprises at every turn, including the Giant’s Castle and the Crocodile Swamp. There’s also the Adventure Park, the Wild West Saloon, and the indoor soft play barn – a soft play maze of tunnels, slides and dens. There’s plenty of spaces that are perfect for a picnic, including one by the majestic waterfall, or retreat to the Courtyard Café for a cooked meal. And after you’re fed and watered, you can join the Rangers to feed the animals, consisting of cheeky chickens and greedy goats!

Camping and glamping are available at Kelburn. Stunning yurts are pitched on a hillside, with views over the Firth of Clyde and across to Arran. Bring your own or hire a bell tent in the Centre’s campsite, which is just a short walk from all the action.

Kelburn is constantly changing, with surprising artwork featured throughout and events taking place during the year. There’s also something new to spot. A perfect day out for all. For more info visit www.kelburnestate.com