The Scottish Borders are home to a number of ruined, yet magnificent Abbeys, which were all founded in the 12th Century. The best known four are Jedburgh, Melrose, Kelso and Dryburgh Abbey. The story of the Border Abbeys is one from building, attacks by the English and rebuilding. But most of all it’s a story of various orders of Monks who represented their order and made the journey from the European continent through England and ended up in the Scottish Borders to live in their holy abbeys and practice their religion.

Christian monasticism is the devotional practice of individuals who live ascetic and typically cloistered lives that are dedicated to Christian worship. It began to develop early in the history of the Christian Church which was the origin of the formation of the monastic orders who lived by a particular religious rule. The orders that were responsible for and lived in the four Border Abbeys are: 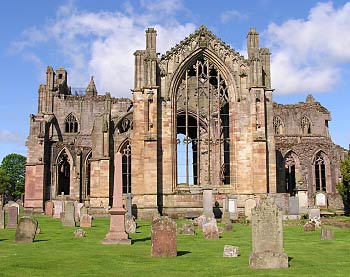 The best preserved and best known abbey is Melrose Abbey, which was founded in 1136 by Cistercian monks, on the request of King David I of Scotland. It was headed by the Abbot or Commendator of Melrose. Today the abbey is maintained by Historic Scotland. The ruins of Melrose are widely considered among the most beautiful of religious houses in the United Kingdom, being especially notable for a wealth of well-preserved figure-sculpture, and its architecture is considered to be some of the finest in Scotland. The east end of the abbey was completed in 1146. Other buildings in the complex were added over the next 50 years.

The abbey was built in the form of a St. John’s cross. A considerable portion of the abbey is now in ruins, though a structure dating from 1590 is maintained as a museum open to the public. Alexander II and other Scottish kings and nobles are buried at the abbey. The embalmed heart of Robert the Bruce is also said to rest on the abbey’s grounds, while the rest of his body is buried in Dunfermline Abbey. It is known for its many carved decorative details, including likenesses of saints, dragons, gargoyles and plants. On one of the abbey’s stairways is an inscription by John Morow, a master mason, that says: “Be halde to ye hende” (Keep in mind, the end, your salvation), which has become the motto of the town of Melrose.

Melrose Abbey on the Map

In 1385 the Abbey was burned by the army of Richard II of England as he forced the army of Robert II of Scotland back to Edinburgh. It was rebuilt over a period of about 100 years-construction was still unfinished when James IV visited in 1504. In 1544, as English armies raged across Scotland in an effort to force the Scots to allow the infant Mary, Queen of Scots to marry the son of Henry VIII, the Abbey was again badly damaged and was never fully repaired. This led to its decline as a working monastery.

Dryburgh Abbey was established in 1150 by an order of Premonstratensian monks. These white-robed monks, who had their religious roots in France and Northumberland, lived a life of simplicity. Set on the bend of the River Tweed, Dryburgh is considered the most evocative monastic ruin in Scotland. Sir Walter Scott is buried here in the North Transcept of the Church. The Cloister and Chapter House are extremely well preserved. A spiral staircase leads to the top for a dramatic view of the Sacristy. The peaceful setting of Dryburgh Abbey acted as the ideal secluded spot. 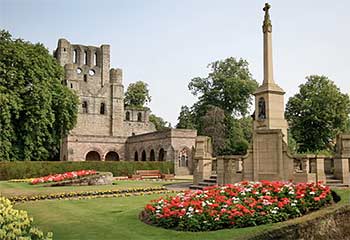 Kelso Abbey was founded in the 12th century by David I and was the oldest and the wealthiest of the four abbeys and gained much of its income from its vast estates in the Border country. It suffered from wars with England and was severely damaged in 1545. Situated in the middle of Kelso Town, it is the focus and main attraction of the region and its ruins are well preserved.

Jedburgh Abbey was established by Augustinian monks, first as a priory and its status was raised to abbey in 1154. The abbey was founded by King David I in 1138 to demonstrate his power. The Augustinians monks were linked to the royal house and Jedburgh was no exception. Alexander II of Scotland was married in the abbey in 1285 and according to legend a ghost appeared at the marriage ceremony foretelling Alexander’s death. Alexander died in 1286, a year after the alleged premonition. This Abbey church has many interesting architectural features including a rose window. Situated on a prominent rise in the town of Jedburgh it is another remarkable ruin worth visiting.

Video Jedburgh Abbey from the Air