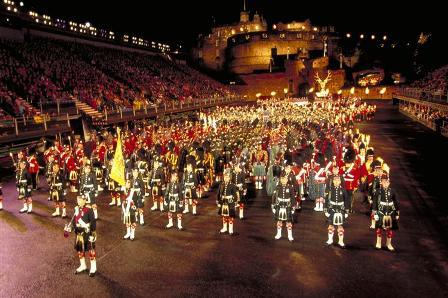 The term ‘military tattoo’ originally meant a military drum performance, but it has now come to mean army displays in general. It dates from around the 1600s, and was used during the Thirty Years’ War in the Low Countries. Drummers from the garrison were sent into the towns at 9:30PM each evening, in order to inform the soldiers that it was time to return to the barracks. The whole process was known as doe den tap toe, which was Dutch for “turn off the tap”. It was basically an instruction to the innkeepers that they were to stop serving beer to the soldiers and sent them home for the night.

It has turned into more of a show over the years; intended to keep the soldiers in check, heighten their loyalty and respect, and show off their skills to the rest of the world. They draw in people from all across the region, even from other companies, and are a fantastic way to gain respect and renown for the soldiers who put their lives on the line for their country.

The Esplanade in front of Edinburgh Castle is home to arguably the most famous military tattoo in the world today. It is held each August as part of the annual Edinburgh Festival, and people travel from far and wide to experience its magic. First staged in 1950, the Edinburgh Military Tattoo combines the modern aspects of the armed forced with the traditional sounds of bagpipes and drums

In 2010, Graham Jones was the Principle Director of Music for the Show. He has worked with many military tattoos around England, and is well respected in the field. Jones is a Lieutenant Colonel, whose military career began when he joined the Royal Artillery Band. He had the privilege of being tutored for the harp, under one of the most famous harpists around – Maria Kachinska.

1981 saw him enrolling in the Bandmaster’s Course at the Royal Military School of Music, and he went on to be appointed Bandmaster of 16/5 The Queens Royal Lancers. During this time he was given the honour of being made a Member of the British Empire, due to his outstanding services to the Regiment.

Jones was appointed as Director of Music for The Lowland Band of the Scottish Division in 1994, and three years later moved to the Band of the Light Division. He was promoted to Major during his time with this Band, and posted to Headquarters Army Music at Kneller Hall, as Office Commanding the Training Development Team.

Jones has been so influential in the area of military music, that he has even pioneered the Army accreditation programme, which is linked to the Trinity College of Music. He has earned a Masters of Music degree from the University of Reading, and a Doctorate of Music Arts.